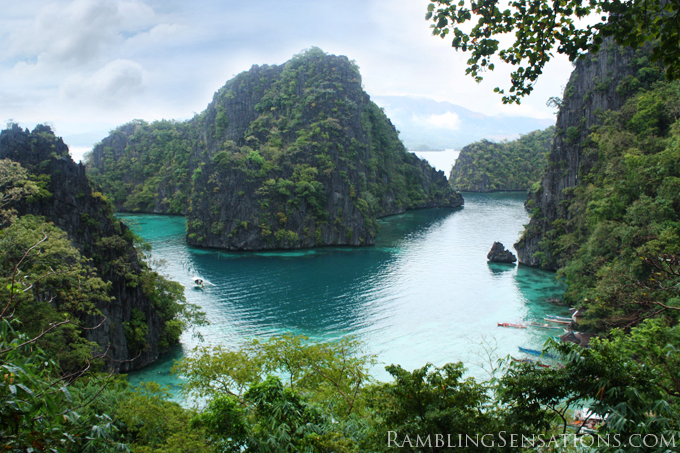 DIY Coron-Day 1. Despite the setbacks I’ve had with Airphil Express (they re-scheduled our flight to 10:00Am instead of 8:00AM which was what originally appeared on their website when I booked the tickets online, and was later delayed for more than one hour,) my visit to Coron was still the easiest to plan and the most relaxing DIY trip I have ever made so far. I was fortunate to have found Jong ( boatman/travel guide-09084499523) online and I decided to avail his services for our island hopping tours after reading a lot of positive feedback about him from his previous clients. He helped me plan our itinerary for a 3-day, 2-night stay in Coron arranging everything for us from transportation to accommodation, and even offered to buy us food supplies without asking for a deposit. He was nice and easy to talk with, and I had never felt that he was taking advantage. All the prices he mentioned during our conversations were true based on the information I gathered from the internet.

As soon as we got out of the Busuanga Airport, we found the driver that Jong contacted. We got in the van and we immediately made our way to Coron. Along the way, it began to rain. Oh, my gulay! My mind went into overdrive. We had already lost 3 hours at NAIA, and if the rain wouldn’t stop, what’s going to happen to our scheduled island hopping tour on our first day?

We reached Coron in 30 minutes and fortunately, it had stopped raining. Our driver took us to the pier where I and Jong met in person for the first time, our “eyeball” moment. He seems to be a nice guy. He told us that our lunch was ready and we were set to go. And, he’s not going with us. Huh?! I thought he said he would be our boatman/guide for our island hopping tours? He apologized and said it was his wife’s rest day and wanted to spend the day with her.

Jong introduced us to his younger brother Jerson and his assistant Budoy and told us that they would be the ones to assist us during the tours. Jerson was quite shy but seemed to be a nice guy too just like his older brother. Well, it wasn’t really a big deal for us not having Jong around as our boatman/guide. He had helped me with planning the tour which is what I consider the most difficult stage of a DIY trip, and at that point, I thought there’s nothing else that Jong could do that Jerson and Budoy couldn’t. I came to know later that the two have been assisting and guiding tourists for two years now and were personally trained by Jong. We got on the boat, and off we went to our first destination-Kayangan Lake. Jerson and Budoy told us we’re going to have lunch there. Great! It was 12 noon by that time, and I was already starving!

It was a short 15 to 20-minute boat ride from the pier. We decided to go swimming inside the lake first with Jerson as our guide while Budoy would be setting up our lunch on one of the tables under a nipa-hut dining area located near the entrance of the lagoon. To get inside, we had to carefully climb up and down through the 700 make-shift stairs built in-between steep and sharp limestones. As we walked down the stairs moving closer, we could already see a promising view of the lake. Soon, we found ourselves taking great pleasure in admiring the magnificent view of Kayangan lake. Infront of us was a stunningly clear body of water enclosed in towering limestone cliffs. The Kayangan lake is considered as the cleanest of its kind in the Philippines and also dubbed as the cleanest in Asia. It is said to be a freshwater lake, but I tasted a slight saltiness in it while I was swimming. I believed the water was brackish, a combination of salt and fresh water. I saw a school of fish near the wooden platform built on the edges of the cliffs but I thought there wasn’t enough fishes in the area to make this a great snorkeling spot. The water is great for swimming and diving though, especially for those who prefer swimming in deep waters. We had so much fun plunging into the lake and swimming deep underwater stopping only when our stomachs started to grumble. It was time for lunch. We went up taking the stairs once more stopping at the top for a while to take our own ” I was here” photos. We descended after a few minutes and found Budoy waiting for us under the nipa hut dining area. It was seafood galore for lunch! On the table were grilled fish, buttered shrimp, steamed crabs, and seafood salad. There was more than enough food for us. I remember Jong saying earlier ” Pasensya na po sir, nasobrahan ko yung food nyo, akala ko kasi malalaki kayong tao” ( I’m sorry sir, I prepared more than enough, I thought you were “big people. “) To which I replied ” Ok lang po, wala sa ‘tsura yan” ( It’s ok, we might not look it, but we eat a lot.) When there is so much food infront of me, I always use the LRMU technique.( less rice, more ulam, hehe) “Ulam” could mean “viand” for lack of an exact one-word translation into English.

After a sumptuous lunch, we paid for our entrance fees ( P200.00 each) and headed to Barracuda Lake with full stomachs. We reached the lake after a few minutes. Near the entrance was a small nipa hut built on stilts on the water just infront of big sharp rocks. I was told it was a make-shift office of DENR ( Department of Energy and Natural Resources) where we we would pay our entrance fees (P100.00 each.) Unlike Kayangan lake, going to Barracuda Lake from the main entrance was so much easier with only 37 steps through a wooden make-shift stairs built in-between the big sharp rocks. The view was equally amazing. Some say it was named as such because there was a skeleton of a big barracuda that was found in this lake. Others say that small barracudas still exist in the lake. Not sure if this was true as I didn’t see one. Not that I wanted to because if I did, I wouldn’t have dared plunging myself into its inviting clear deep blue waters. It is best to take this as a precaution though. The type of water here is similar to that of Kayangan but believed to be deeper at approximately 40 meters. Dubbed as “the craziest dive site in the Philippines,” divers can experience extreme “thermocline” levels at 14 meters up to 40 degrees Celsius and see awesome limestone formations underwater. After an hour of swimming, we decided to move on. I asked Jerson where we’re headed next and he said we’re going to the Twin Lagoons. The lagoons are divided by towering limestone cliffs. The outer lagoon is where the boats normally dock. Getting to the inner lagoon used to be a challenge for some because it can only be accessed by swimming through a small opening at the bottom of the cliff, similar to the entrance of the Secret Beach in El Nido. But now, there are wooden stairs built in-between the jagged limestone cliffs providing an easier access. Inside the blue lagoon, one would surely notice that the water is warmer underneath and colder on the surface. I heard one of the guides explaining to his European guests that this is where the cold spring and warm sea water combines.

Swimming across the lake can be very tiring. I saw a bamboo chair built in-between the sharp stones at the bottom of the cliffs and I would have wanted to take pictures of it, but midway, I got so tired. As I was swimming back, I met a group of local tourists who got curious of what I was using to take pictures. I stopped to chat with them for a while and had them take a closer look at the Dicapac underwater case I recently bought in Hidalgo for my Canon SLR (I will write a review of this in my next post.) My friend Jim who wasn’t far from where we were, found the scene very funny. With only our lifevests on to keep us afloat and while we were all swimming in the middle of the lagoon, I gave a little demonstration on how the underwater case works. I was amused when Jim said ” Parang nagkita-kita lang sa kalye at nagkukwentuhan ah” ( It’s just like meeting and chatting in the middle of the streets.) I didn’t mind a bit though. I always enjoy talking to fellow tourists when I’m traveling. When we reached our boat, and after we paid the entrance fees (P100.00 each,)we told Jerson and Budoy that we’re ready to go. It was almost 5PM, and Jerson said it was time to go to Banana Island where we would spend the night. It would take more than an hour to reach Banana Island from the Twin Lagoons. Although there were three more destinations included in our Coron loop island hopping tour ( Siete Pecados, Banul Beach, and Skeleton Wreck,) we all decided we would just visit them on our way back to Coron town the following day. Besides, it was getting dark and we wouldn’t be able to fully enjoy these spots. We truly enjoyed our first day in Coron. After having so much fun swimming in the lakes and lagoons of Coron, I have totally forgotten how upset I was earlier that day. After all, who would want to focus on the mishaps after a great adventure? 23 thoughts on “From Mishaps to Great Adventures”