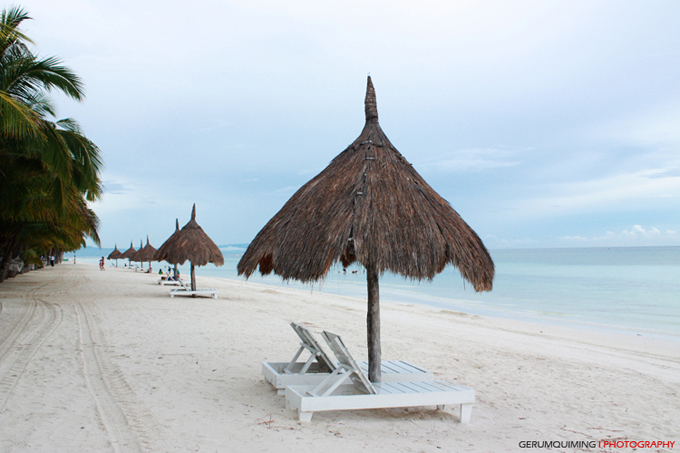 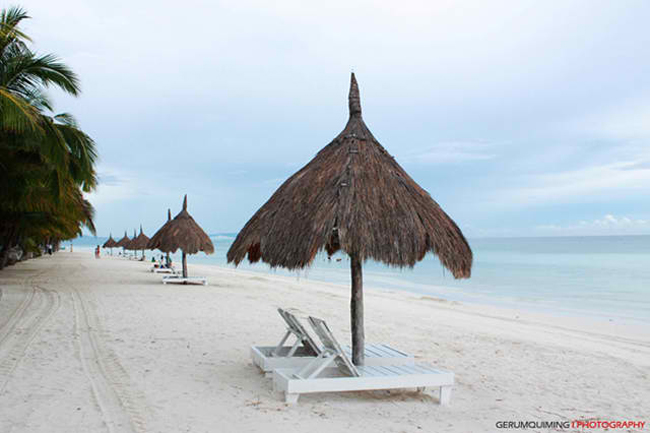 We spent the morning of our 2nd day in Bohol at Panglao Island Nature Resort and Spa (PINRS). After lunch we headed to Hinagdanan Cave which is just about 5-10 minutes away from PINRS. This is a small, single chamber cave that has stalactites, stalagmites and other stone formations typical in limestone caves. Cemented steps lead to the interior of the cave. Inside the cave, there’s also a lagoon that visitors may swim into, however, it has been advised recently to not dip in the lagoon because of the karst pollutants present in the water. Entrance fee to the cave is P15.00.

Then, we made our way to Bohol Bee Farm (BBF) which is known for bee cultivation and organic farming.

This is actually a beach resort and restaurant where organic foods are served. Along the way, our tricycle kept on telling us to try the “malunggay” ice cream, which I found odd. Malunggay is a leafy vegetable normally found in the rural areas of the Philippines, and I got a little curious as to how this ice cream would taste. When we got there, they asked us to register and soon after, we toured the area guided by one of the staff who gave us a brief lecture on plants and of course, bees! We then went to the ice cream parlor to try the malunggay ice cream that our tricycle driver had been raving about. Surprisingly, it tasted good and I did not even taste the malunggay flavor in it.

Tip: Spend some more time at Bohol Bee Farm and try their other organic foods and check out their view deck to enjoy a beautiful scenery. This was one thing I failed to do during our visit. As I write this article and see some photographs online taken by other tourists from BBF’s viewdeck, I wish I had seen these pictures before the trip. Well at least this is something I would look forward to on my next visit to Bohol. I’ve also read a lot of good reviews about the resort from tourists who decided to avail of their overnight accommodation.

We proceeded to Dumaluan Beach 2 afterwards to meet our friends. Unfortunately, their standard rooms which cost P1,600 a night were all fully booked, and we would go over the budget if we decided to take their only available room that would cost P2,500. We tried to look for a cheaper accommodation in the area and we found one at Whites and Greens Resort for P1,600.00/night which is about 10 to 15 minute-walk away from Dimaluan Beach 2. We thought it was quite far so we opted for an air-conditioned room at Dumaluan Beach 1 for 2,000/night. It turned out that our friends were not booked at Dumaluan 2 but were actually staying at Dimaluan 1 and their room was just beside ours so we were happy when we found that out. It was about 3PM when we were finally settled. 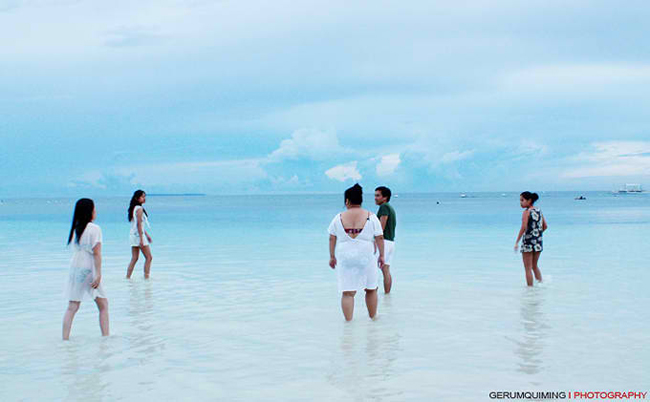 We would have wanted to avail of Bohol Beach Club’s (BBC-located just beside Dumaluan Beach 1) day tour for P350.00 ( P200 of which is consumable) but we decided not to push through with the plan because it was too late. We walked to the beach fronting BBC though to take some pictures. 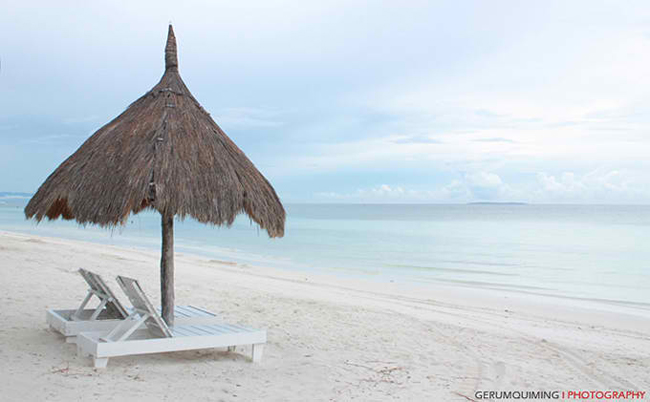 I wasn’t really impressed with the beach at Panglao Island, not even the beach at BBC. Yes, the sand was white and powdery, and the water was clean and clear, but one needed to walk for a few meters from the shore before he/she could finally swim. It was low tide all day long. This is a great beach and best recommended for children though. 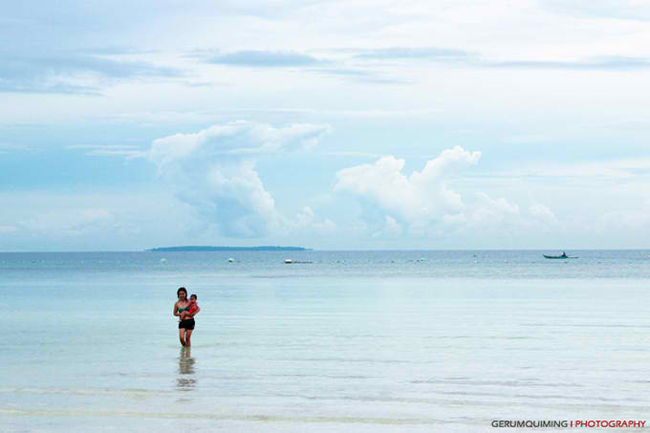 We dined in at Dimaluan 1 that night. Food cost around P250-P300 for a regular meal, and for the price, it tasted ordinary.

We woke up early on our next day for island hopping tour. 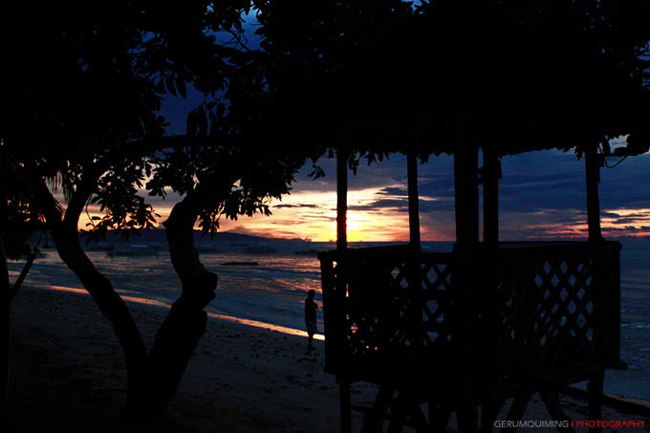 We immediately looked for a place to eat breakfast or at least to have coffee before the tour but unfortunately, there was none. The staff told us that Dumaluan 1′ s small store would open at 7:30AM which was too late since we were scheduled for island hopping at 6:00AM. Yes, they don’t have a restaurant. The place where we dined in the previous night was just a small stall, like a kiosk, where one gets to order. Food would be served on the tables that were set up infront of the kiosk. There is a restaurant at Dumaluan Beach 2 though which is 3-5 minutes away, but it was also closed at that time in the morning.

So we went island hopping with empty stomachs early that morning. An hour away from the beach, our boatman-guide took us to where we could see dolphins. He told us that if we get lucky, dolphins may come near our boat and we might have a close encounter with them. We saw a lot of dolphins that morning but they were quite far away. 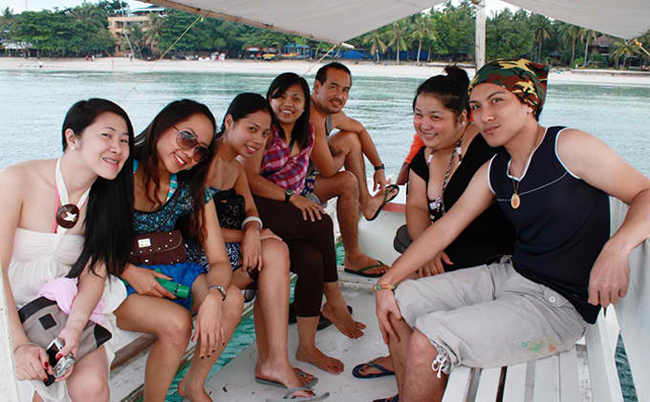 Not far from the dolphin watching area is Balicasag island. The beach in the island is rocky and swimming barefoot is not advisable as there is a great chance one would step on a sea urchin. 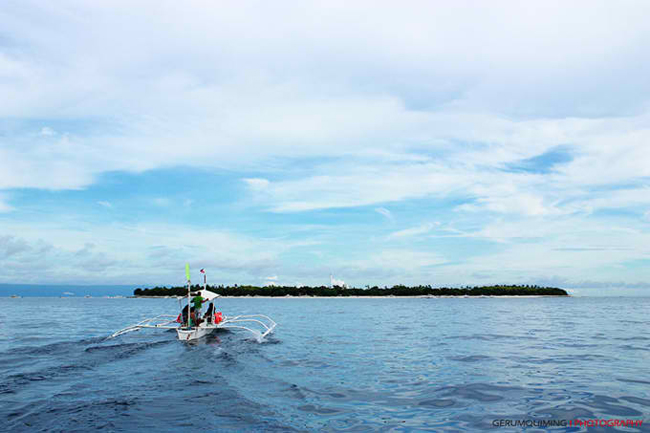 There were stores in the island where tourists could buy snacks and food. Just be prepared for the price of the items being sold there. One pack of cooked Lucky Me Pancit Canton costs P50.00 ( P6.00 in Manila. ) Sparkle softdrinks is priced at P25.00 ( P7.00 in Manila) Since we were hungry, we had no choice but to order despite of the high price. I ordered Supreme cup noodles for P60.00 ( around P25 in Manila) and had that as breakfast together with ripe mangoes that we bought from the city the previous day. Luckily, I brought a bottle of drinking water with me. 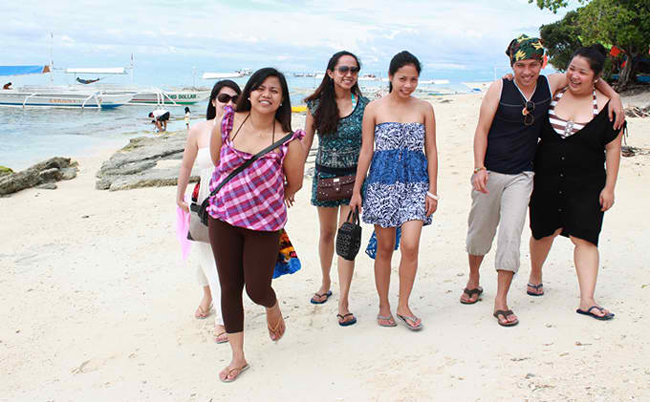 We did not snorkel which was a big disappointment. Most members of the group did not know how to swim and were afraid to get in the water even with their lifevests on. Some were simply not interested. So after taking a few group pictures in the island, we asked our boatman-guide to take us to the deeper part of the beach so I and whoever wanted to join me could at least swim and dive into the water before we get back to Dimaluan beach. We were also supposed to go to Virgin island but we chose not to after we were told by the boatman that the island is an hour away from Balicasag. Personally I thought we did not get the most out of the island hopping tour. Good thing it was free for me and my good friend Jim since we only joined our friends’ island hopping tour which was a part of their Bohol package tour. We were ready to pay our share but the tour organizer did not charge us for joining the group.

We were back at the resort at 11:00AM, had a quick lunch, then immediately prepared for the afternoon city tour. Since our friends were scheduled to go to places we’d been on our first day, we asked them if we could at least ride with them until we reach a place where we could get transportation back to the city. There was no public transportation from the resort to the city, at least none that I know of.

Their first stop was Nova Shell Museum which is just a few minutes away from the resort. Owned by Mr Quirino Hora, a certified diver and a recognized shell collector, the museum consists of thousands of different types of shells, a result of of Mr. Hora’s and his wife’s over 40 years of collecting shells. Mr. Hora was kind enough to share his collection to the public, and during our visit, he personally assisted us and gave us a bit of information about his collection. According to Mr. Hora, some of the shells that were on display were rare and cost thousands of pesos. Some of the expensive shellls he showed us looked ordinary to me I couldn’t actually tell the difference with the shells I had seen in beaches before. There was also an area where products made out of seashells were displayed for sale. 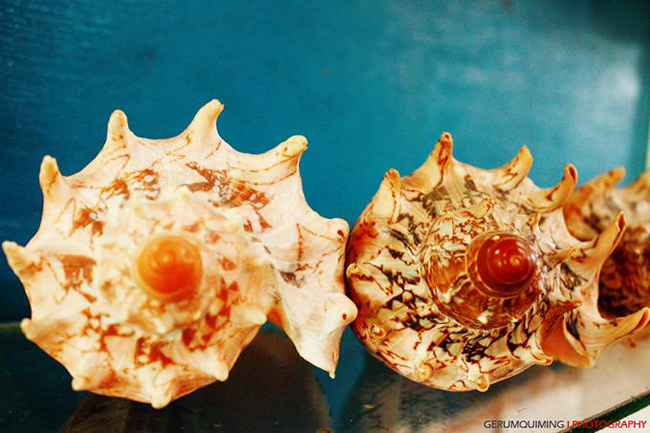 The group’s next stop was Bohol Bee Farm. Since we went there the day before, we told the van driver who was also the group’s tour guide to just drop us to where we could find a ride back to the city. After a few minutes, he stopped at an intersection and showed us exactly where to wait for jeeps bound to Tagbilaran.

We were back at the city by 3PM. We again checked in at Eastcoast’sTourists Inn. Later that afternoon, we decided to have another walk around the city, just to explore and learn more about the people, cuture and life in Tagbilaran.

8 thoughts on “Rambling Around Panglao Island”

A Taste of Bohol’s Chocolate Hills