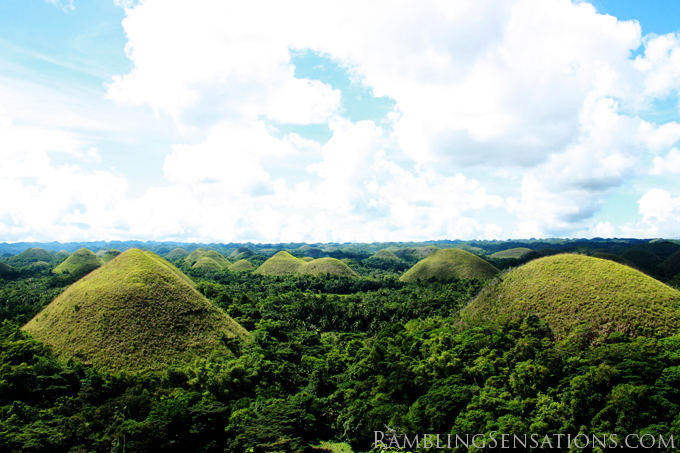 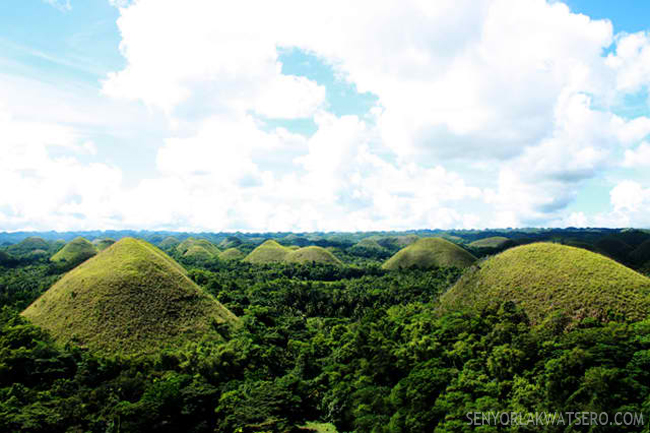 What’s a trip to Bohol without visiting the Chocolate Hills? After all, long before the beautiful white beaches of Panglao and Alona became major tourist destinations, these cone-shaped almost symmetrical hills put this island province of the Philippines in the world tourist map.

Much speculations have been made on how they were formed or created . One legend says that the hills are a result of a feud between two giants who hurled rocks and boulders at each other. Another legend tells the story of a young and powerful giant named Arogo who fell in love with Aloya who was a mortal. When Aloya died, Arogo wept for a long time and when his tears dried, the hills were formed. In the real world though, it was initially thought to be man-made, but that idea was quickly discarded. Scientists believe that they may be weather formations that sit on top of limestone and clay, but this theory has not been confirmed yet. It is just so mystical and amazing to me that up until now, after a series of studies made by expert geologists and scientists from all over the world, the existense of the Chocolate Hills still remains a mystery to all of us. 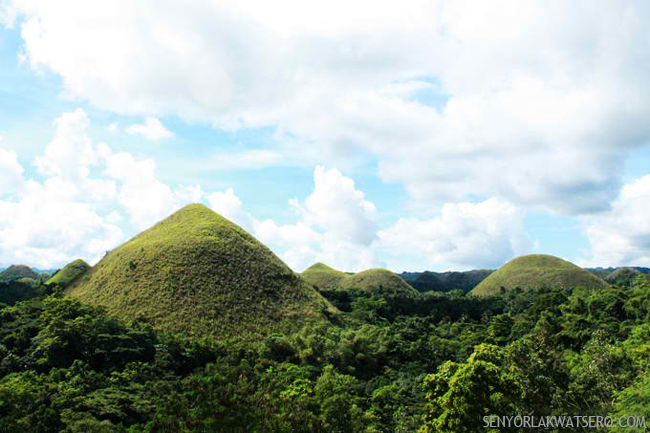 Most recommend to visit Chocolate Hills towards the end of the summer, when all of the grass covering the hills dry up and turn from color green to brown, making the approximately 1776 hills (based on the latest survey) with heights ranging from 30 to 50 meters, appear like giant Hershey’s chocolate kisses spread in an area over 20 square miles and are scattered all over the municipalities of Carmen, Sagbayan and Batuan . This amazing spectacle is where the hills earned their name. 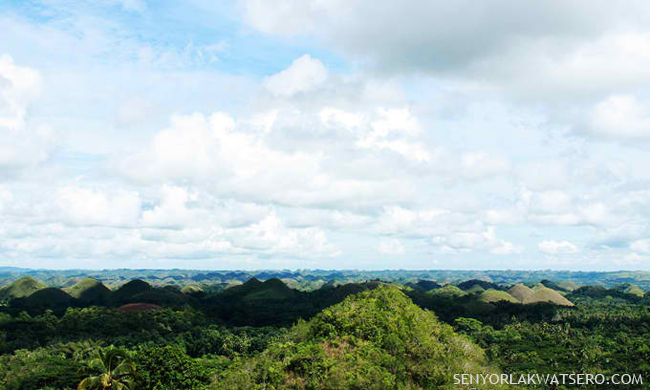 In the morning of our last day in Bohol, we hired a tricycle to take us to Dao terminal where we could find buses bound to Carmen. During a brief converstaion with our friendly tricycle driver, he told us that there are also passenger vans in the terminal that may take us to Chocolate Hills. Taking the van is definitely a better option. The bus would surely make several stops along the way to pick up passengers and it would take longer to get to our destination. Chocolate Hills can be reached from Tagbilaran City in approximately 2 hours. We made sure the van driver understood that we were going to Chocolate Hills and asked him to drop us off at the Chocolate Hills complex, about 4 kilometers before the town of Carmen. After getting off the van, some motorcycle drivers offered to take us up to the complex but we politely declined. We wanted to walk. The winding road up to the complex is in very good condition and there are trees on both sides of the road providing us shade from the morning sun. The 10-minute walk could be tiring but it was definitely very relaxing and is a good form of exercise. Midway, we could already see some of the hills on the left side of the road which made us stop several times to take pictures.

Once we reached the site, we took a rest for a few minutes. We were about to climb a stairway consisting of 214 steps leading to the observation deck. The stairs could be intimidating to some but it’s definitely worth the climb. 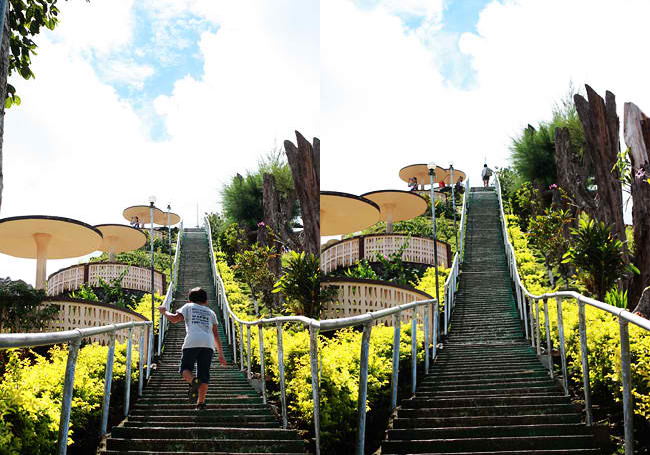 The view from up there was simply spectacular and it extends several miles away! There are just so many of them and they really looked similar to one another. Although they weren’t colored brown when we visited, I still thought it was a magnificent site and it made me more curious as to how they were really created. It was truly one of nature’s wonders. 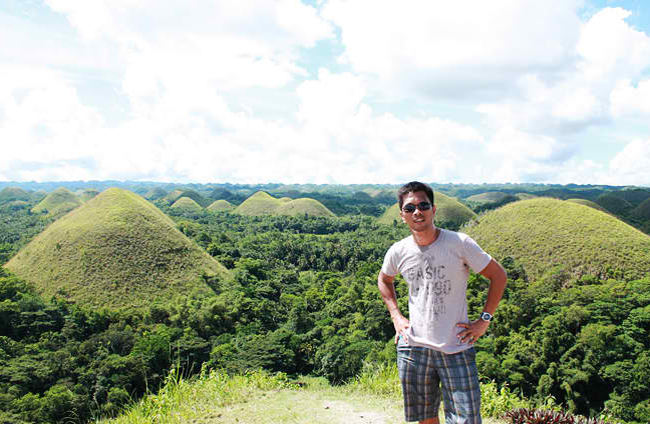 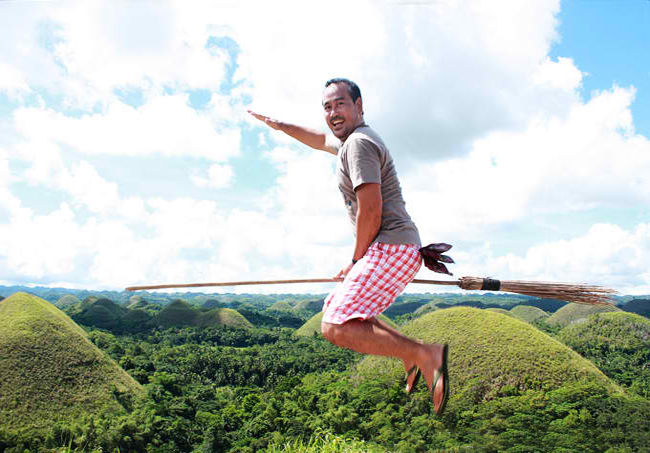 Going down from the view deck, we decided not to use the stairway but to take the pathway on the other side instead, said to be designed for the handicapped tourists. A few minutes later, we ran into friends while checking out some of the souvenir shops within the area. Since they were in an organized tour, we asked if we could ride with them down to the main road where we would wait for the bus bound to Tagbilaran. Luckily, there was enough room left for the two of us.

As we were leaving the site, I was reminded of the time back in 5th grade when my teacher introduced the Chocolate Hills along with the other Philippine natural attractions to us as part of our Social Studies lessons. I surely never missed it whenever it came out in our quizzes and examinations. And now that I have actually seen it, it just gave me a feeling of pride and fulfillment. I guess my friends described the experience perfectly when they simply said, ” It was sooo cool! And dit it taste sweet? Oh, yeah! 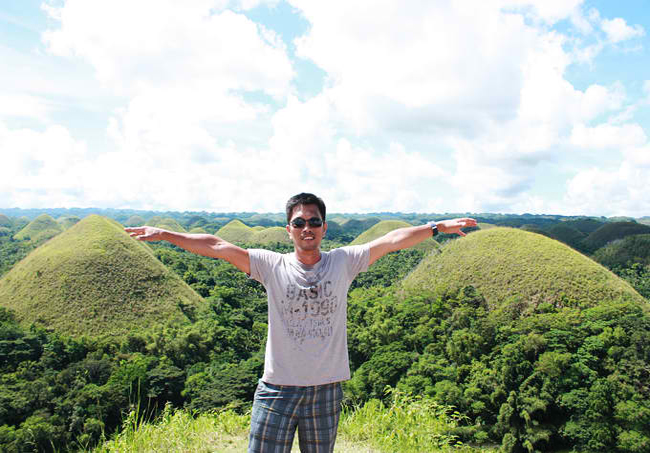 4 thoughts on “A Taste of Bohol’s Chocolate Hills”