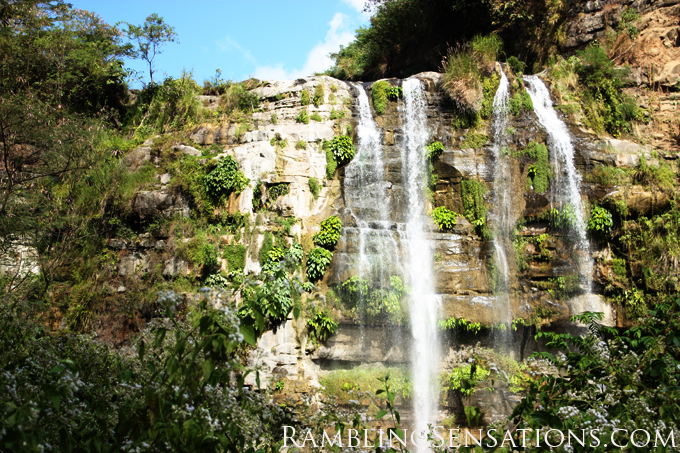 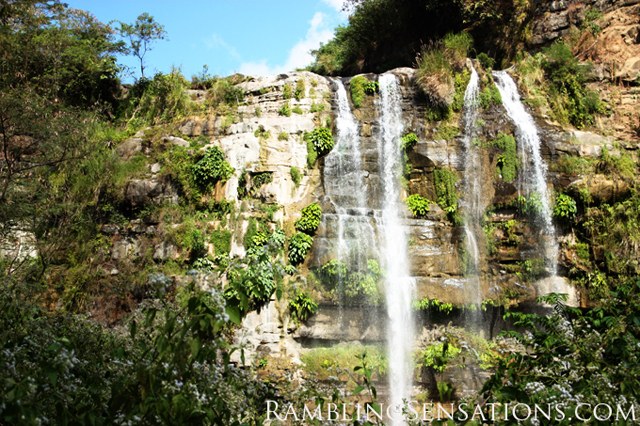 It was the first day of the year 2011 and I realized I would be going back to Manila in a couple of days without even visiting at least one of the popular tourist destinations in the Ilocos Region. Time seems to fly too fast whenever I go home for the holidays. My short vacation is normally spent in the house cleaning and fixing things, or going to town to buy food and other stuff needed for new year’s eve celebration, not to mention the time I spend catching up with childhood friends who like me are also home for the holiday season. Luckily when I asked my younger brother if he knew of a nearby place we could visit which does not require more than one hour of travel, he suggested we go to Suyo. This is an interior town located in the southernmost part of the Province of Ilocos Sur.

I’ve never bothered to find out what’s in Suyo when I was younger. I’ve had a few friends in high school who were from Suyo but I was never really interested in knowing what’s in their town. All I knew was that my high school classmates had a difficulty going to, and back from, school everyday due to its poor road conditions. But that was years ago of course, and I was really glad when my brother assured me that going there now is so much easier due to the newly constructed Suyo-Cervantes road that commences from Bitalag, Tagudin Ilocos Sur. This was great news since I wanted to drive and I thought it would be more convenient for us to go there via a private vehicle.

We reached Suyo in approximately 45 minutes from our place in Sta. Cruz, Ilocos Sur. Since my sister wanted to visit her high school friend, who is a resident of Suyo, we went to see him first. We were delighted when we saw a hanging bridge just a few meters away from my sister’s classmate’s house. This hanging bridge connects other barangays of Suyo which are separated by the river, to the municipality. 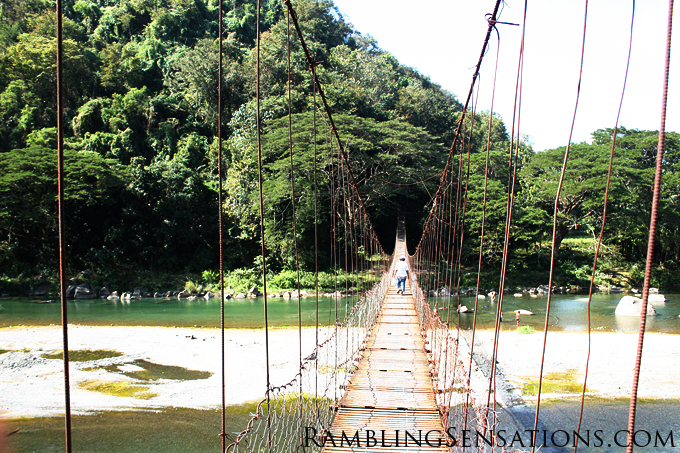 We then made our way to see one of the falls of Suyo. We stopped near a small bridge, which is located just before one reaches the main town of Suyo, and parked the car on one side of the road. From the main road, we walked along a rugged dusty trail for approximately 15 minutes passing by another small hanging bridge before we reached the waterfall they call Darawa. (or is it Dawara Falls?) 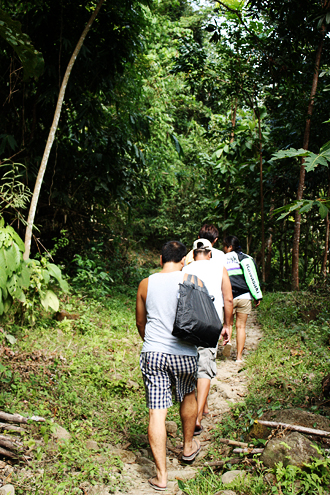 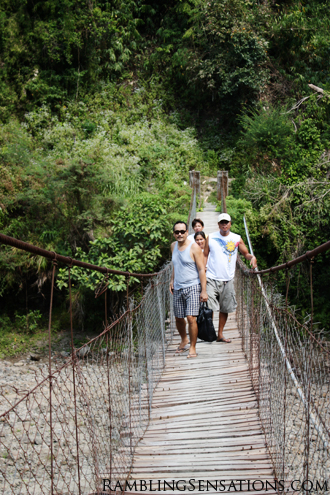 As soon as I had my first glimpse of the waterfalls, I got really excited! I never expected it to be that awesome! Darawa waterfalls stands approximately 40 feet tall amidst the pristine hills and mountains and green surroundings of Suyo. 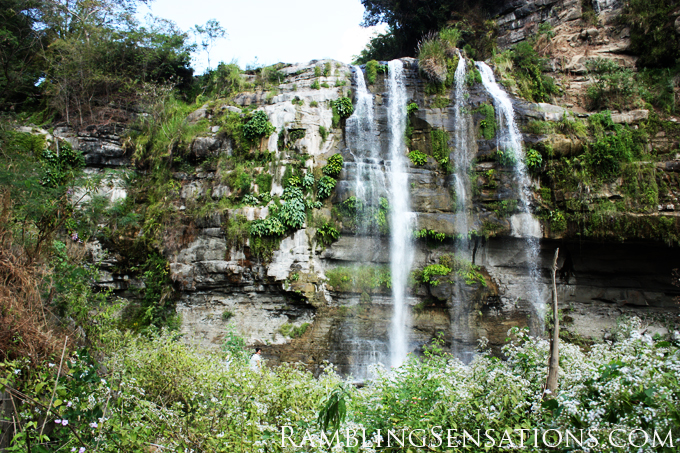 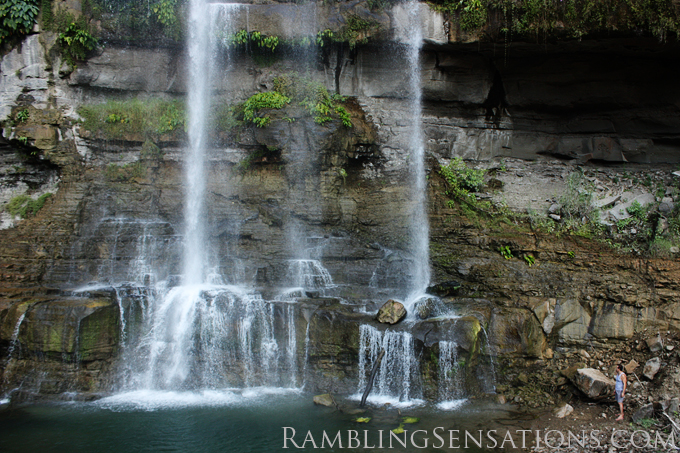 The water splashes down the rocks creating beautiful cascades below before it finally reaches the pool at the bottom. According to our guide, this scenic view is a favorite spot of the residents of Suyo for a weekend picnic enjoying the bounty of fish caught from the stream. 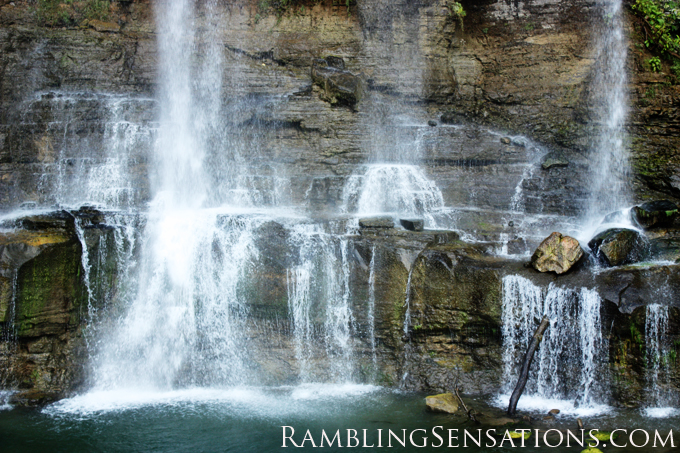 Our guide also mentioned that although the water flows through the waterfall all year round, Darawa falls is at its most beautiful form during the months of July and September. 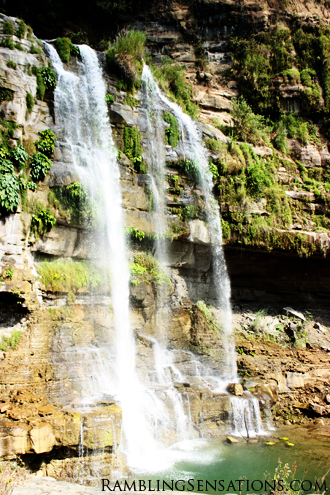 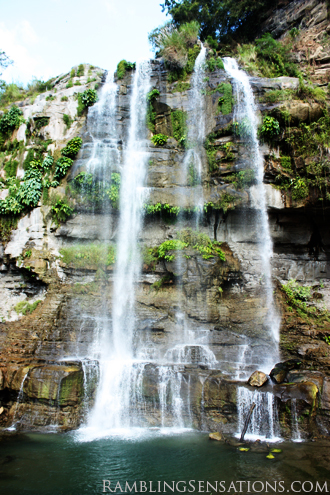 We were tempted to take a dip and swim in the pool at the bottom, but there was one more waterfall we had to see so after enjoying the view for a while and taking a few pictures, we made our way to the second waterfalls.

We went back all the way to the main road, walked to the other side of the the small bridge, then trekked along a narrow rugged path crossing the river twice. A few meters before we reached the waterfall, we found ourselves ascending on an easy and gentle upward slope, stepping on a solid naturally-cemented sedimentary rock in a dry river bed. It was a beautiful walk in an amazing landscape! 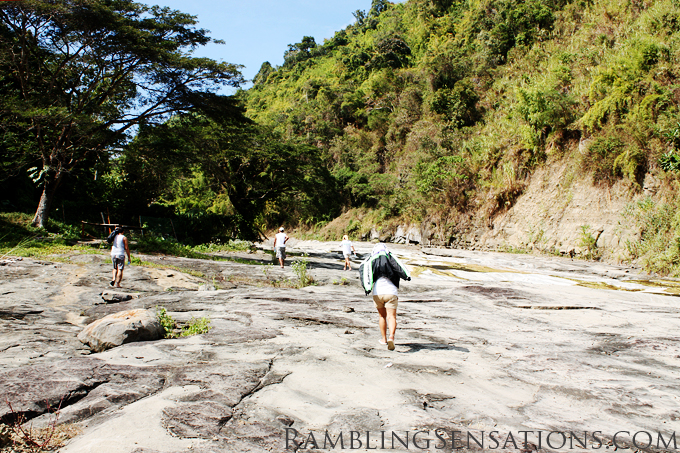 We were soon greeted with a refreshing view of Sangbay ni Ragsak Waterfalls ( Falls of Happines) A very interesting name, and I regret that I forgot to ask why they called it as such. But I remember though that we all felt so happy upong seeing this approximately 20-foot waterfalls flowing beautifully over the cliff all the way down to the natural pool below. 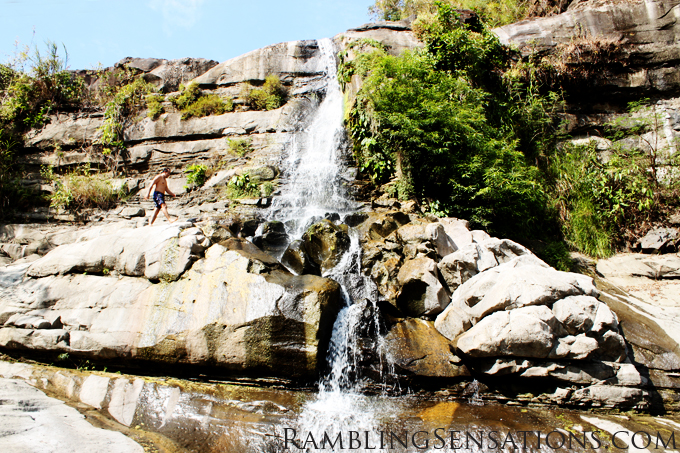 After a few minutes of rest, we began diving into the pool and were immediately revitalized by the coolness of the water. 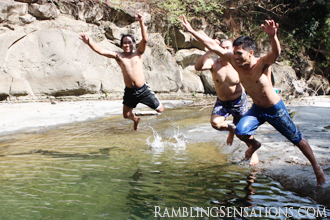 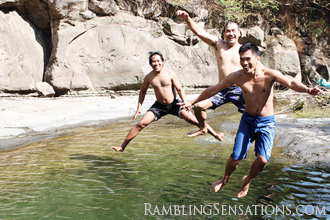 We also climbed the rocks to get to the center of the falls and took turns taking an invigorating waterfall shower under the cascading waters. 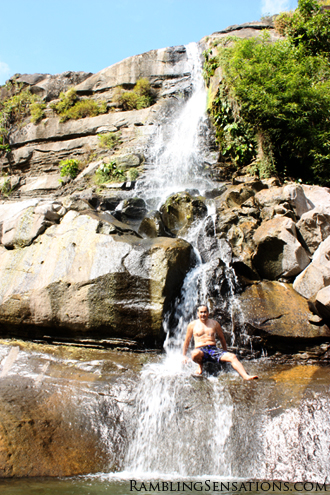 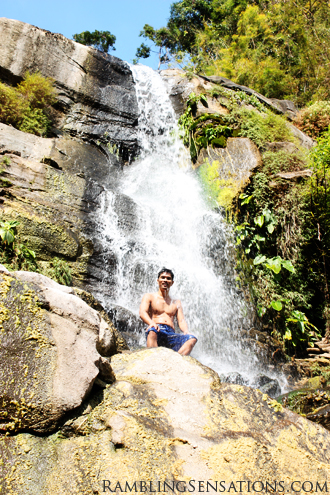 We left Sangbay Falls after more than an hour and decided we would have a picnic lunch by the Chico River. I was really surprised to find out that this is actually a part of the Chico River I used to enjoy in Bontoc, Mt. Province when I lived and worked there for two years. 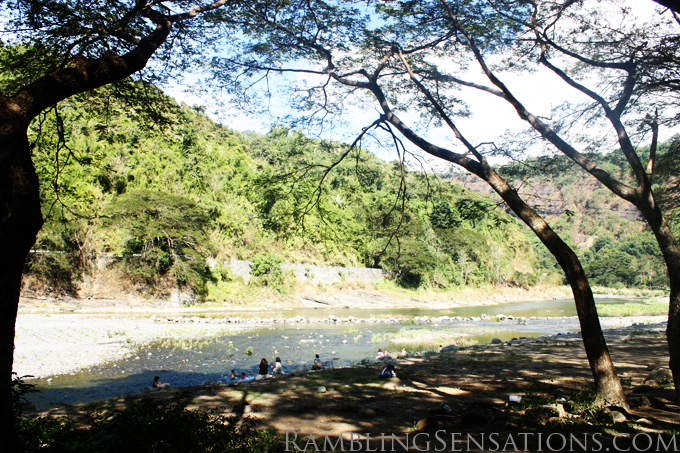 The picnic area was a great spot with plenty of tall old trees that provide picnickers a good shade from the scorching heat of the sun. 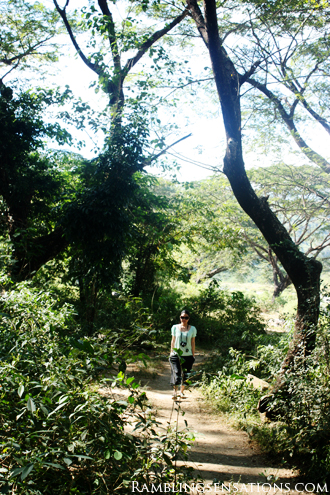 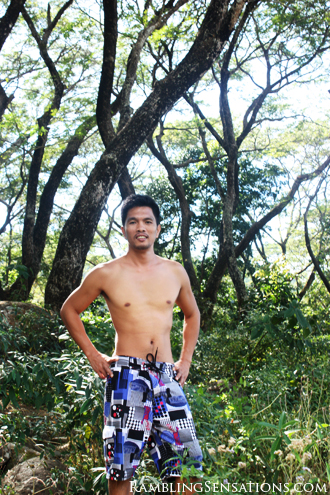 The river was twice awarded the cleanest inland body of water in Region 1 and gained national recognition for the same category. After lunch, we enjoyed swimming in the river until it was time for us to go home. There are other great spots we haven’t seen yet, but unfortunately we needed to leave early as there are other important things we needed to accomplish that day. 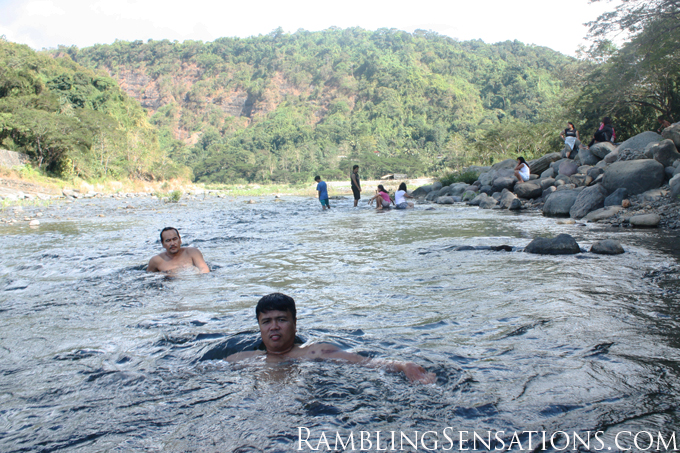 We had an absolutely wonderful time in Suyo. If I had only known earlier that Suyo has a lot of great natural attractions to offer, I would have visited this town years ago. Along with its hanging bridges and pristine waterfalls, and the scenic mountainscapes and clean rivers, the rustic appeal of this town would surely charm every visitor and could later make the municipality of Suyo a popular tourist destination in the southernmost part of Ilocos Sur Province. 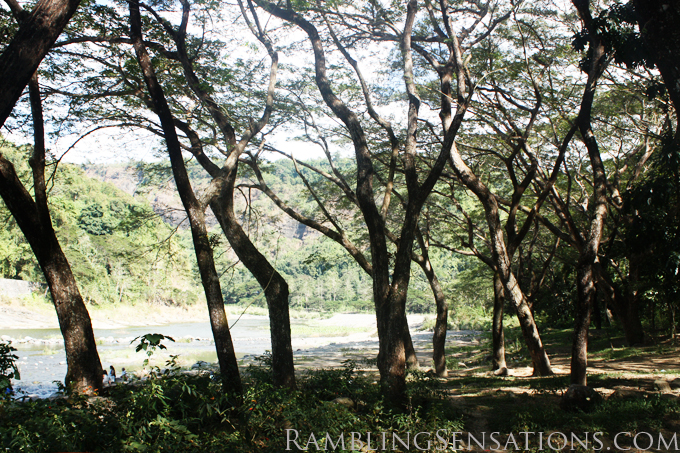 16 thoughts on “The Rustic Appeal of Suyo, Ilocos Sur”

The Firedancers of Puerto Galera

From Mishaps to Great Adventures