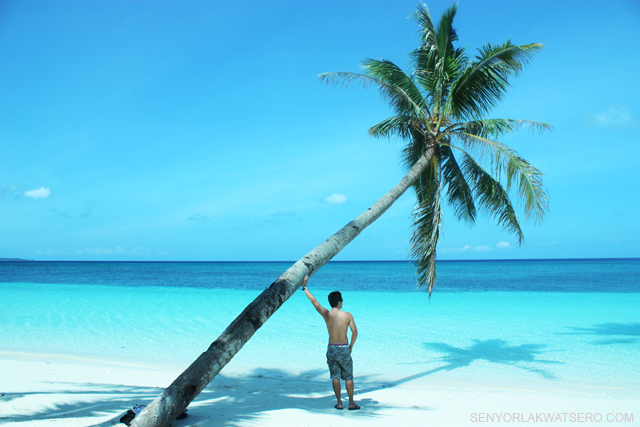 Carabao island, also known as Hambil island , is actually the entire island-municipality of San Jose, Romblon. There are two main beaches in the island. Lanas beach which is situated on the western side has coarse and brown sand. The images of a beach with soft powdery white sand that are posted in the internet, and are often referred to as the Carabao island beach, are actually pictures of the beach in Sitio Inobahan, which is located on the eastern side of the island. 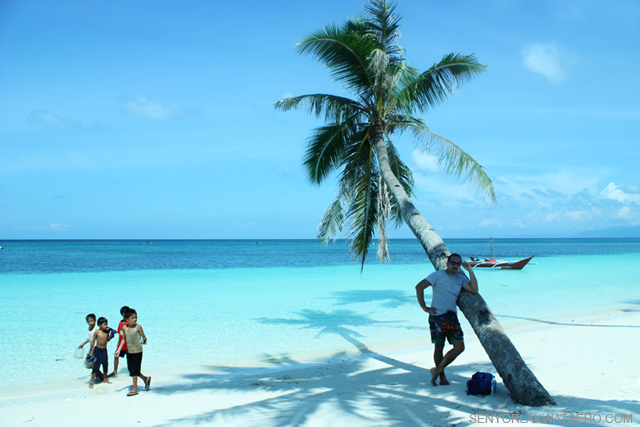 I was instantly captivated by the beach the first time I saw its pictures in the internet. It was described by many, just like any other white beaches in the Philippines, as the next Boracay, the premiere beach destination in the Philippines. My interest was fired up even more by some people saying “it looks like Boracay from many years back, pristine and untouched.” If this was an exaggeration, I didn’t know. But for someone like me who prefers to go to a beach which is still untouched by any forms of development, that description would only mean one thing…..paradise. Since then, I had been hoping that one day, I could visit the island and see its beauty through my own eyes. 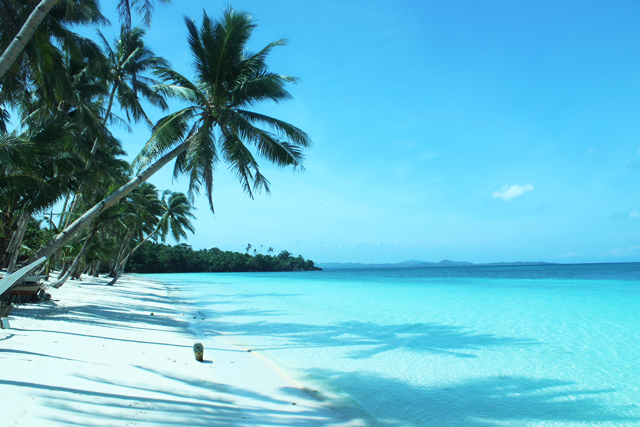 As I mentioned in my previous post, prior to my most recent, I had been to Boracay twice in the past. And since I wanted to explore as many travel destinations as I could, I would prefer to go to places I have never been before. I would not have booked a flight to Caticlan if I didn’t know that Carabao island is just approximately 30-45 minutes away from the famous Boracay beach. Flying to Caticlan would not only give me the chance to enjoy Boracay’s White Beach and its many attractions one more time, but it is also a great opportunity for me to finally explore and experience Carabao island myself. 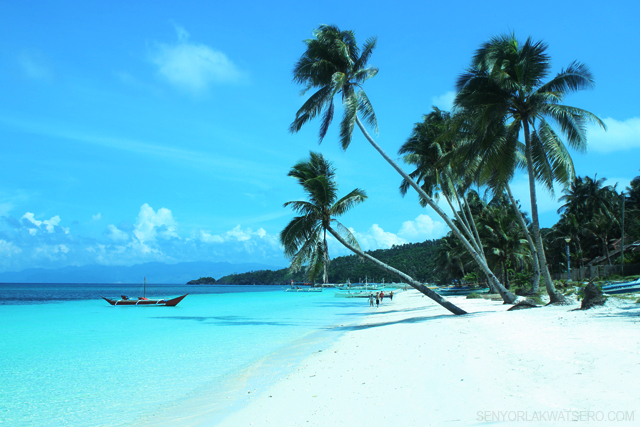 How to get there. We went to Carabao Island on our third day in Boracay. I know that there are regular boat trips going to San Jose, Romblon from Caticlan port, but I’ve also read that there are boats from Boracay going directly to Carabao island. But prior to the trip, I didn’t know where to look for them. I had no idea whether we could find the boats in Station 1, 2 or 3. Since we were constantly being bugged by some agents offering watersports activities, I took the opportunity to ask them where we could find a boat that would take us to Carabao Island. As expected, they told us we could rent a boat to take us there, or go back to Caticlan and get on a regular boat trip to San Jose port. But when I told them I’ve heard of some boats that some residents of San Jose who work in Boracay would usually ride daily to commute to Boracay and then back, one of them told us we could go to Bulabog beach and ask. (We learned later that depending on the season, the boats may be found in station 3 or 1) 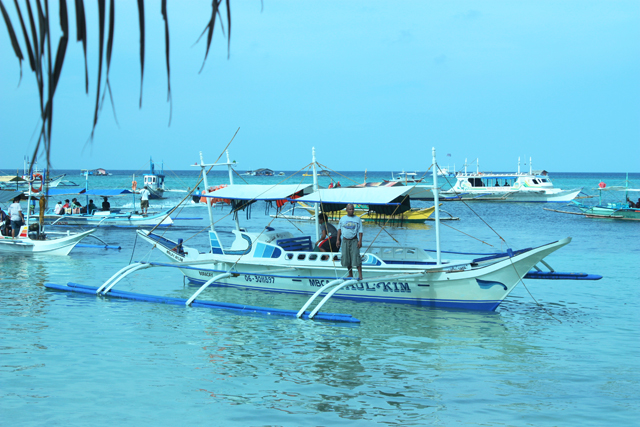 From the main road, we rode a tricycle to Bulabog beach. We were immediately approached by another agent asking us if we wanted to avail of their watersports activities. When I told him, we were looking for the boats bound to San Jose, he accompanied us to where several boats were docked and introduced us to Mang Sherwin, a boatman who lives in Carabao island (Contact Mang Sherwin- 09129044342). The boatman said he would go back to San Jose at 4PM and that we could ride in his boat. We learned later that his boat is also being used for island hopping and other watersports activities. We noticed some people, which we thought were locals, getting on a smaller boat and when we asked where they’re headed, we were told they’re going back to San Jose. Although, they were leaving earlier, the boat was quite small so we decided to wait for Mang Sherwin’s boat, which is bigger. The ride from Bulabog beach to San Jose port took only more or less 30 minutes. 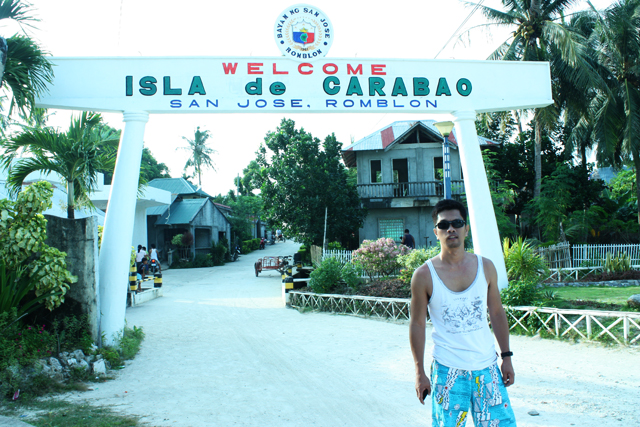 The sea was calm that day. We had a smooth ride all the way to Carabao island. Mang Sherwin charged us P100 each. We did not notice the rest of the passengers pay for the ride so I guess it might be a free ride for the residents of the island.

The beach. The sand was as white and soft and as powdery as that of Boracay’s. As soon as I had my first glimpse of the island, I instantly felt the urge to jump off the boat and swim to the shore. Its water is very calm and crystal clear. I actually enjoyed swimming here more than I did in Boracay. 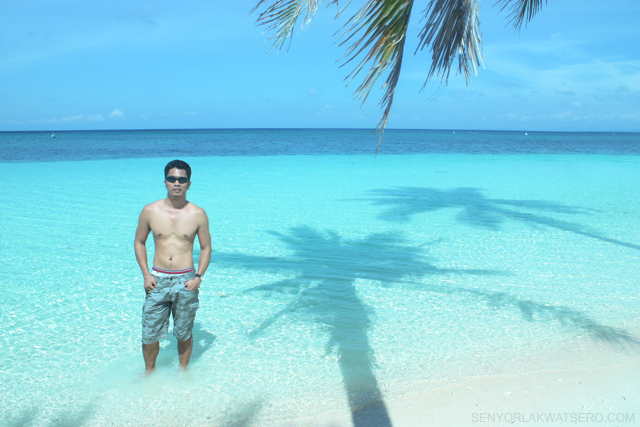 The beach is smaller in length though. It is approximately one third of Boracay’s White beach and its shore is about 10-15 meters wide. The road is right beside the beach and across are the residential houses. I really liked it that the houses, except for one bungalow, were built across the road, and not on the beach. Otherwise, the view would have been destroyed and the whole beach area would have looked congested. 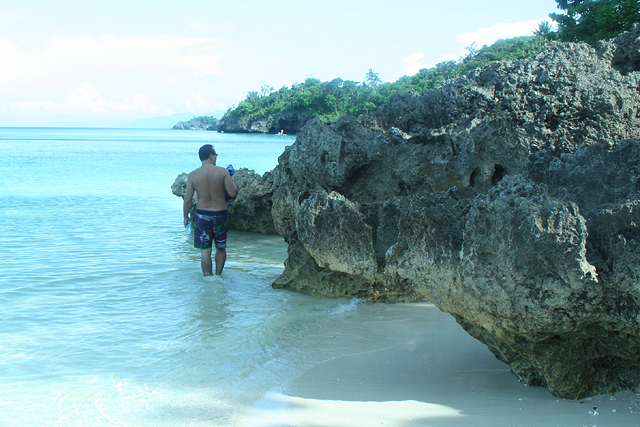 I hope the local government would really be careful in constructing infrustructures and allowing people to build establishments near the beach. Personally, I think that the port that was constructed at the middle and which divided the beach into two, had diminished the beauty of the place. 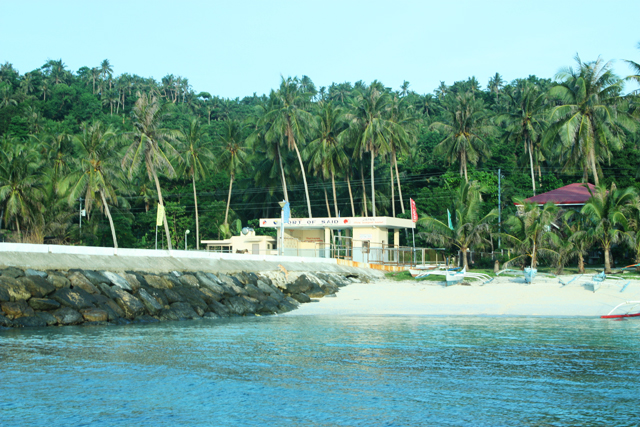 In it’s current state, however, the beach is still lovely and has remained unexploited. It still looks and feels like a remote and quiet fishing village. Although, there have been plans of tourism development in the area, it is still devoid of the common tourist attractions that one may find in the more developed beaches like Boracay.

We stayed in the island for two nights and two days and mostly spent our time swimming, exploring the beach and its town and being friends with the locals. 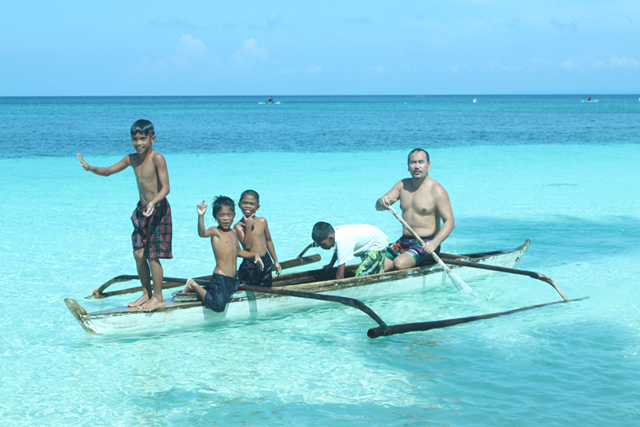 There wasn’t much to do here. We were the only visitors during that time. At some point in the afternoon, we found ourselves at the port along with some of the island’s residents waiting for boats from Boracay to arrive. We were hoping that other tourists would also find their way to Carabao Island. But nobody else came to visit when we were there. 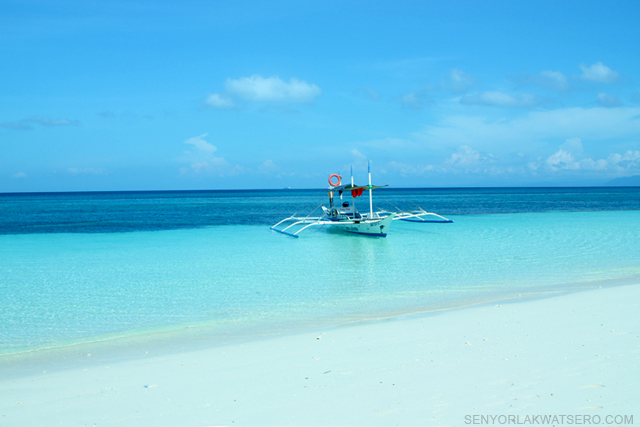 Where to eat. Finding a place to eat could really be difficult so it is best for anyone who is going to the island to bring enough supply of food. During our visit, we did not find any restaurant in town. We were hoping we could buy seafood in the market, but to my surprise, there was not a single fish that was being sold when we went there. We opted to buy canned goods and rice from a grocery store instead, which the caretaker of the guesthouse we stayed in gladly cooked for us.

Accomodation. Prior to the trip, I only knew of one place to stay in the eastern part of the island- the mayor’s house (Contact Edison- 09183303718). It is a bungalow located right infront of the beach. Their air-conditioned rooms would cost P1,300 and fan room is priced at P750.00. The rooms are of course very clean and well-furnished. Two of the rooms are located inside, which are accessible through the main door, while the other room is located on the right side of the house, and can be accessed without having to go through the main entrance – perfect for those who may want more privacy. 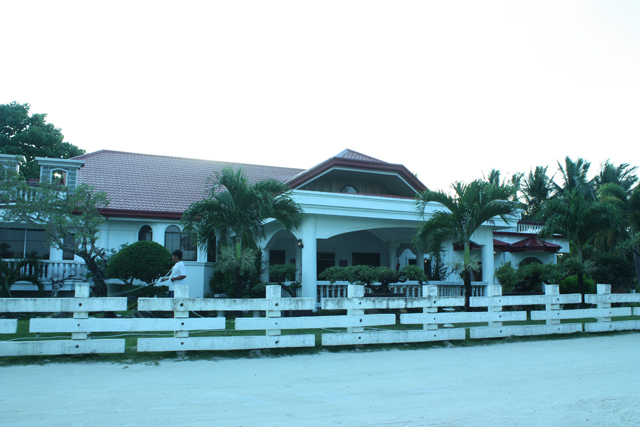 There are resorts in San Jose but these are located in Lanas beach, on the western side, which is 30-minute habal-habal ride away from the more beautiful beach on the eastern side, at Sitio Inobahan. I wanted to know if there are other available guesthouses in Inobahan aside from the mayor’s house where we could stay for the night, and when I asked Mang Sherwin , he led us to Roque’s Place, a two-story house located approximately 5 minutes away from the beach (Contact ALing Lily- 09079157580) 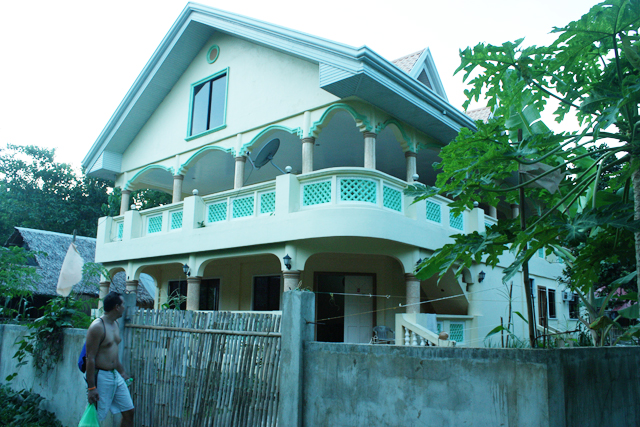 Their air-conditioned rooms cost P1,000 a night. The rooms were clean and each has its own bathroom. The amenities were very basic though. The one that was given to us has a king-sized bed, very spacious but it doesn’t have a cabinet and TV. Should anyone need it, guests are allowed to use the only refrigerator in the house. What I really like best about our stay at Roque’s place was how we were treated by Aling Lily, the caretaker, and her daughter, as guests, in the real sense of the word. They were very nice to us and gladly attended to all our needs.

Camping is also allowed on the beach, and it may also be important to know that electricity in the island is not available from 11PM-10AM.

We left Carabao island early in the morning on our third day riding on the same boat that took us there from Boracay. I was so glad that I have finally visited and seen the beach up close. 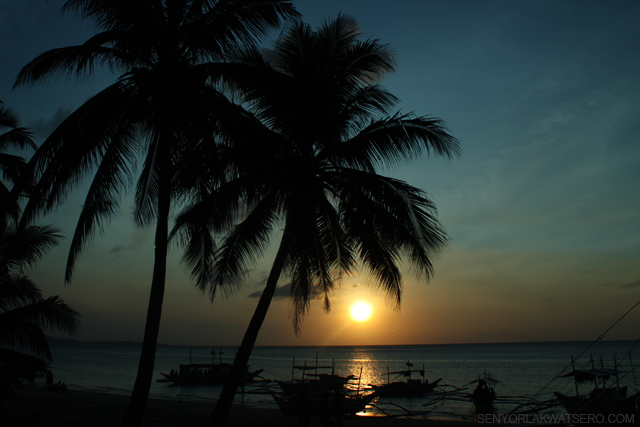 As to the idea of Carabao Island being the next Boracay, I have some doubts. It’s too small in comparison to the most popular beach in the Philippines. As a matter of fact, I have yet to see a beach as long and as wide and with white sand as soft and as powdery as that of Boracay’s. 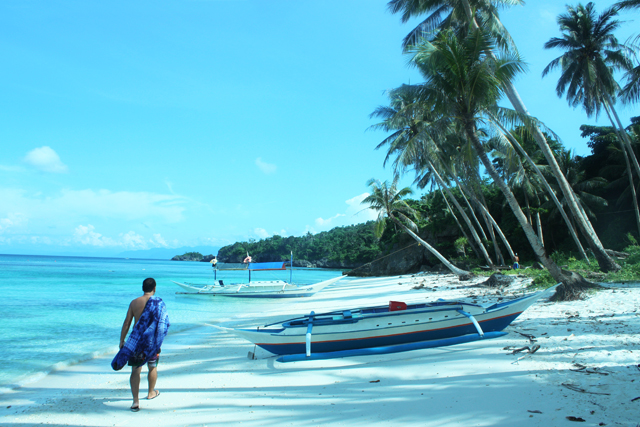 If tourism development in Carabao island would really push through, however, I could imagine it to be like Puerto Galera’s White beach in the future, perhaps even better, if careful planning is observed. But for someone like me who prefers the unexploted beaches, I love it the way it is now. 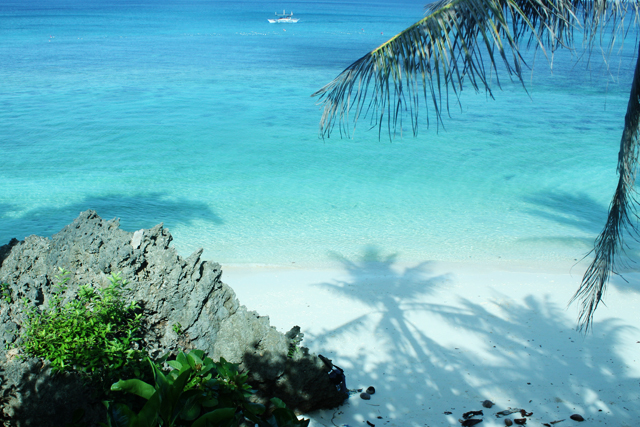 I do remember and understand my conversations with the local residents, however,(during a 7-hour drinking session with them. Good eagle beer ba? Tagay pa!)and their long overdue hopes for progress. I just wished that along with the future plans of tourism developments, the people and the local government will work together in ensuring that the beauty and charm of Carabao island will always be preserved for many more years to come. 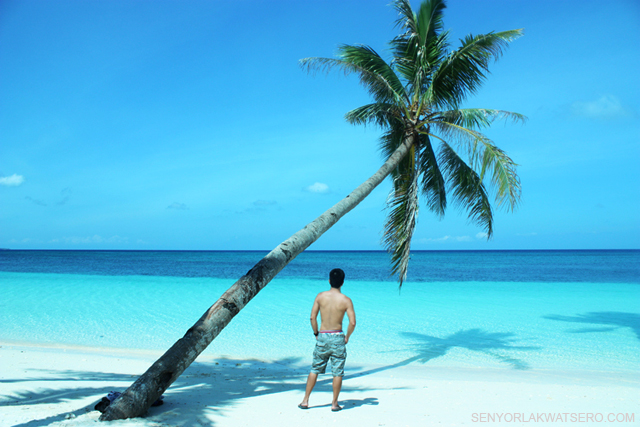 37 thoughts on “The Pride of Romblon: Carabao Island, Up close”

Boracay: Still The Ultimate Beach Destination in The Philippines