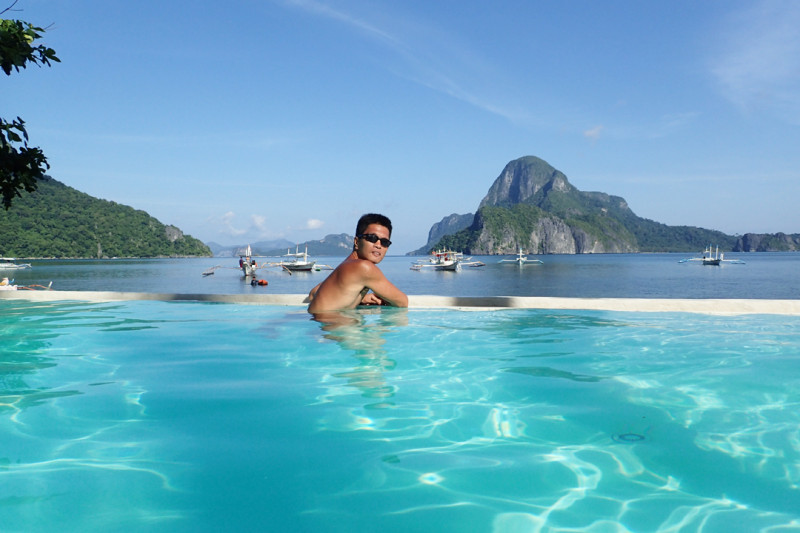 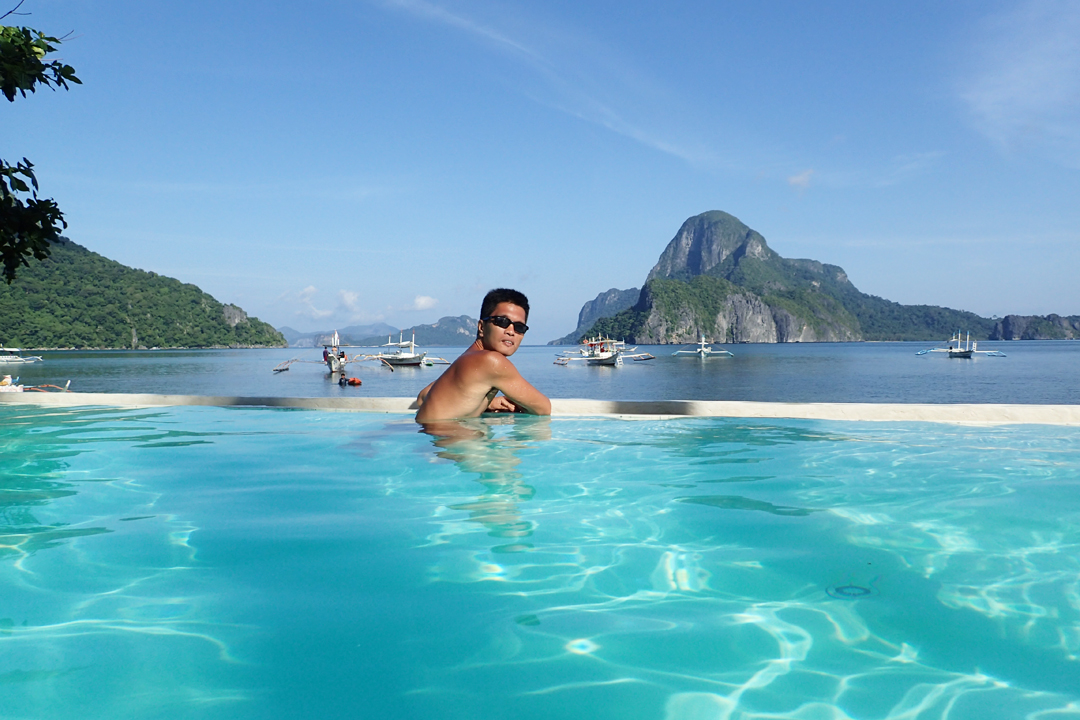 El Nido is definitely on top of my list of tourist spots to visit in the Philippines, so when a good friend asked me to recommend a place where she and her husband could spend their vacation together with their closest friends, (ahem… kasama ako dun 🙂 ,) El Nido was one of my immediate suggestions. 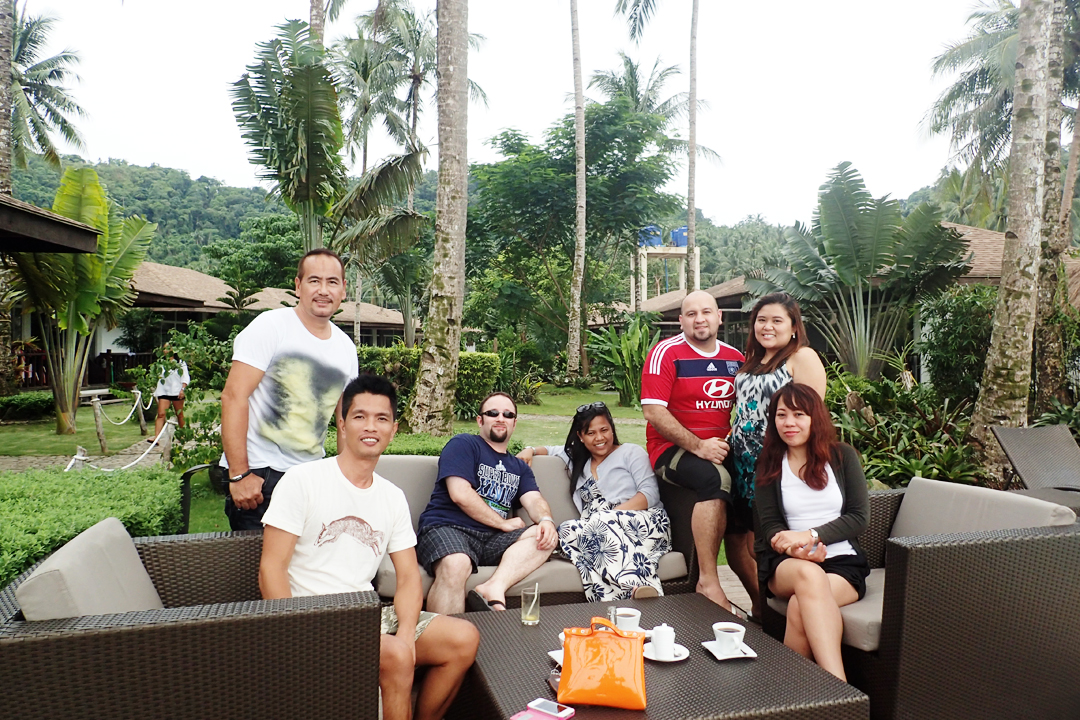 THE TRIP. It was scheduled at the peak of the wet season in the Philippines. Two weeks before our flight to Palawan, it had been raining continuously in most parts of the country. Thankfully, we were blessed with a good weather during the entire trip. Our first day was spent mostly on travelling from Manila to El Nido. It took us 8 hours to get to El Nido from Manila ( 1.5 hours on air, 5 hours on the road, and another 1.5 hour spent for lunch stop and other things.) We finally reached Cadlao Resort where we were booked for 4 nights at half hour past two in the afternoon. 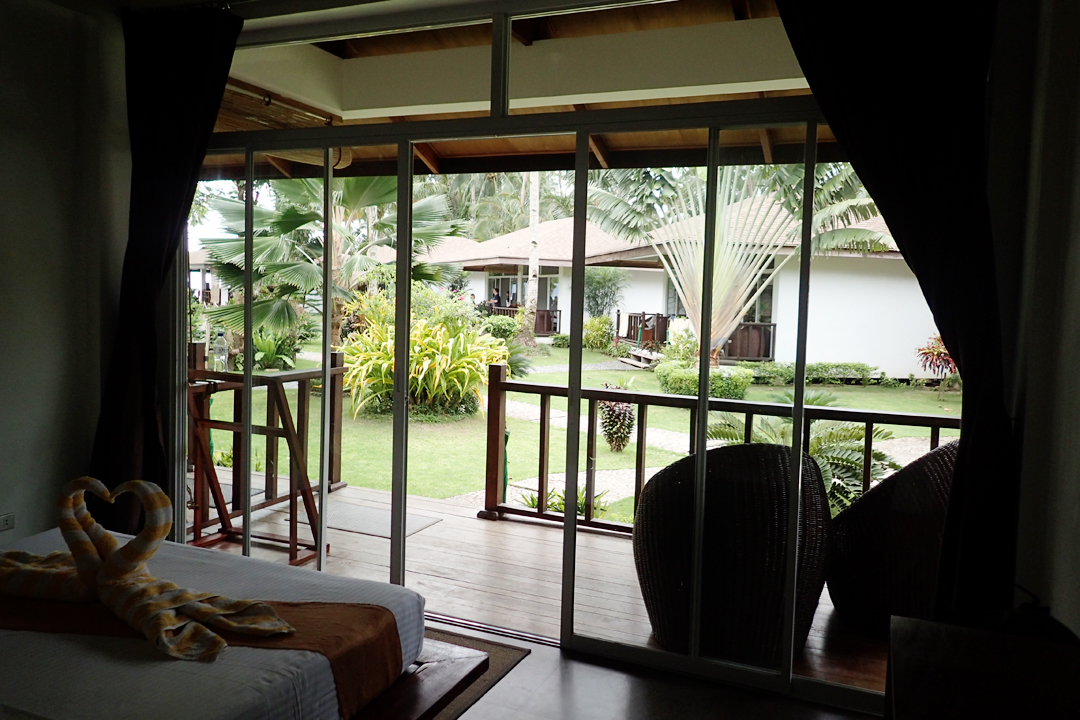 Accommodation at Cadlao Resort for almost P6,000 a night (lean season rate) is absolutely expensive for a budget traveler like me. I would have stayed in one of the cheaper accommodations at Bacuit bay if it wasn’t given to us for free 🙂 . (Thank you Queneee and Chris!) 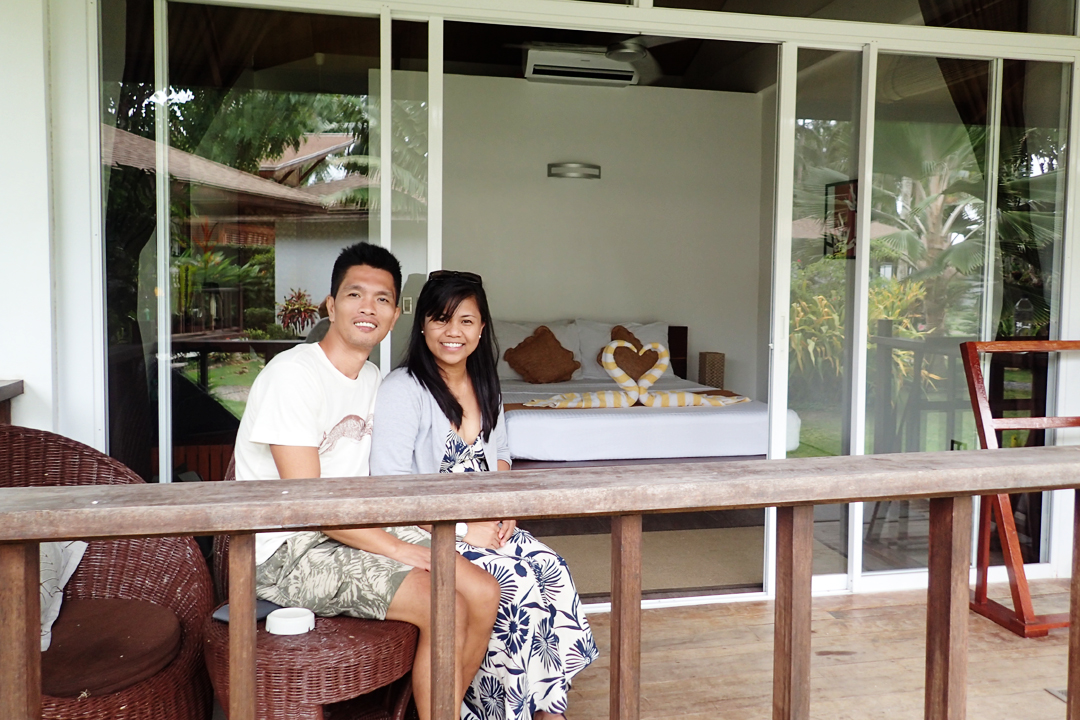 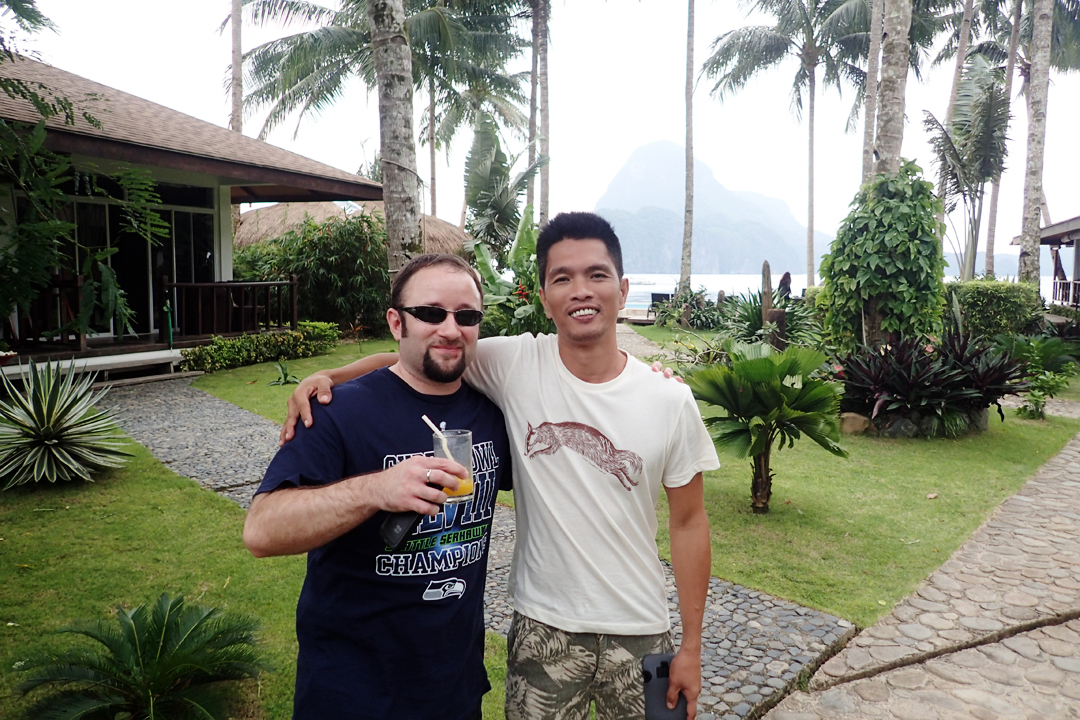 Exhausted from the long journey, we simply relaxed near the infinity pool for a while and enjoyed the view with our welcome drinks before we headed to our respective rooms to rest. At 6PM, we all agreed to walk to the restaurants near the beach to have dinner and to celebrate our good friend Bo’s birthday. It was a struggle to stay awake and lively after that. We were so tired and sleepy after dinner, we decided to go back to the resort to get a much needed rest. (thunders na talaga) 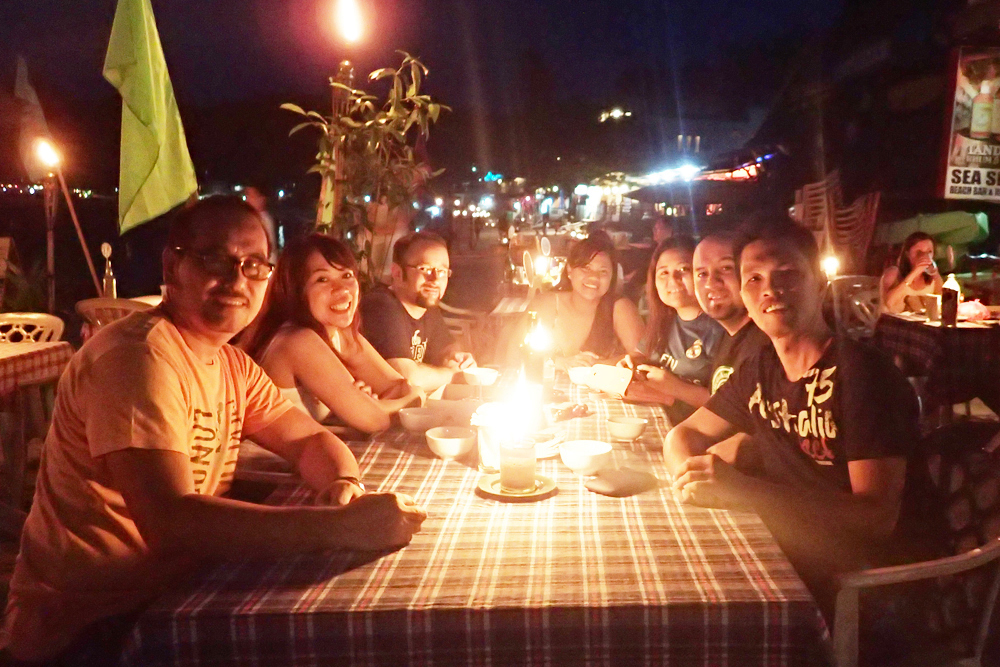 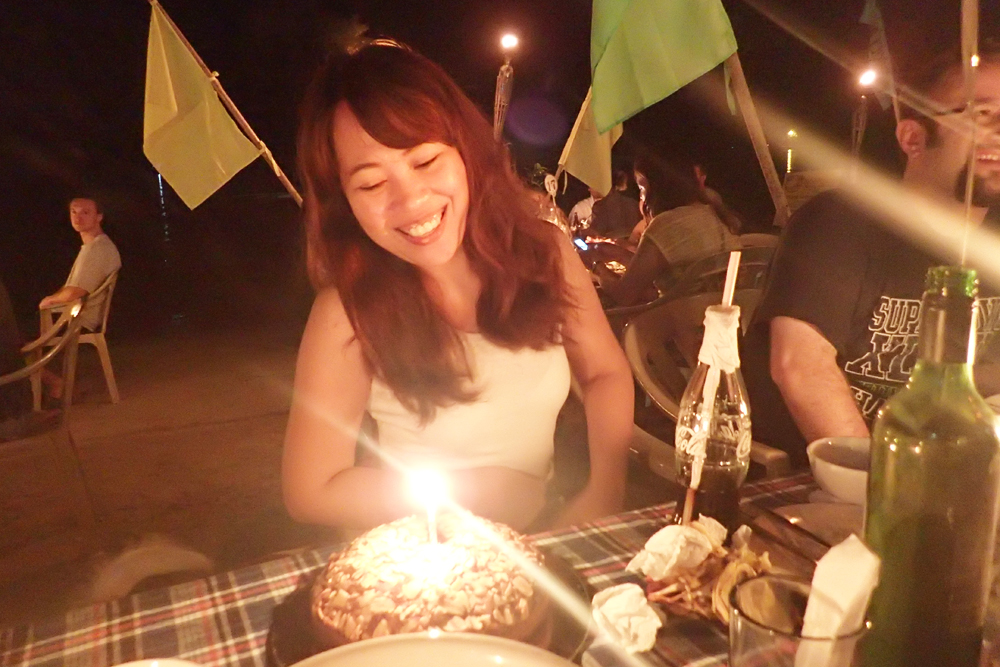 Second day. Completely recharged, we met at the resort’s restaurant for the free breakfast early that morning. We were all looking forward to our first island hopping tour. 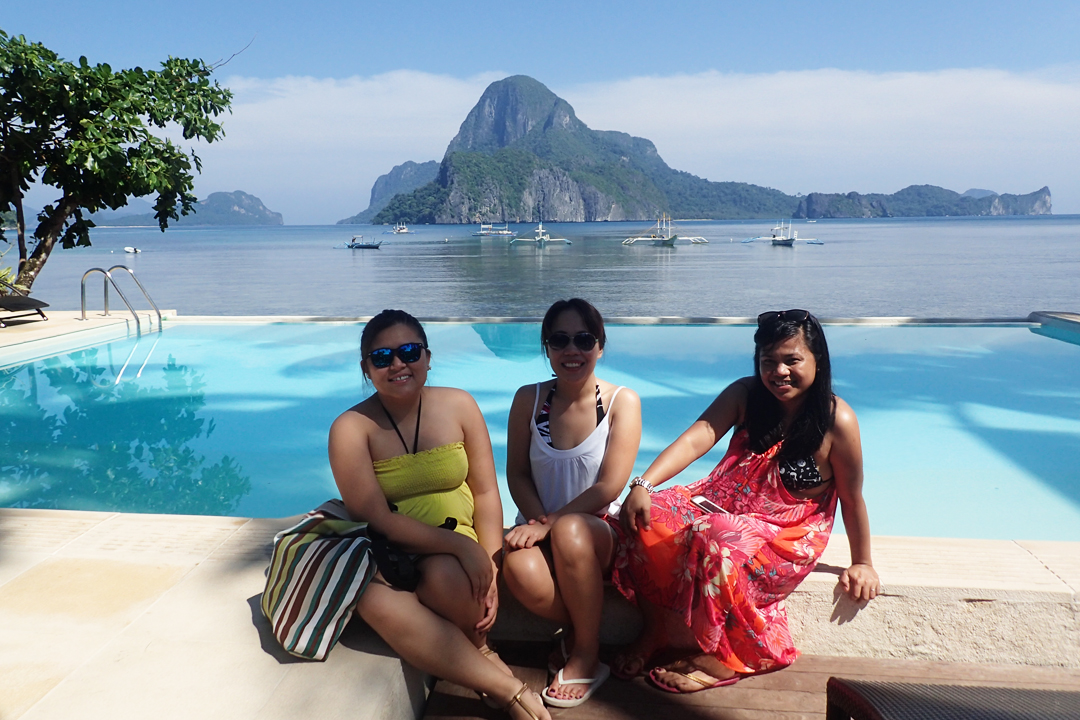 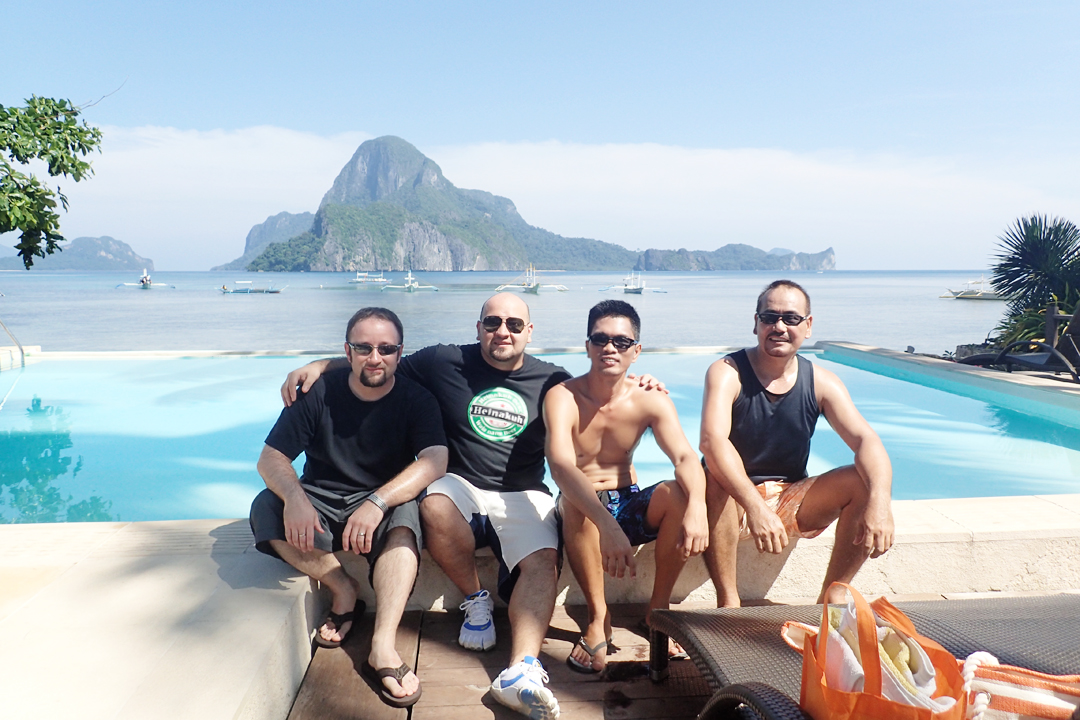 We were initially booked for tour D, but our tour organizer suggested El Nido’s Tour A instead so we could take advantage of the good weather. Destinations for tour D are just nearby, unlike some of the spots that are included in Tour A which could be a struggle to reach when the weather is bad. Standard rate for either Tour A and or D is P1200 per head. Tip. Some tour organizers in town offer a much lower price though (The lowest that was offered to us while walking around the town was P900 :-). Unfortunately, our tours were already booked and paid a week before the trip). An additional P200 pesos is collected for Eco-Tourism Development Fee (ETDF). This is a one-time payment good for a 1-10-day stay in El Nido. 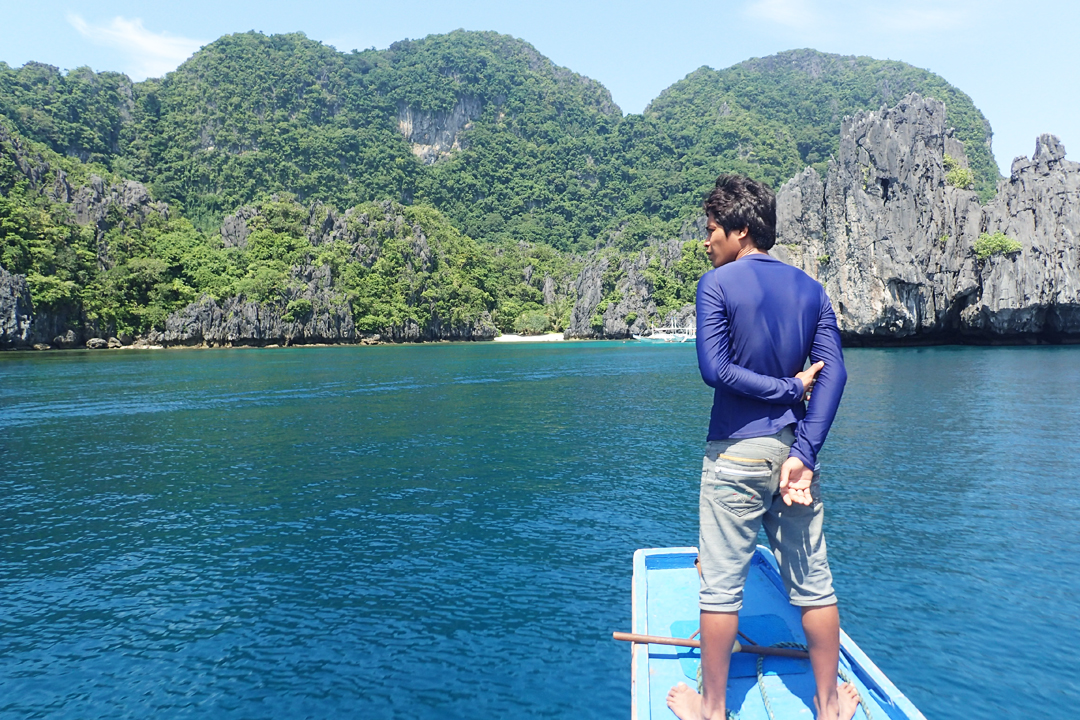 We picked Tour A and we were later joined by 6 more tourists. There were thirteen of us on the boat. 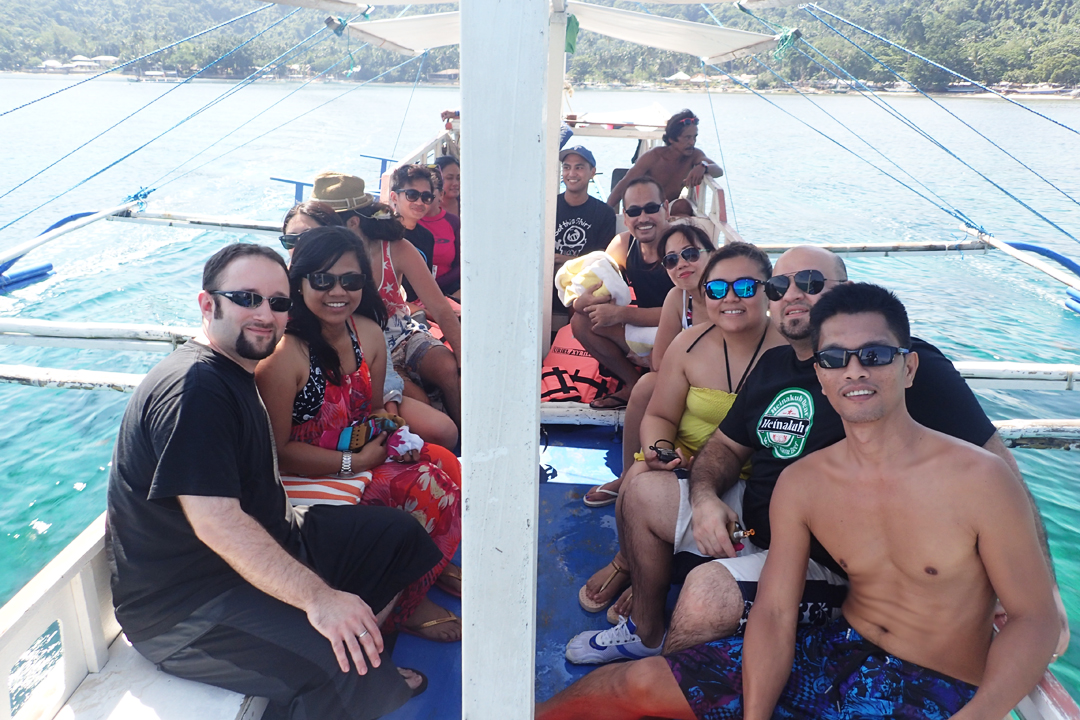 Featured destinations for Tour A are the Small and Big Lagoons, the Secret Lagoon, Shimizu Island, and The 7 Commandos Island.

Lunch at Shimizu island was something I was looking forward to during the tour. 4 years ago, during my first visit to El Nido, I was delighted when our guide set tables and chairs on the beach and prepared a sumptuous seafood lunch for us.

I wanted the group to experience the same thing, but unfortunately, that didn’t happen. We were late and there had been a lot of groups who got to the left side of the island before us. Shimizu island’s beach is separated by big rocks, and facing the island, the left side is more beautiful. The right side is littered with empty plastic bottles.

I asked one of the boatmen if there’s still a chance for us to have lunch on the left side of the island but to my surprise, he simply said, “Ask your guide!” with a dismissive look and gave me the impression that it wasn’t his job to respond to requests. Even if it wouldn’t be possible, I would have understood if he responded nicely, but on the contrary, he was arrogant and rude. I was furious, but I decided not to make a big deal out of it, and let it pass because I didn’t want to dampen the spirit of the rest of the group. Food was also a big disappointment and there wasn’t enough for thirteen people. Four years ago, island hopping tours were cheaper and better. Now, the price is doubled but the service is mediocre. 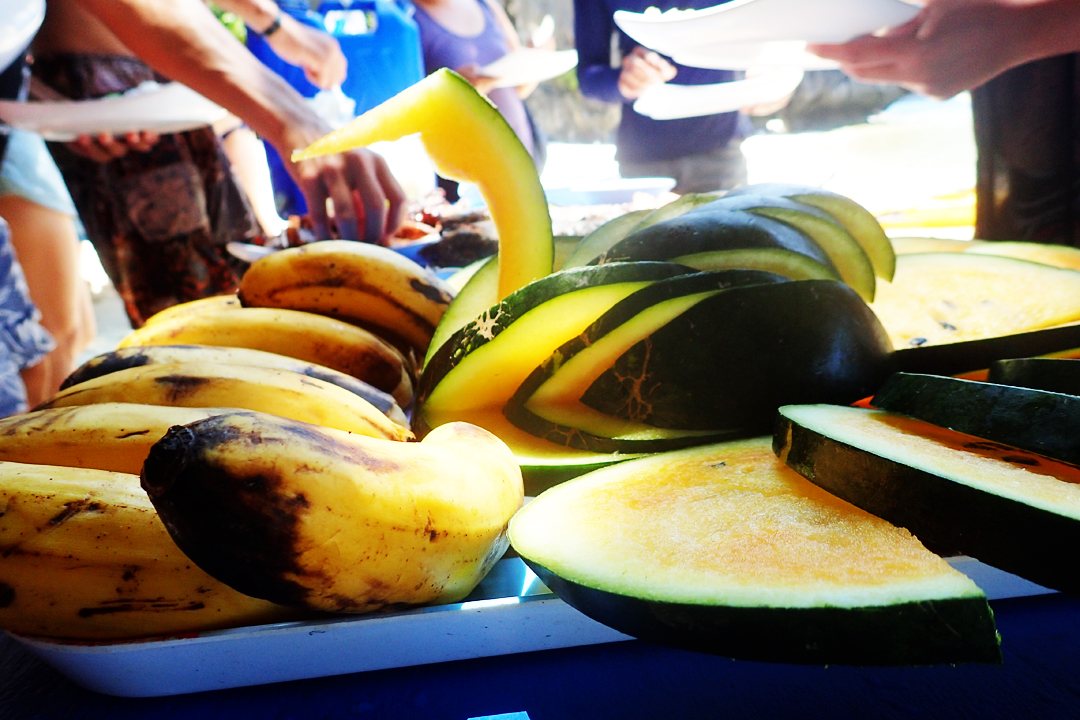 After lunch, we headed to the secret lagoon. While it’s beautiful inside, I didn’t like the water since it looked stagnant and dirty.

Final destination for Tour A is the 7 Commandos Island. The island no longer looks as pristine as it was 4 years ago with the presence of several structures and a private resort.

I still enjoyed swimming in its clear waters though and they still sell fresh buko in the island so this still remains one of my favorite spots from Tour A.

It wasn’t dark yet when we got back to the resort. As if swimming during the island hopping tour wasn’t enough, we spent the rest of the afternoon enjoying the freshwater of the resort’s infinity pool.

Note: This post is part of our 5-day itinerary in El Nido. Kindly CLICK HERE TO READ HOW WE SPENT THE THIRD DAY ON THE ITINERARY.

One thought on “MY SECOND TRIP TO EL NIDO: GETTING THERE AND ISLAND HOPPING TOUR A”

MY SECOND TRIP TO EL NIDO: A DAY OF PURE FUN AT THE TWIN BEACH OF NACPAN AND CALITANG