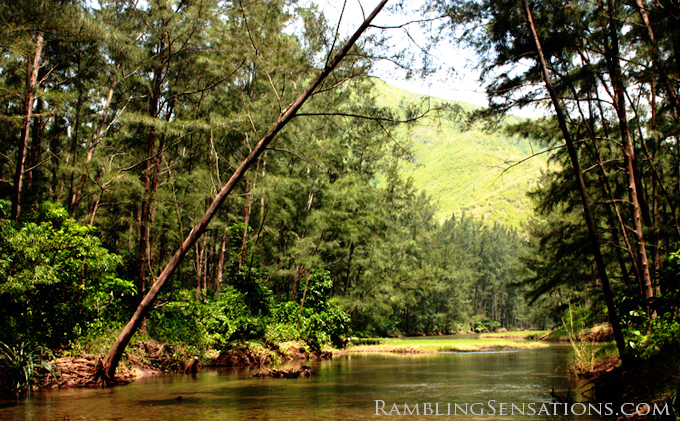 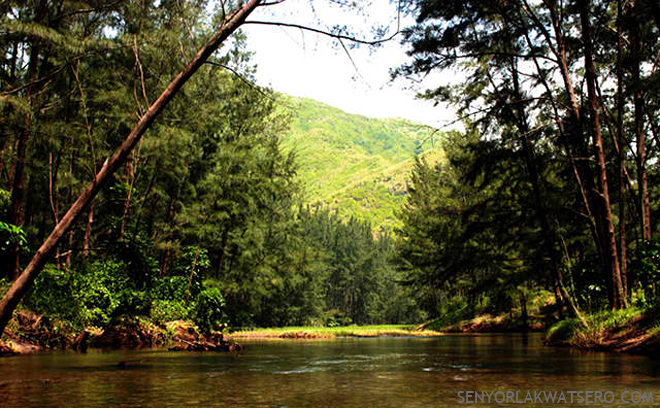 Anawangin has now probably become one of the top and most popular beach destinations in the province of Zambales. This seculded cove delights its visitors with its pristine ash-colored sand beach and its unique yet amazing coastal landscape. Unlike any of the beaches in the Philippines where tropical coconut trees usually line up near the shore, Anawangin’s best feature is the radically distinctive piles of tall agoho trees (pine-like trees) growing strongly and vigorously in its coastland. 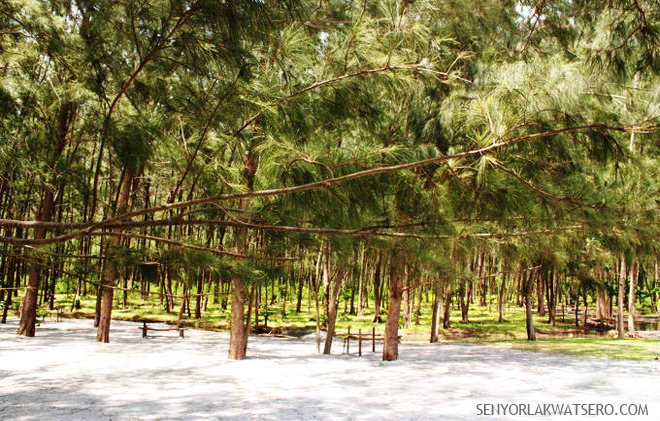 This remarkable characteristic of Anawangin is probably the main reason why local and foreign tourists alike are drawn to this secluded cove along the coast of Zambales. 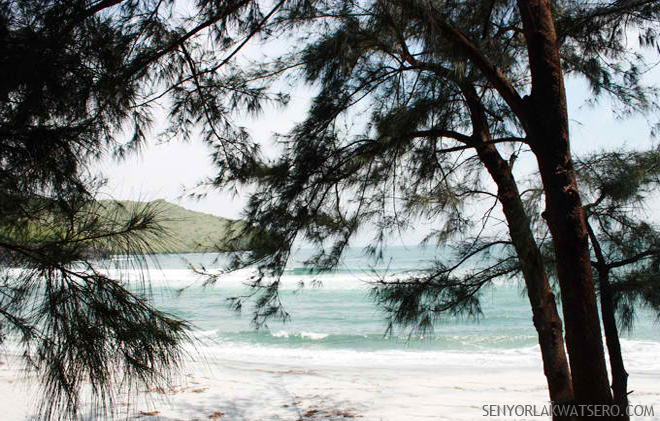 When I saw pictures of Anawangin for the first time, my reaction was a blend of wonder and delight. 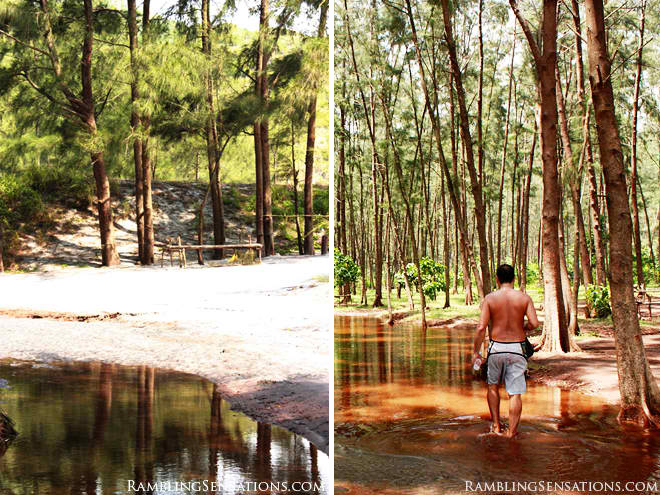 I became even more excited when I found out that a trip to the beach would only take a four to five-hour drive from Manila, followed by a short 30-minute pump boat ride from barangay Pundaquit in the town of San Antonio (jump-off point) to the cove. There are no accommodations in the area and when one decides to spend the night there, the only option is to set camp. Some of my friends and officemates have expressed their interest on a camping adventure before, and Anawangin looked like the perfect place to go. Together, we began to prepare for the trip. Unfortunately however, our so-called camping adventure did not go well as planned.

Rain, Rain, Go Away. Days before our scheduled trip, it had been raining continually which made us unsure whether to push through with the plan or not. As a matter of fact, the night before we were set to hit the road, it rained so hard I thought no one from my group would still be interested to go. I sent each of them a text message asking if they want to cancel the trip but to my surprise, they said that they were all packed and were ready since the beginning of the week, and that unpacking seemed to be a sad and a difficult thing to do. “Come rain or shine, we would continue as planned!” was the unanimous decision.

After 7AM the next day, we boarded a Victory liner in Cubao bound for Zambales. Along the way, the rain began to ease off and by the time we reached Pundaquit, it finally stopped and we could finally see the rays of the sun piercing through the clouds. It seemed liked we made a good decision after all.

As soon as we alighted from the bus, tricycle drivers approached us and offered to take us to Pundaquit beach. We hired two and asked them to drive us to where we could rent a boat that would take us to
Anawangin. Although we sort of expected it, we were still disappointed when they told us that there were no available pumpboat rides to the cove due to the dangerous sea condition that time. The waves were enormous and seemed to double up on each other, there was no way a pumpboat could pass through them without flipping over. So much for our great camping adventure.

We decided to check out some of the beach accommodations in the area. Beach resorts in Zambales seemed to be a lot pricier as compared to other beach accommodations I had been during my previous travels. One of the resorts offered a nipa hut cottage with no beds for P2,500.00 a night. Seriously! And it was not even the peak season. Luckily, we found Patio Del Sol. Each of their nipa hot cottages was well-designed, had one queen-sized double decks that could accommodate up to 4 persons. Since it was the off -peak season, they gave us a special price of P1,000.00 for each cottage. Perhaps the only problem for a few was that the shared bathroom was about 20-30 meters away from the cottages. Personally, I didn’t really mind. What was more important for me was that I slept comfortably that night. 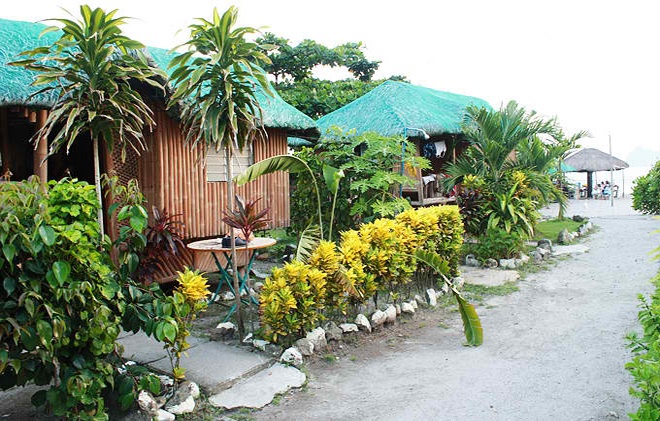 The Trek. Trekking was never part of the plan. Nor did we expect to climb the steep mountains of Zambales for 5 hours to get to Anawangin. I was not even aware that there is another way to get to the cove aside from the 30-minute pumboat ride from Pundaquit beach. But trekking was our only choice that time. Otherwise, we would go home without setting foot at the Anawangin cove.

I came to find out about this while chatting with one of the staff at Patio Del Sol. She told me she could contact someone to guide us during the trek if we wanted to. I asked the rest of the group if they liked to trek early the next day and we agreed that if the sea conditions wouldn’t change and trekking would be our only option, then off we go.

I woke up early the next day and went directly to the beach to see if there had been any improvement with the sea condition. It looked like the waves were not as big as the previous day’s, but I thought it would not still not be safe to go to Anawangin through a pumpboat with its current condition. This was later confirmed by two passing fishermen I talked with while I was walking along the shore.

After an early breakfast, we set off for the 4-5 hour trek. We brought water and food with us for lunch 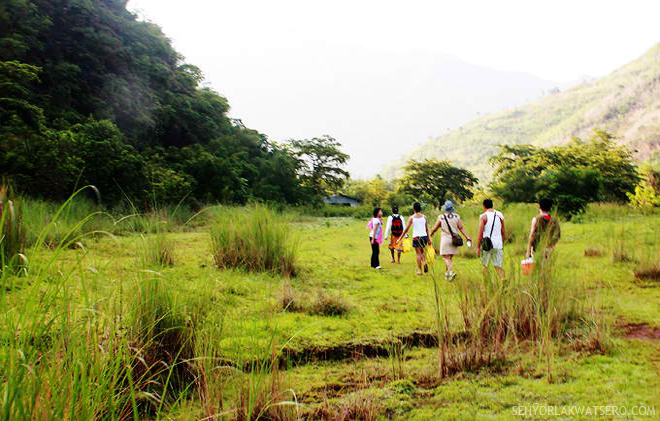 The trek was safe but not easy. It was exhausting. With half of the group not having any prior mountain climbing experiences, I thought we would never make it. 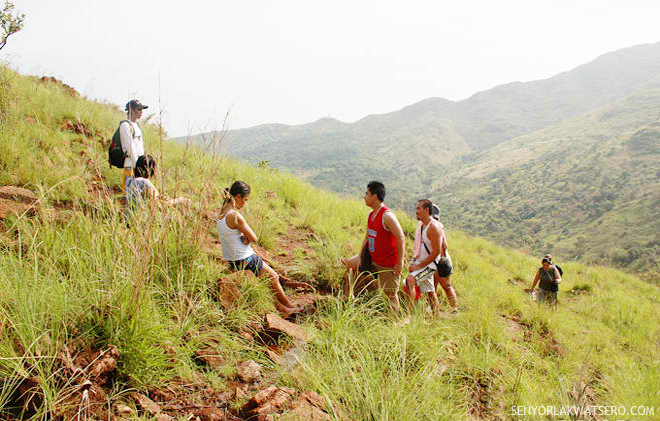 But the beautiful scenery kept us going. During the first 2 hours, we crossed a few rivers and we had to be really careful as the currents in these rivers were quite strong. I came to know later that they dry up during summer. 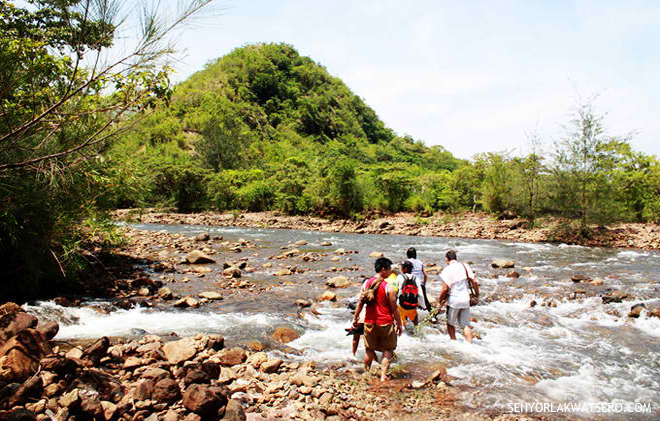 Along the way there were really great spots for swimming and occasionally we stopped to rest and enjoy a refreshing dip in the cool crystal clear waters of the rivers. 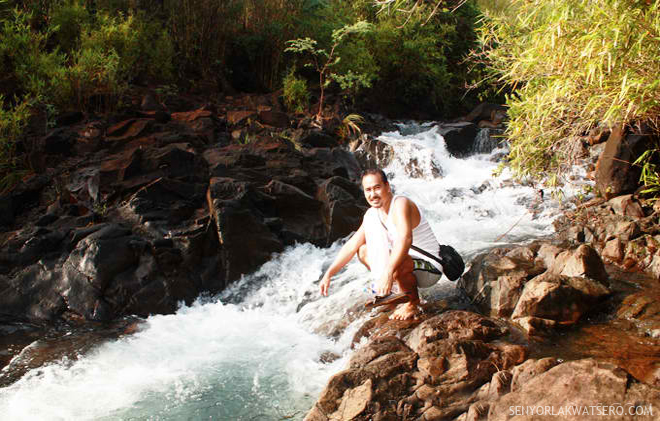 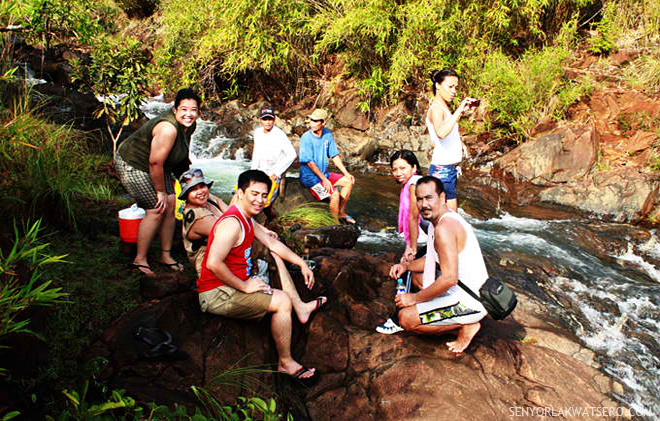 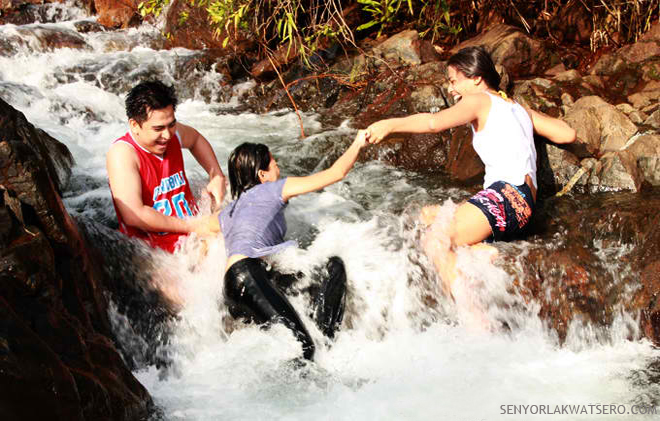 After few hours more, we reached the top and were rewarded with an arial view of Anawangin cove. 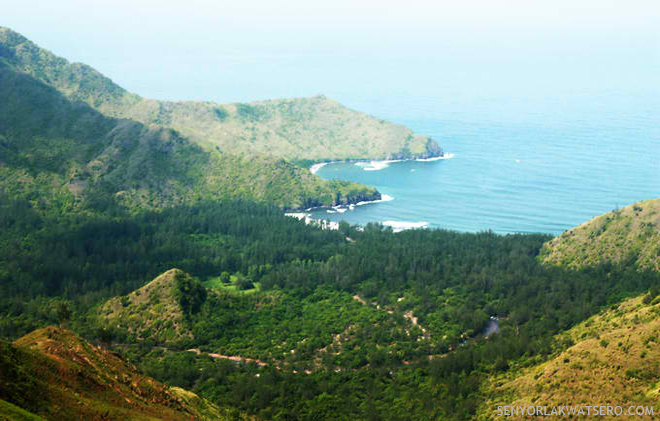 We began to descend passing through a rugged muddy trail that leads to the beach. We thought going down was going to be lot easier but we found out that it was as difficult as climbing up the mountain. We had to control our speed or else we would slip all the way to the bottom.

Before long, we could already hear the sound of the waves, an indication that we were only a short distance away from the beach. And after a few minutes more of walking, we finally reached our destination. 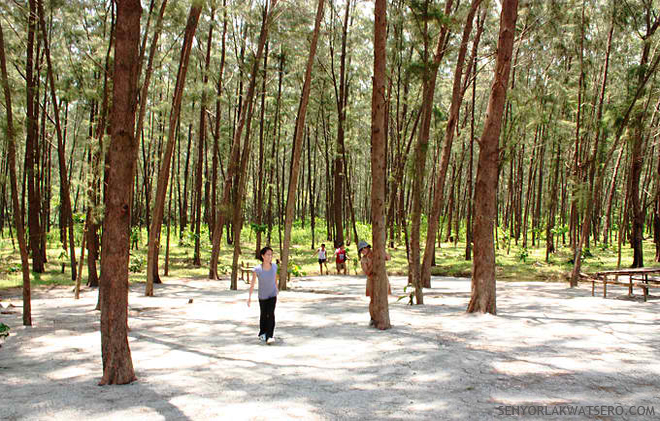 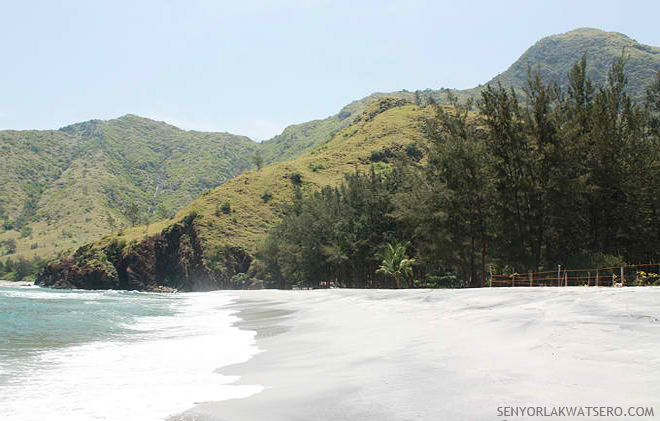 Aside from the caretaker, we were the only ones in the beach. The sea was still rough but the big waves did not prevent us from swimming. 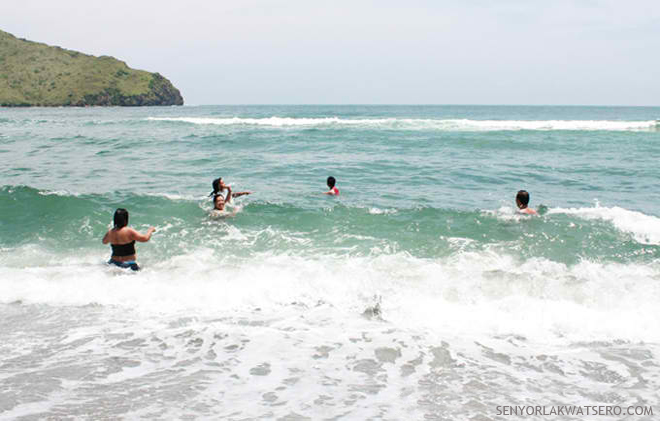 We also enjoyed taking a dip in the river located a few meters from the beach. The view here was spectacular, more like a wilderness scene from the countries in North America. 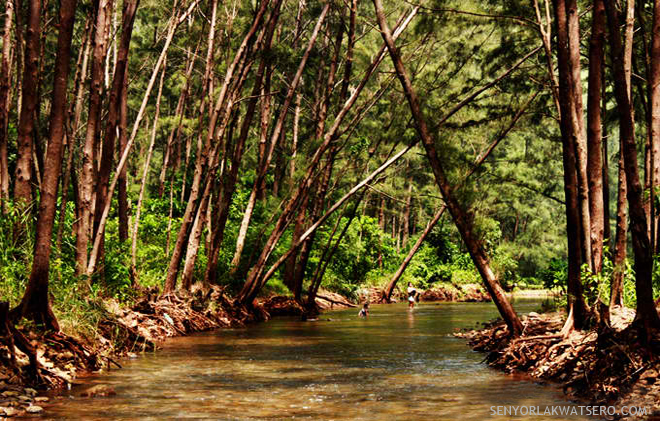 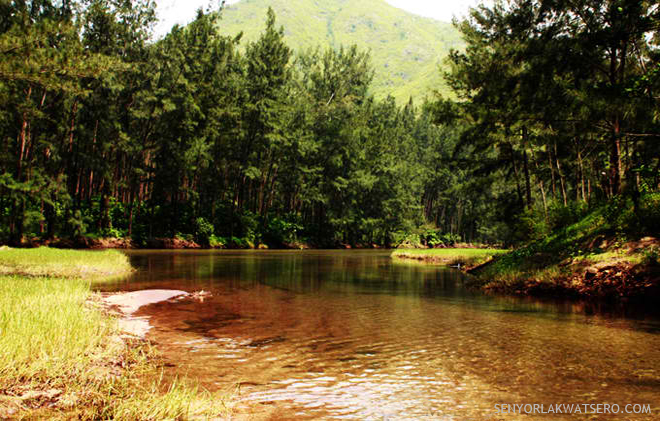 During lunch, we talked about how we we should go back. If we had to take the same route, we had to leave early to make sure we would be back in Pundaquit before it gets dark. But there seemed to be not enough energy left in us to do another trek. By that time, it looked like the conditon of the sea was getting better and we asked our guide if it was already possible for us to go back through a pumpboat. To our great relief, he said yes and agreed to trek back to Pundaquit to get 2 pumpboats for us.

My Most Dangerous Boat Ride Ever. By 4PM, the two pumpboats arrived. Unfortunately, the waves had become bigger again due to high tide. 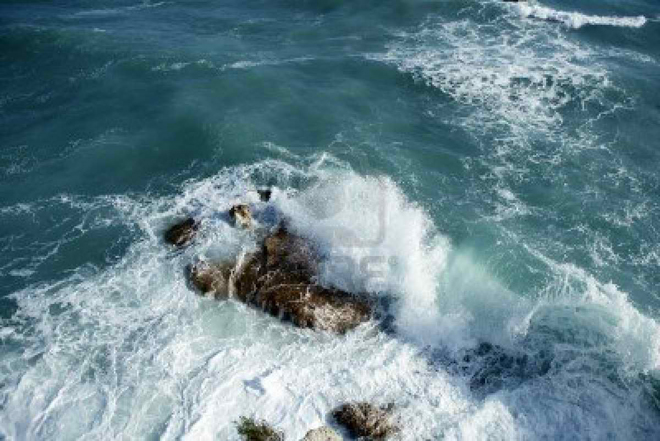 It took sometime before the boat could land on the beach. When they finally did, we immediately climbed into the boats, put our lifevests on and waited for the big waves first to disappear before setting off. The boat where I was at went first. It looked like it was a perfect timing at fist, when all of a sudden out of nowhere, a giant wave appeared. It was getting bigger and bigger as it approached us. It seemed as if I was facing a wall of seawater as high as a two-storey house. 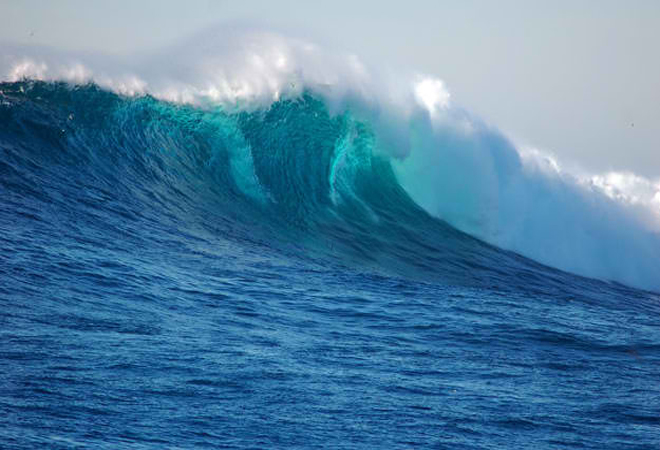 It made me feel so small and helpless. Our boatman drove the boat faster to avoid the wave from crashing on us. In split seconds, we were on top of the monster wave and then was quickly dropped behind it. We were told later that day that for a while, the other group could not see us from the beach and thought we were gone. But we survived. Now, there was the other group to worry about. But, their boatman might have learned from what happened to us and passing through the waves was not as frightening to them as what we had experienced. As the sun began to set, we all made it safely back to Pundaquit. 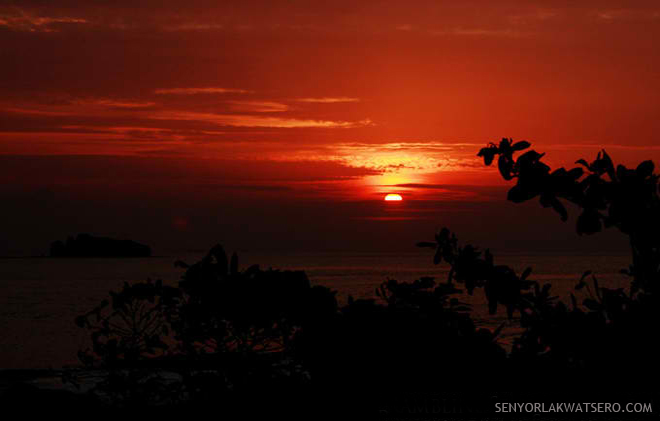 9 thoughts on “The Trek to Anawangin Cove”