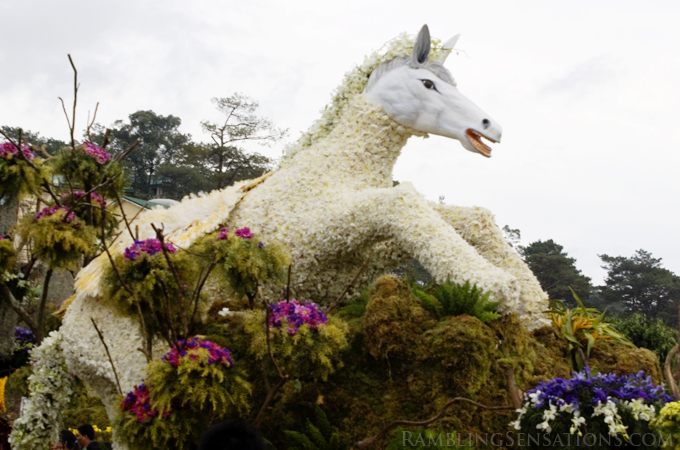 We arrived in Baguio at 8:00AM on Saturday morning (February 26, 2011,) just when the street dancing competition was about to start. We had no time to go to and drop off our backpacks at Maryknoll where we were booked for two nights. We had no choice but to carry our backpacks, run and quickly find a good spot to watch the event. Never mind that the trip to Baguio was so hard for us, (for most people, I believe) having been forced to ride a bus bound to Urdaneta, Pangasinan, and then take a mini van ride to Baguio City. It was the best option left for us. All buses from Manila to Baguio were fully booked.
We positioned ourselves in one of the streets near Burnharm Park, where the dancers would turn right from Harrison Road leading to Athletic Bowl, their final stop and where the final dance showdown was held. Surprisingly, no matter how tired I was from the trip and due to lack of sleep for the last few days, I was quickly stirred up with excitement as the sound of gongs and drumbeats became louder, an indication that the streetdancers were getting nearer to where we were. Soon we saw a group of PMA cadets leading the the parade, followed by local government officials. 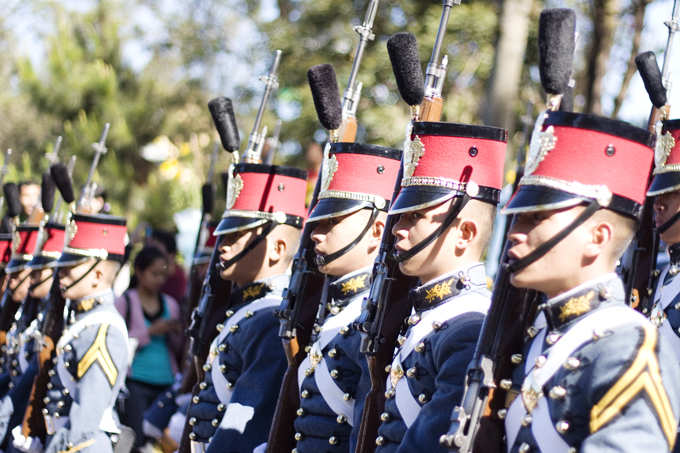 And a couple of minutes after that, the crowd began to cheer louder as soon as the first group of streetdancers came into view. 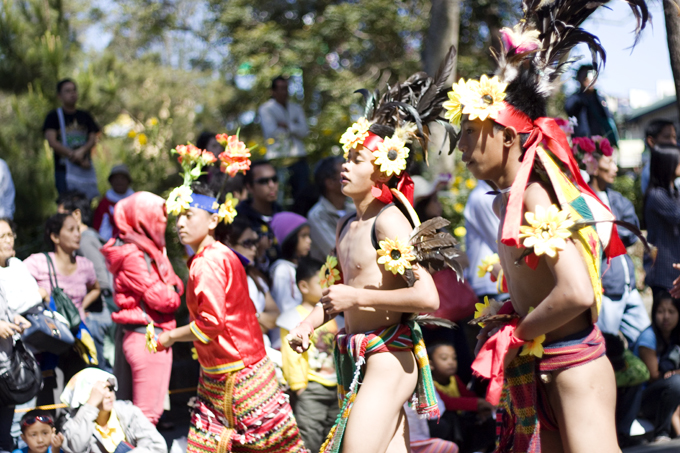 I was delighted and felt really proud to hear the sweet familiar sound of the Panagbenga theme once again which was composed by my former music teacher at Saint Louis University, Dean Macario Fronda. 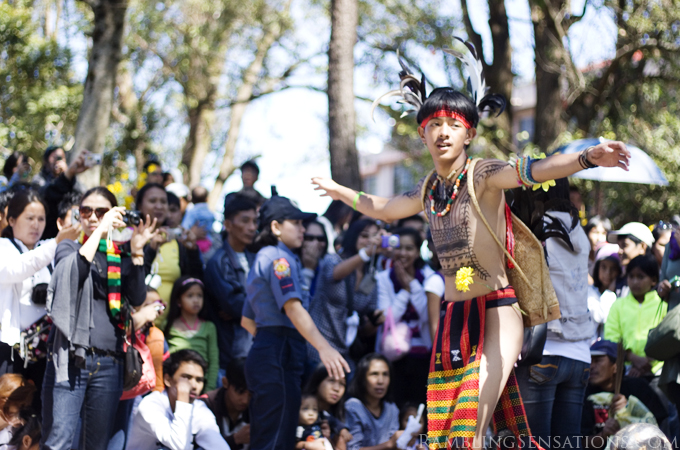 Wearing traditonal Igorot costumes, the dancers did their best to outperform each other while showcasing the rich culture of the Cordillerans. Thousands of streetdancers from more than than 20 groups who participated in this event featured the various ethnic dances of the Cordillera tribes. 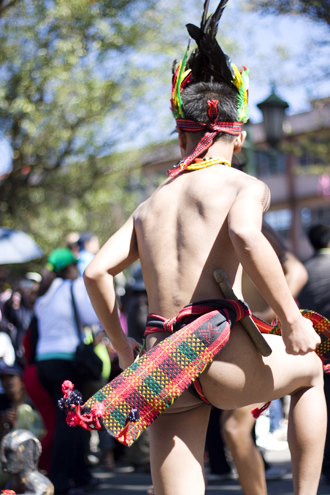 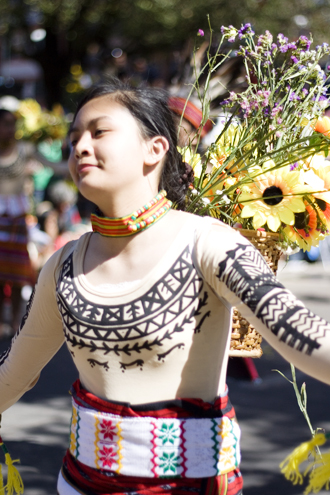 The streetdancing parade lasted for approximately 4 hours. After seeing the last group, fatigue and tiredness suddenly came back, so we immediately looked for a taxi and went to Maryknoll for the much-needed rest. 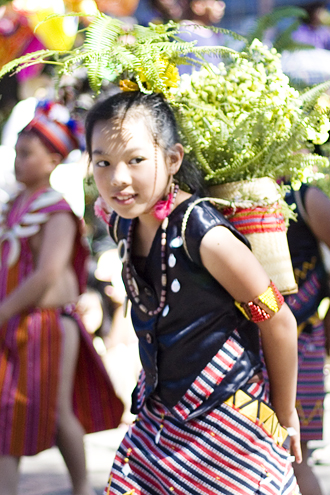 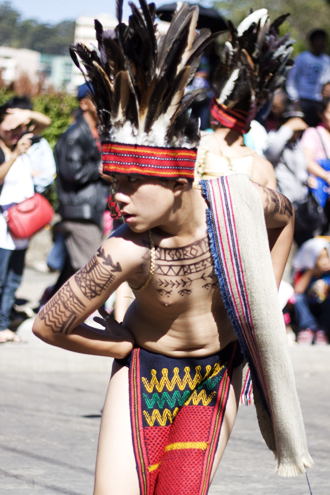 Ater we had lunch in one of the carinderias near Maryknoll, I slept the whole afternoon and only woke up at 6PM. We went back to the city proper and had dinner at Cathy’s Place. We walked around the city for a while and checked out some of the activities that were organized in line with the flower festival. There were local singers performing at Melvin Jone’s. A part of Burnham park was transformed into a market place where all sorts of merchandise were being sold. The city was too crowded, all streets looked like Metro Manila’s Divisoria during the holidays. Finding a vacant cab was so hard. It took us almost an hour moving from one place to another before we finally found one. We were finally back at Maryknoll by 10PM.

The Float Parade. We went back to city very early the next day to find a good spot to watch the event. We were advised by a friend yesterday to go to Upper Session Road where the parade would start. 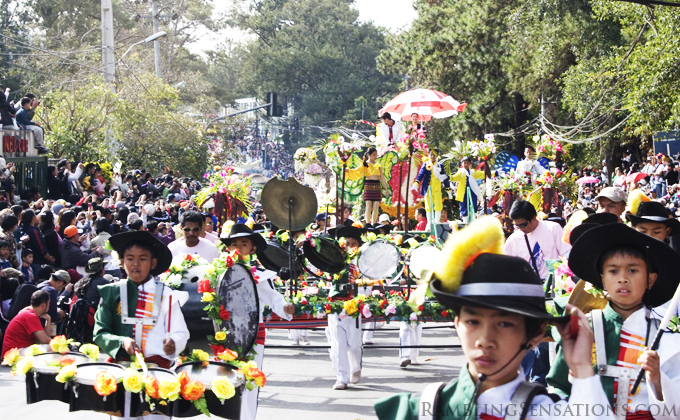 There was already a huge amount of spectators by the time we got there, though. We strategically eased our way towards the front, slowly and very carefully to avoid hearing unpleasant remarks from the crowd. 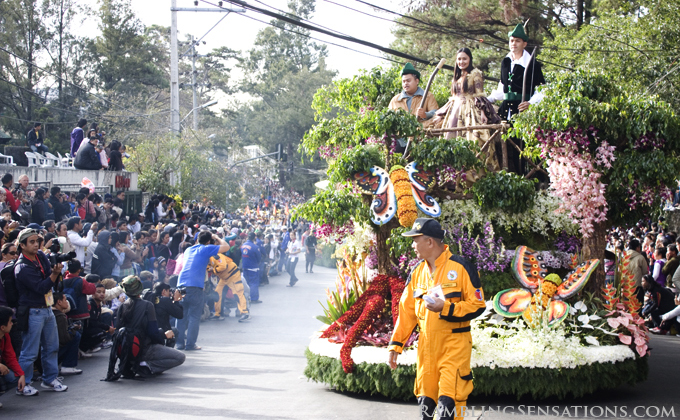 The much awaited event of Baguio City’s 16th Flower Festival began at 8:00am as scheduled. There was a total of 25 beautifully decorated floats that were featured during the parade, and the marching- band competiton which also happened on the same day provided a festive sound to the event. 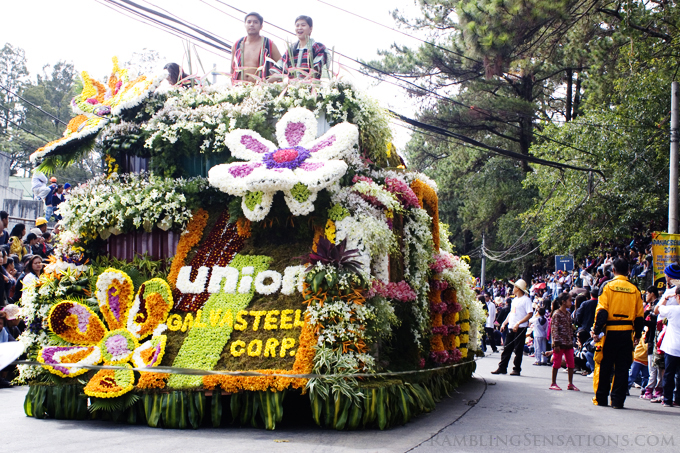 Government agencies, major sponsors and popular corporations such as Jollibee, SM, TV 5, MV Lhuiller, Samsung, and more, wowed the the spectators with their amazing entries. 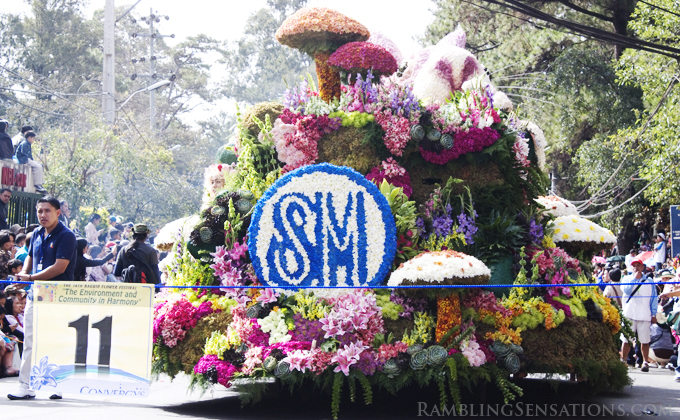 Grand and colorful floats with beautiful landscapes and gigantic flower rabbits, butterflies, and horses among other things were displayed on each of them. 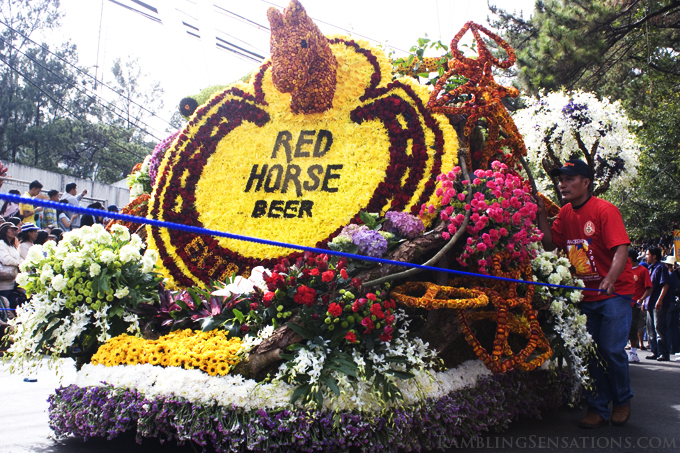 Various types of flowers from the city such as roses, anthurium, chrysantemum, everlasting, sunflowers, and other cut flowers in different colors were used to adorn each of the floats. 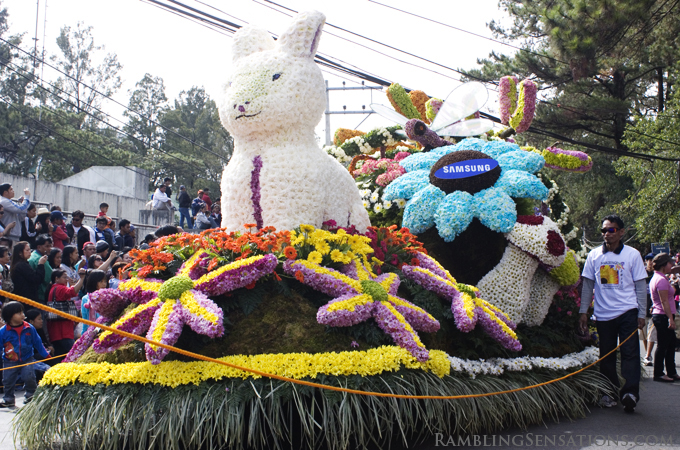 Over P150 million was said to be the accumulated cost of all the floats with approximately P300,000 to P500,000 spent on each because of the expensive flowers used to decorate them. 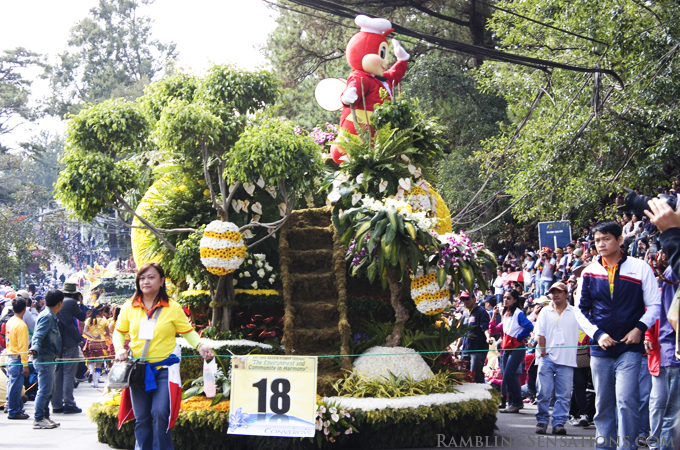 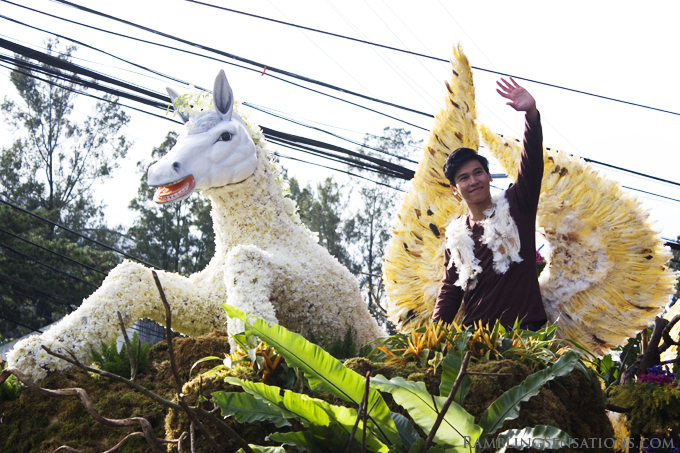 But the main star of the this year’s Panagbenga Grand Float Parade I believe was the replica of Toruk, Avatar movie’s King of Pandoran skies, which was showcased in Efficascent Oil’s entry. 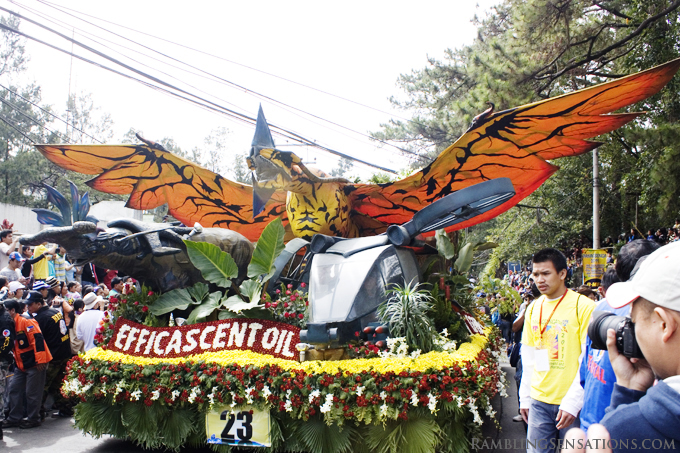 It was the last of the 25 floats and as the crowd got more excited, they pushed and moved forward to have a closer look and have their pictures taken infront of it. 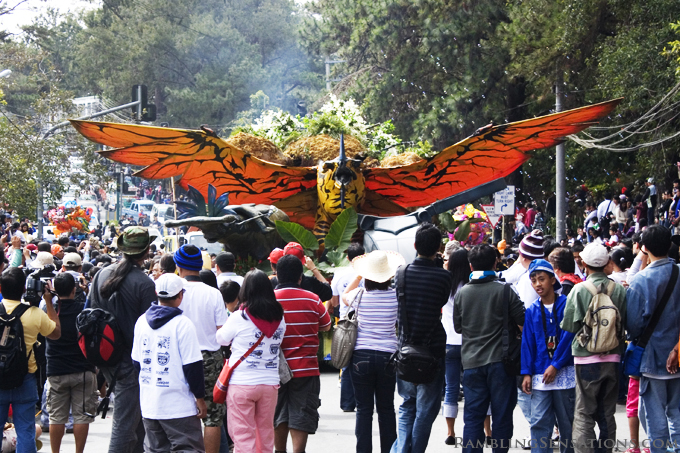 The float had to stop several times and the marshalls who were assigned to keep order had a hard time clearing its way. 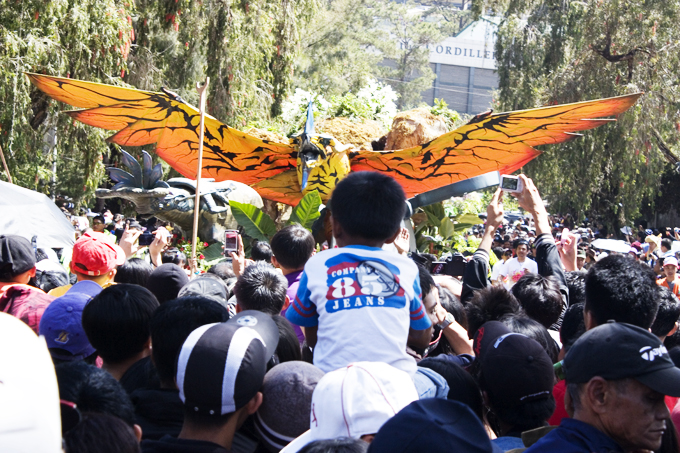 This year’s grand float parade lasted for more than 3 hours. We tried to go the Athletic bowl ,where the parade would end, for more picture-taking but it was so hard to pass through the huge crowd who came to watch this annual event. We just decided to have lunch at Cathy’s Place (again) before we went back to Maryknoll to rest. 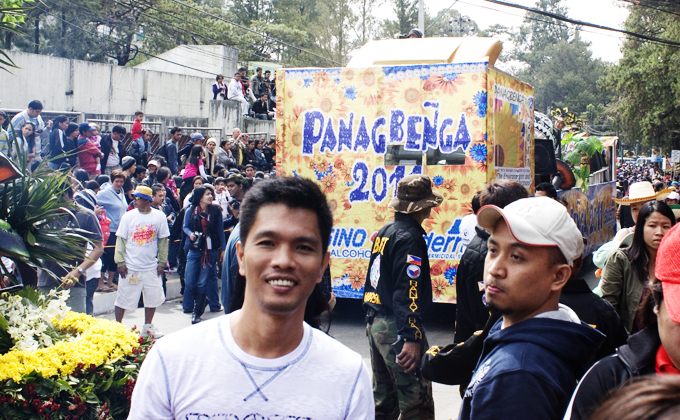 It was so nice to watch Panagbenga again. I was in Baguio when the flower festival was first held and I was just so happy to experience it once more after so many years, and I feel really proud that Panagbenga turned out to be one of the biggest and most-celebrated festivals in the country. Way to go, Baguio! May you continue to bloom, Cheers!

A Cosmic Journey in the City of Pines