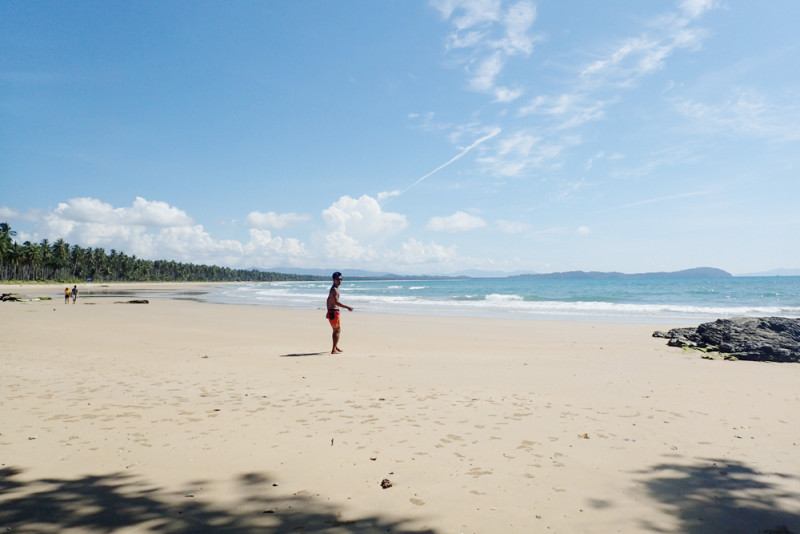 HOW TO GET TO LONG BEACH, SAN VICENTE, PALAWAN. The 5th day on our El Nido itinerary was allocated mainly for traveling back to Manila, for most of us that is, as my Palawan adventure wasn’t over yet. Together with my travel buddy Jim, I woke up at 4:00AM to get ready for our early trip to San Vicente, Palawan. Yes, our next destination was the longest white beach in the country!

HOW TO GET TO LONG BEACH, SAN VICENTE, PALAWAN FROM EL NIDO.There are two options:

Though this may sound really fast and easy, it may also take longer depending on proper timing. While a van or a bus would pass this way every 2-3 hours ( A shuttle van would pass by Itabiak crossing roughly between 7AM-7:30AM, 10AM-10:30AM, 2-2:30PM and 4PM-4:30PM, and 10-10:30AM and 5-5:30PM for the ordinary bus) there’s no telling that you will be there at exactly the right time when any of the vans or buses would pass by. You can either be just in time, too early, or late. If you miss one van for a few minutes, you will be stuck in the waiting shed for 2-3 hours waiting for the next ride. The vans may also be full by the time they reach Itabiak crossing. You’d have a better chance with an ordinary bus. If you would decide to take this route, I suggest that you should be at Itabiak junction before 10AM.

Another option is to hire one of the habal-habal (motocycle) drivers in the area to take you to San Vicente Poblacion for more or less P300/motorcycle. A bit of warning though. It’s gonna be one hell of a dusty bumpy ride. The road from Itabiak crossing to San Vicente is is still under construction and its condition is really bad as of the time of writing.

Option 2. Via Roxas City Bus Terminal. Ride a bus or a van from El Nido going either to Roxas or Puerto Princesa and ask the driver to drop you off at Roxas City Bus Terminal. The bus station is along the national road. Travel time from El Nido to Roxas is about 2-3 hours. Vans are usually a faster option. Bus fare is about Php230, and Php350 for an air-conditioned shuttle van.

HOW TO GET TO LONG BEACH, SAN VICENTE, PALAWAN FROM PUERTO PRINCESA. If you’re coming from the airport or city, ride a jeep or a tricycle to San Jose Bus Terminal. It may take about 10-15 minutes to get there. Fare is about Php12. A bus bound for San Vicente usually leaves around 6AM (first trip) and 1PM (last trip) while a van is scheduled to leave the terminal at around 4AM, 7AM, 9AM, 11AM and 1PM. From San Jose Bus Terminal, it may take approximately 5-6 hours to get to Poblacion, San Vicente. Bus fare is Php200 and Php300 for the shuttle van.

HOW TO GET TO LONG BEACH, SAN VICENTE, PALAWAN FROM PORT BARTON. One of the featured island hopping destinations in Port Barton is the Long White Beach at Poblacion, San Vicente. Island hopping tours which include other awesome destinations cost around Php1300-P1500/boat or Php500/pax. You may join one of the tours and tell your boatman/guide to simply leave you once you are in Poblacion, San Vicente. The boats being used for island hopping tours usually dock at the port of Poblacion. Another option is to ask around for the boat that occasionally go directly to Poblacion from Port Barton. There is no regular schedule of this trip though. The fare is P200 and may take 30-45 minutes. Last option is to travel back to Roxas City then ride a bus or van to Poblacion, San Vicente.

7 thoughts on “HOW TO GET TO LONG BEACH, SAN VICENTE, PALAWAN”

LONG BEACH SAN VICENTE PALAWAN: THE SEARCH FOR THE NEXT BORACAY IS OVER!