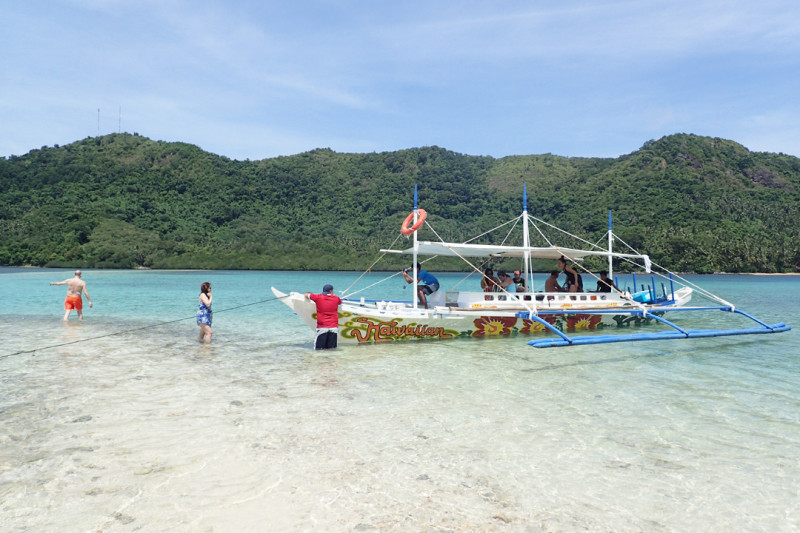 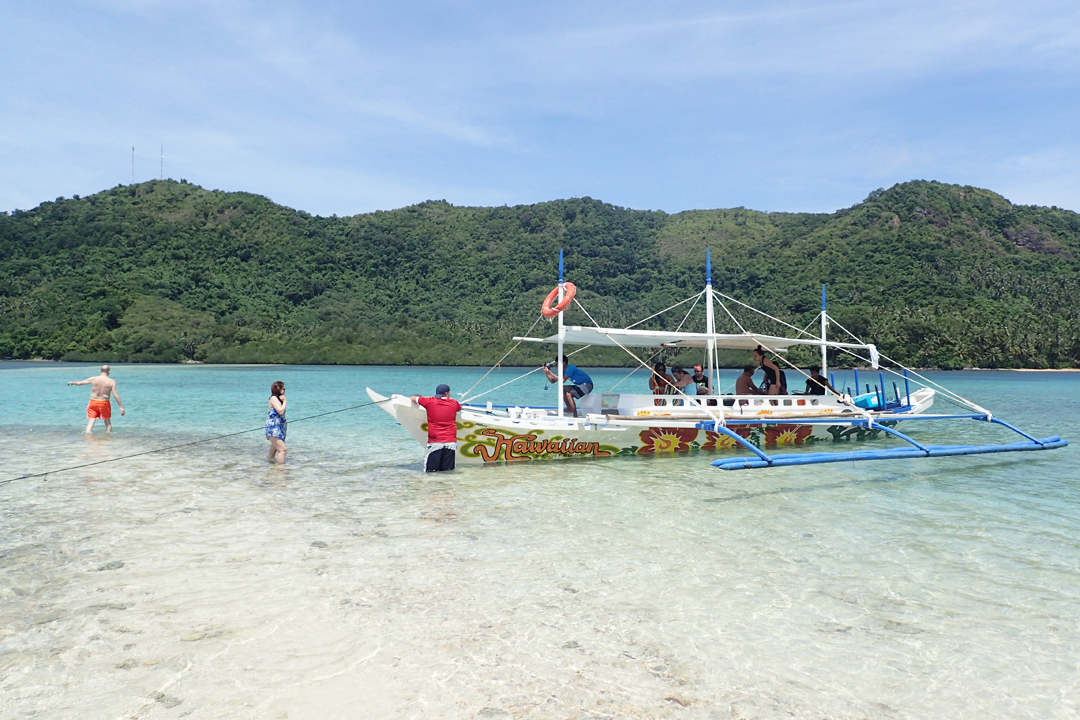 There are mainly 4 island hopping tours in El Nido which are called Tours A, B, C and D. Each tour starts at 9AM and ends at 4PM.

Tour A brings the island hoppers to the Small and Big lagoons, Secret lagoon, and the 7 Commandos island and a lunch stopover at Shimizu Island. (Standard rate: P1,200 per head as of August 2014 )

Tour B heads to the Snake island, Pinagbuyutan Island, Cathedral cave, Cudognon cave and may also include snorkeling infront of Pangulasian Island, and sunset watching at Ipil beach. (Standard rate: P1,300 as of August 2014)

Tour D features the Cadlao lagoon, and the beaches of Pasandigan, Natnat, Paradise islands. (Standard rate: Php1,200 as of August 2014) 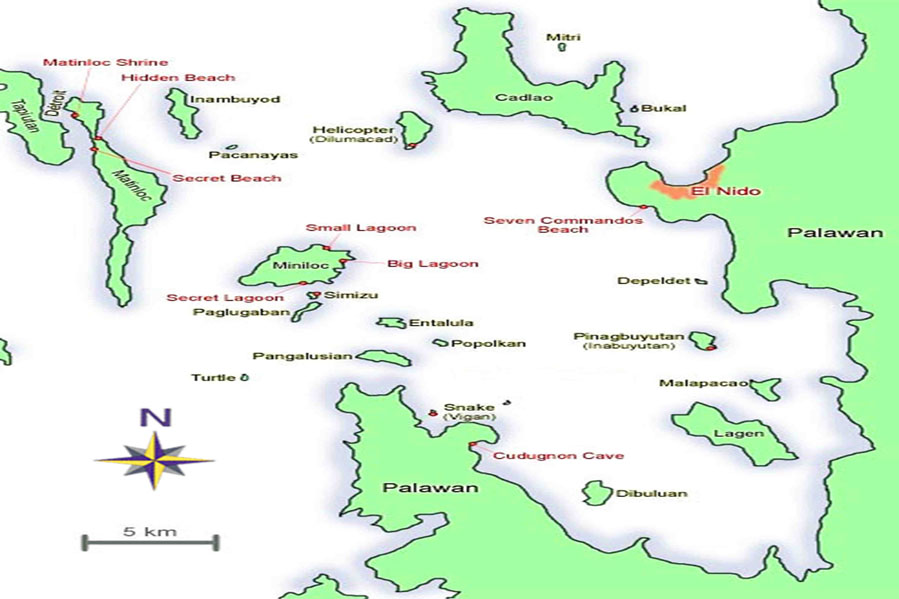 EL NIDO ISLAND HOPPING COMBINATION TOUR. One island hopping tour in a day is just right for the 9am-4pm time frame. Two is too much. Each destination in every tour requires at least 15-45 minutes, even an hour to reach from one point to the next, plus of course the time spent in every destination. While joining two tours in a day let you see more of the island hopping destinations, this could also mean that you’d have limited time to spend and appreciate each spot in the tour.

Surely, a short trip, like a weekend getaway, is not enough to explore all the wonders that El Nido has to offer. But for those who may only have one day to spend in El Nido, Tour A is highly recommended. Some others whose time is limited opt to combine at least two island hopping tours in a single day. Unfortunately, if you’re traveling alone looking to join a combination tour, there’s little chance of finding one. This may be possible if you’re with a big group though, as it would appear like you rent a boat for private use, and decide which tours you like to combine. Most tour organizers suggest the Tour A and C combo. 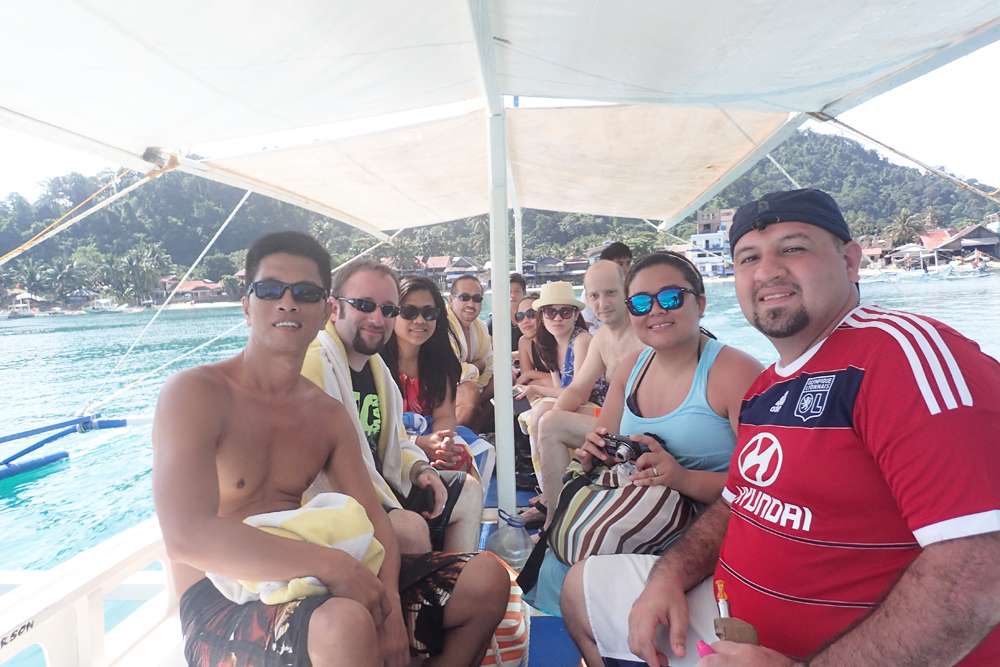 OUR FOURTH DAY. TOUR B AND C COMBO. Since we did Tour A on our first full day in El Nido, we decided to combine Tours B and C for our last island hopping tour. To avoid rushing in each of the destinations, we only picked what we thought were the best spots in Tour B, the Snake Island and Pinagbuyutan Island, and combine them with Tour C. We paid P1,400 each.

On the day of the tour, I was surprised that Pinagbuyutan Island is no longer part of the itinerary, which was contrary to what we’d agreed with the organizer a day before the tour. They added Cadugnon Cave instead, and told us we’d have our lunch stopover at the beach beside it. Though I was displeased, I let it pass. The waters fronting Cadugnon cave is a great spot for snorkeling anyway, so I welcomed the sudden change of plan. We left the shores of Bacuit Bay at exactly 9AM, but approximately 10 minutes after, we had an engine trouble so we needed to go back. It took about 20 minutes for them to fix the problem. Our guide said they’re adding one more destination to the tour to compensate, and said they would also adjust the timeframe. I hoped we’d have enough time. 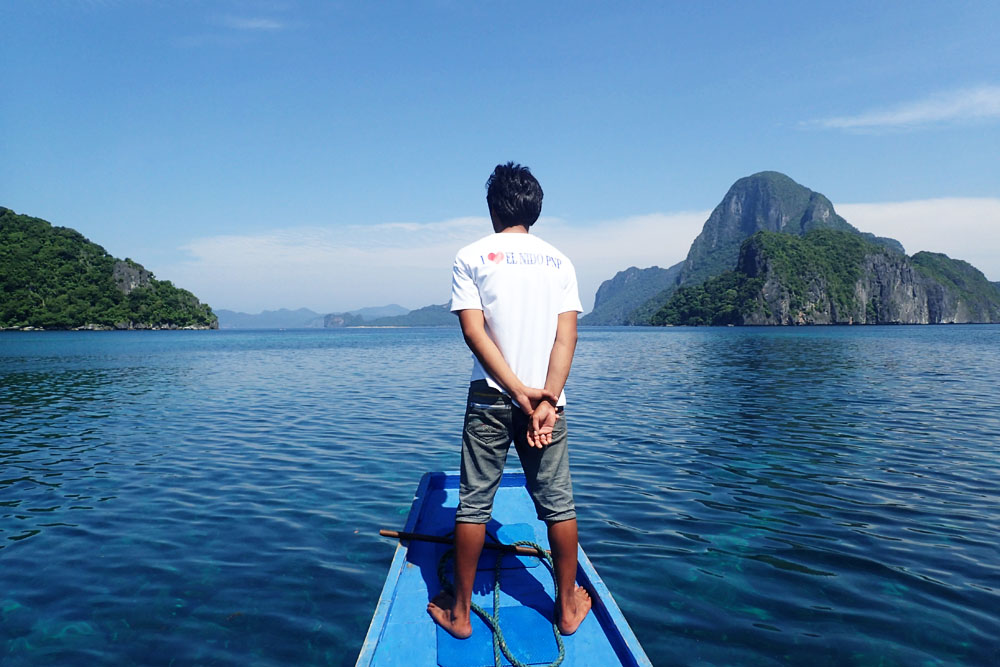 We headed straight to Snake Island, my personal favorite from Tour B. The water at the sandbar was still up to the knee when we arrived. The sandbar totally rises out of the water at noon, as the tide goes out, this is why Tour B usually stops here for lunch. 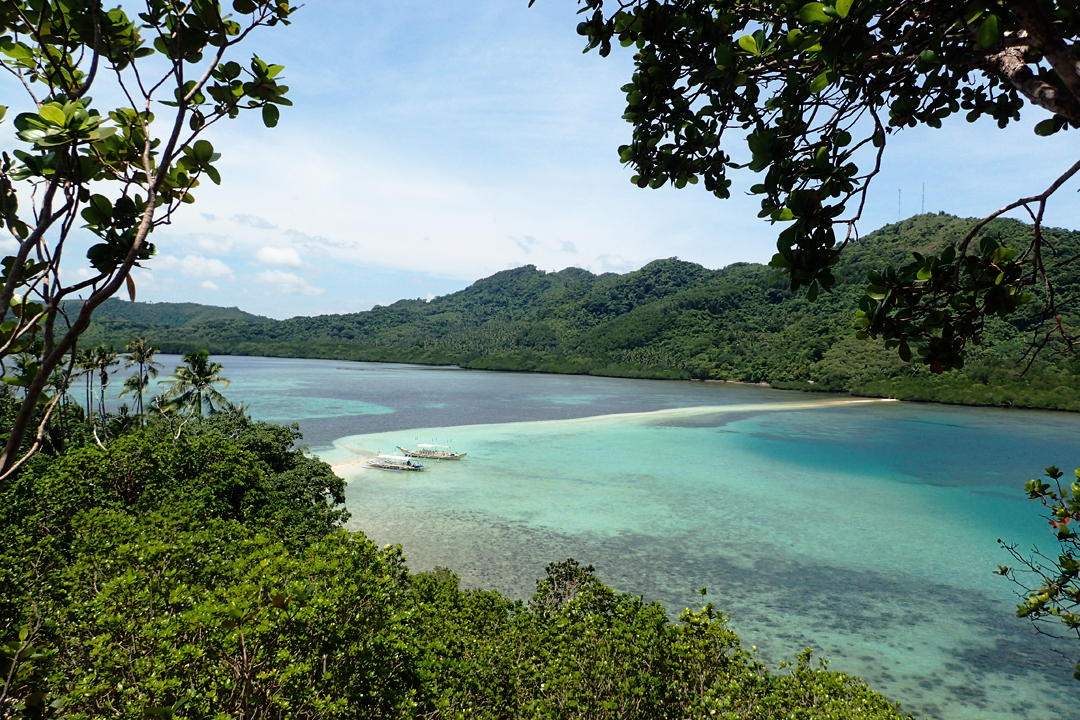 A visit to the Snake Island is not complete without taking an easy trek up to the observation deck to get a complete view of the snake-shaped sandbar. Don’t stay too long up there though, as you might miss a refreshing dip in the water and/or a relaxing walk at the sandbar. 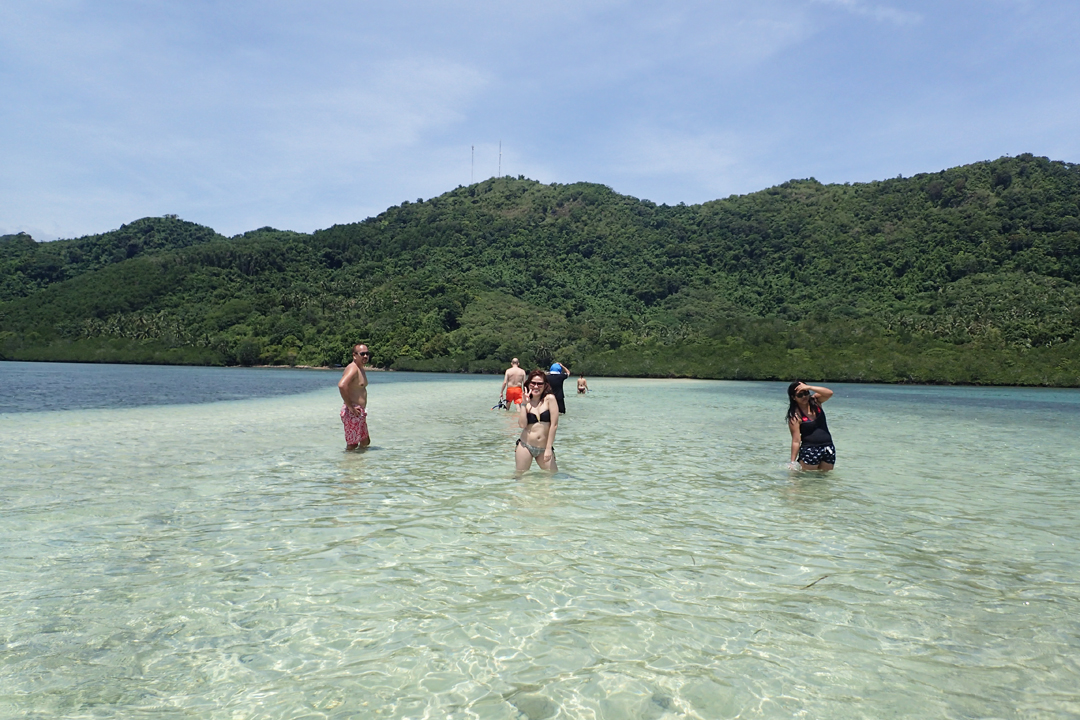 Our lunch stop was at the beach beside Cadugnon Cave. There were other tourists inside the cave when we arrived so we didn’t go in right away. We snorkeled instead, while our boatmen and guide prepared lunch. 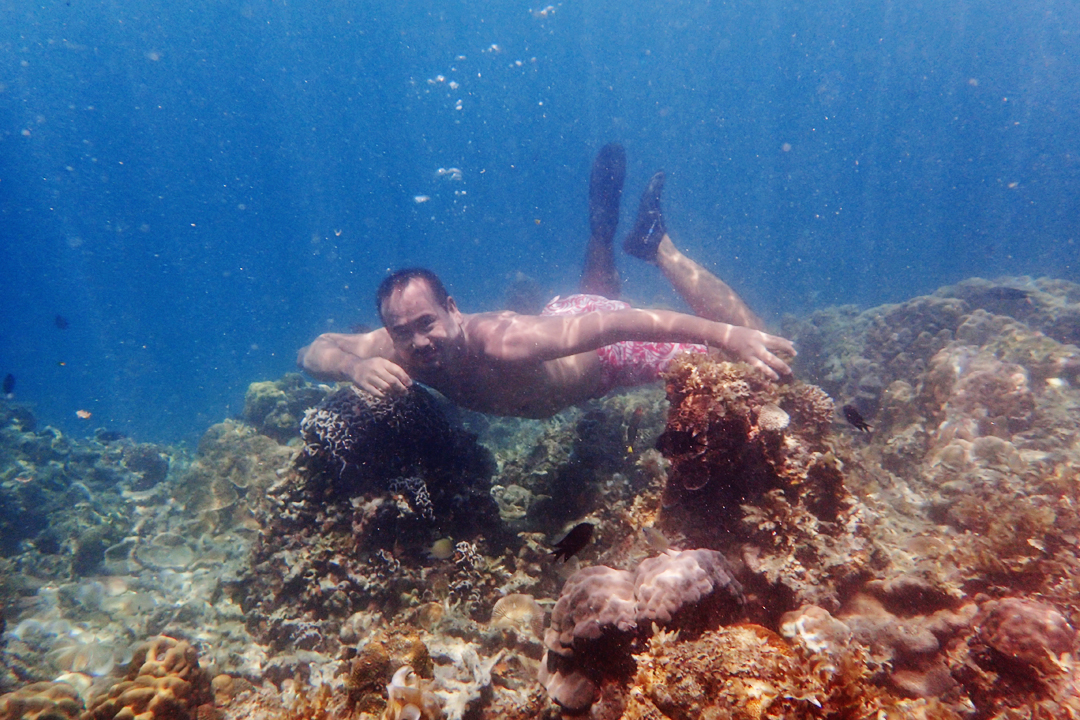 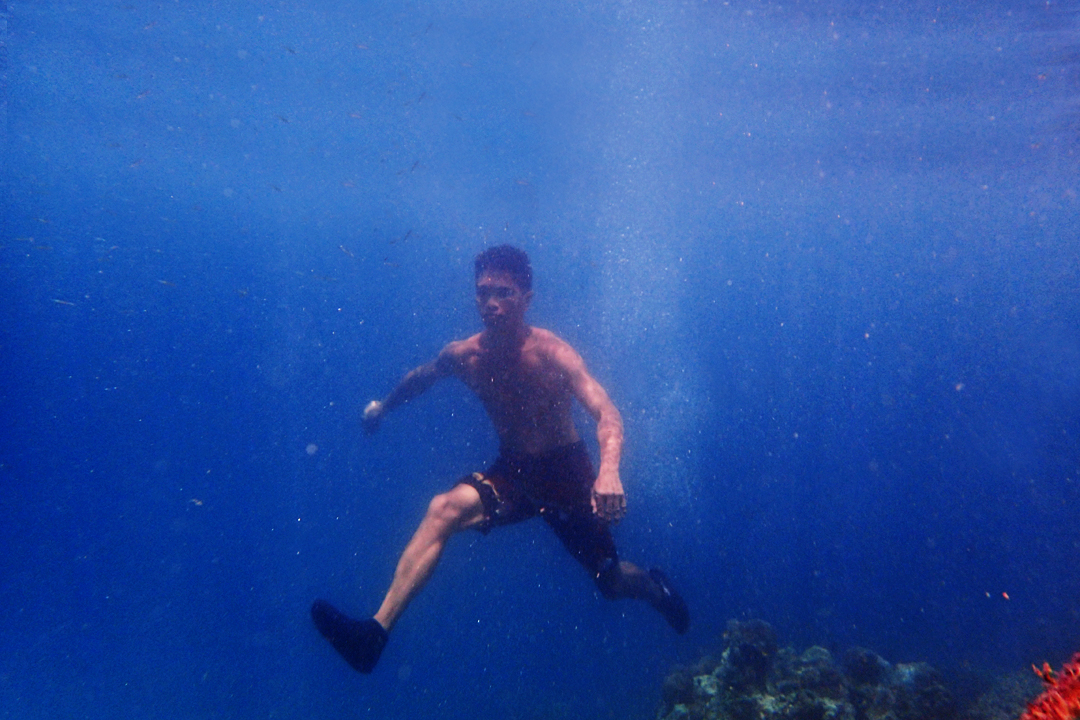 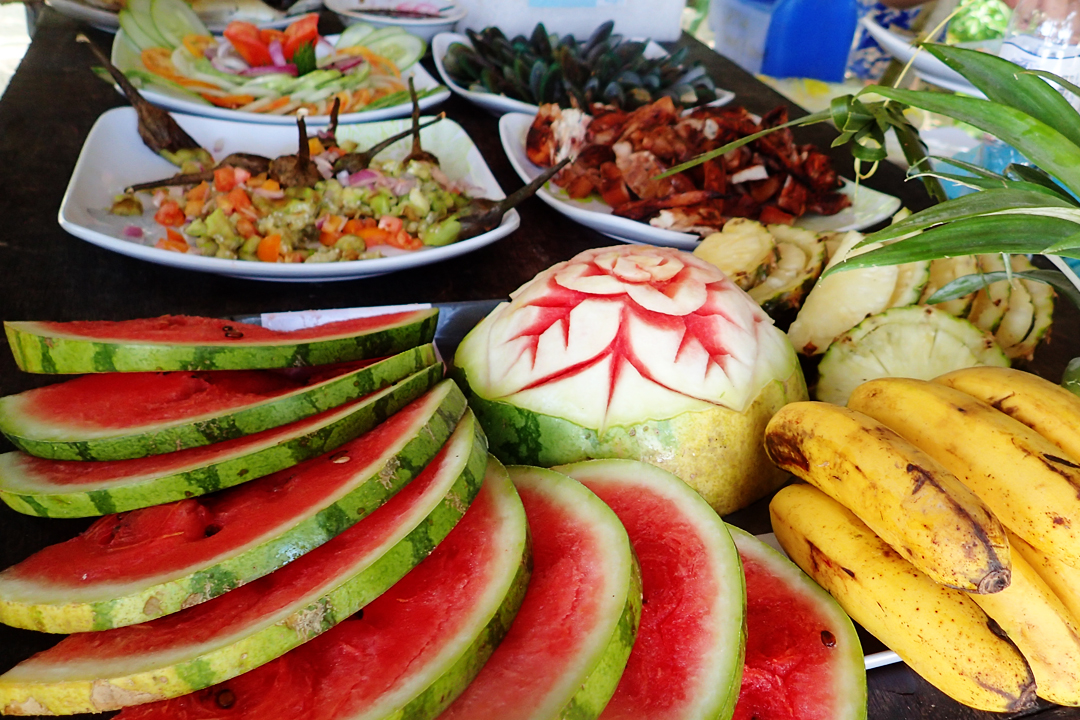 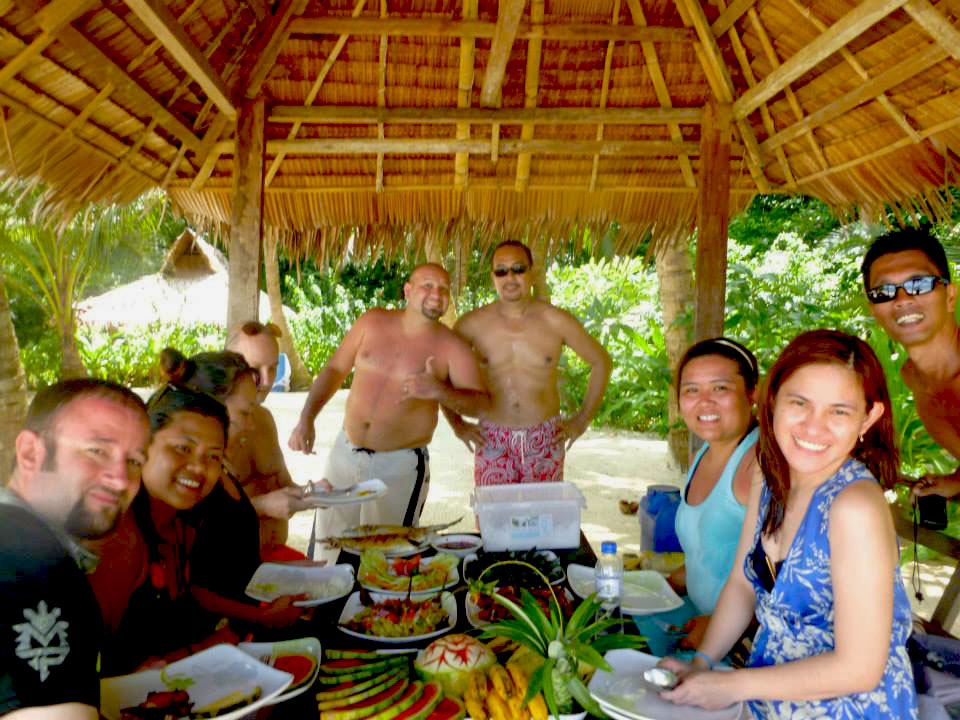 We went in the cave for a quick look of what’s inside after lunch, and then headed to our next destination. 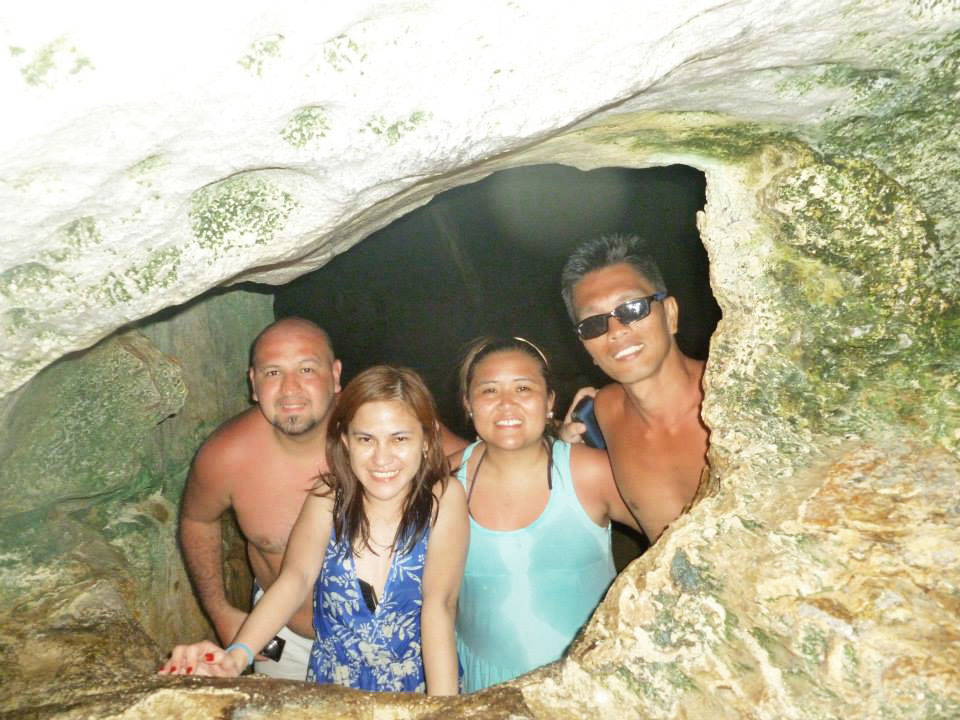 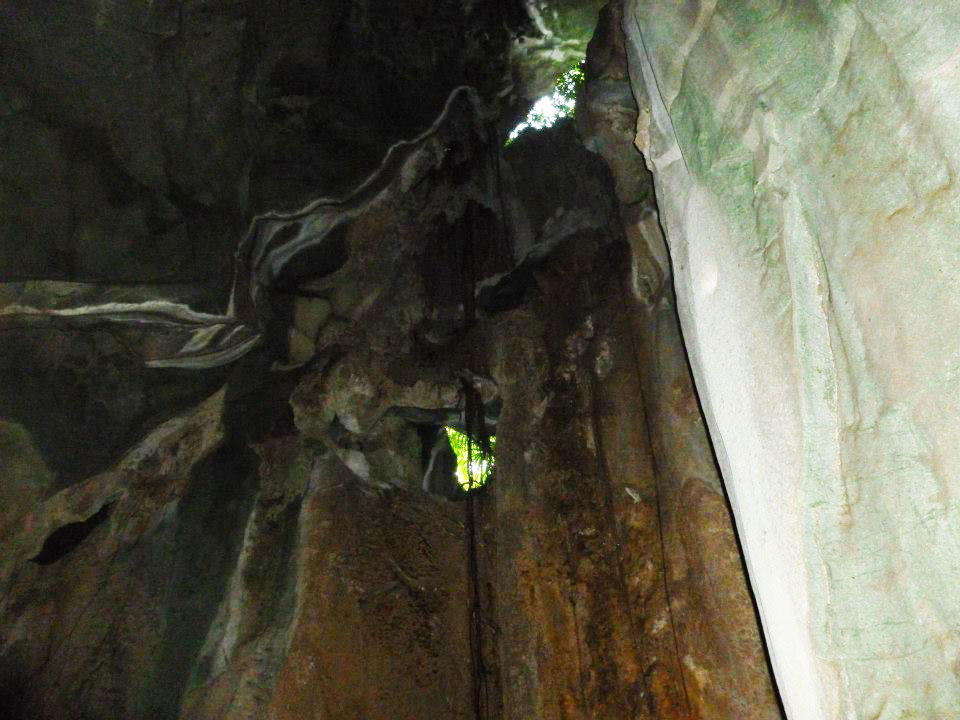 THE SECRET BEACH. It took us more than an hour to reach this spot from Cadugnon cave. The ride was far from comfortable. As soon as we were outside of those towering limestone cliffs that surround most of the island destinations, we were completely exposed to the rough conditions of the open sea. It was windy and the waves were getting stronger. Some of us started feeling sick due to the rocky wavy motions of the sea. The waves seemed to have become stronger when we reached the spot. For a while, we simply looked at the strong waves crashing into the rock walls and right through the small opening where we needed to swim through to get inside. I hesitated. What if I can’t swim well enough to go against the waves and I’d be pushed right into those sharp rocks. I shuddered at the thought.

One of the boatmen went first, his partner followed shortly after, while the rest of us simply stared and watched. When they reached the spot, they gave us the thumb up sign. Really? I was not convinced. But one from our group, Ghubz, decided to give it a try and started swimming. Jim, my regular travel buddy, followed right away. I froze up. Ghubzz and Jim, swimming right at the middle of the dangerous waves of the sea, they were beautiful to watch. It was a spectacular scene, dangerous but beautiful.

I felt a mixture of panic and excitement, and yes, envy. My stubborn self was pushing me hard to get into the water, but right sense was yelling at me to stay put. We’ll, I have always been stubborn so…yeah, I did… and it was stupid!

As soon as I got into the water, I felt how powerful the waves were. Midway, that’s when I realized I made a mistake. It was hard and exhausting to swim in the right direction with the waves pushing me, left and right. As I got nearer, Jim and Ghubzz, who’d already reached the spot, started shouting but I couldn’t understand what they were saying. I thought they were telling me to go back. I had no idea of what was happening so I stopped and struggled to stay where I was. I tried to communicate with them but the sound of the crashing waves was deafening. I was already panting and feeling really tired, so with a curse, I decided to swim forth, straight to the hole. It was such a struggle as the waves were pushing me back and forth. As soon as they could reach me, they grabbed my hand and pulled me over to where they were. That’s when I found out that they were actually telling the others not to follow us.

The waves gushing through the opening seemed to have become stronger, and I wondered how on earth could we go back. One of the boatmen made his way towards one side of the hole so he could observe the movement of the approaching waves. Proper timing was what we needed. Once he was sure it’s safe, he called us out to swim through the whole as quickly as we could. One by one, we managed to get out and swim towards the boat.

Going back was even harder and more tiring. Halfway, I almost panicked. I was feeling really exhausted that I was ready to call for help. I continued to swim forth though, with what little strength that was left in me. I was gasping for breath when I reached the boat and was almost too weak to pull myself out of the water. Thankfully, we all made it back safely to the boat. 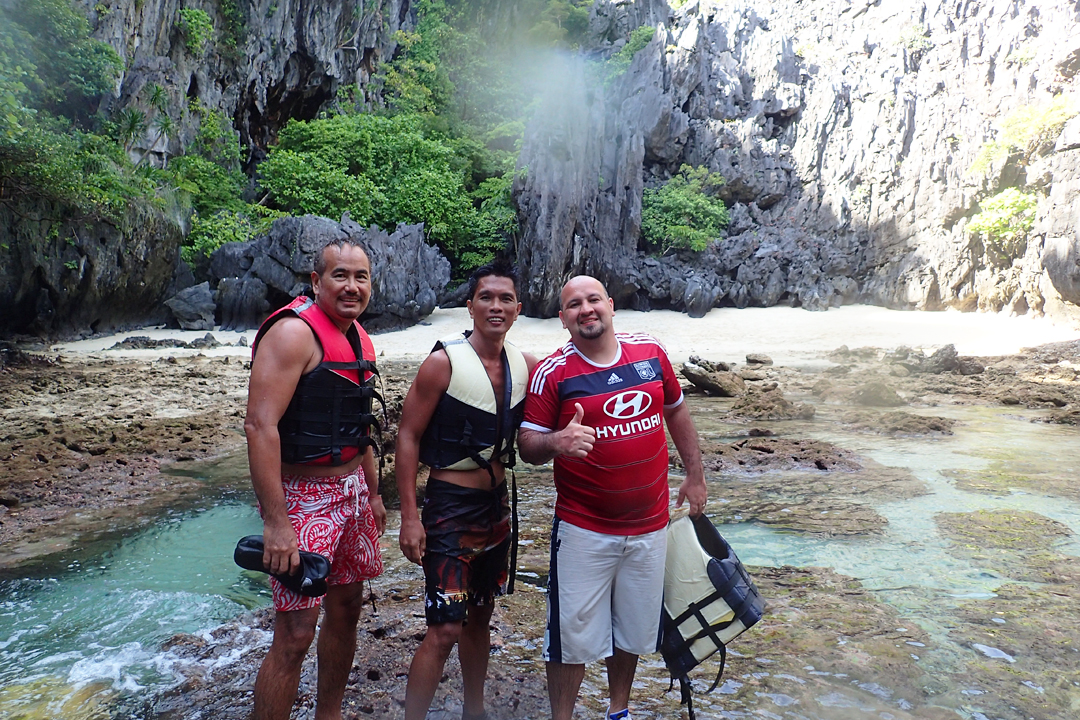 We moved on and headed to Matinloc island, our next stop of the tour. The Matinloc shrine is already abandoned, but one thing that I really liked doing here was going up the narrow, cemented pathway to see an aerial view of the bay.

Our last stop was at the Helicopter island. During my first visit, I didn’t snorkel, so I was surprised to find out that Helicopter island is actually a great spot for snorkeling. Under its shallow waters are beautiful corals and fishes of different colors. A few meters farther, and deeper, is a good destination for the diving enthusiasts. 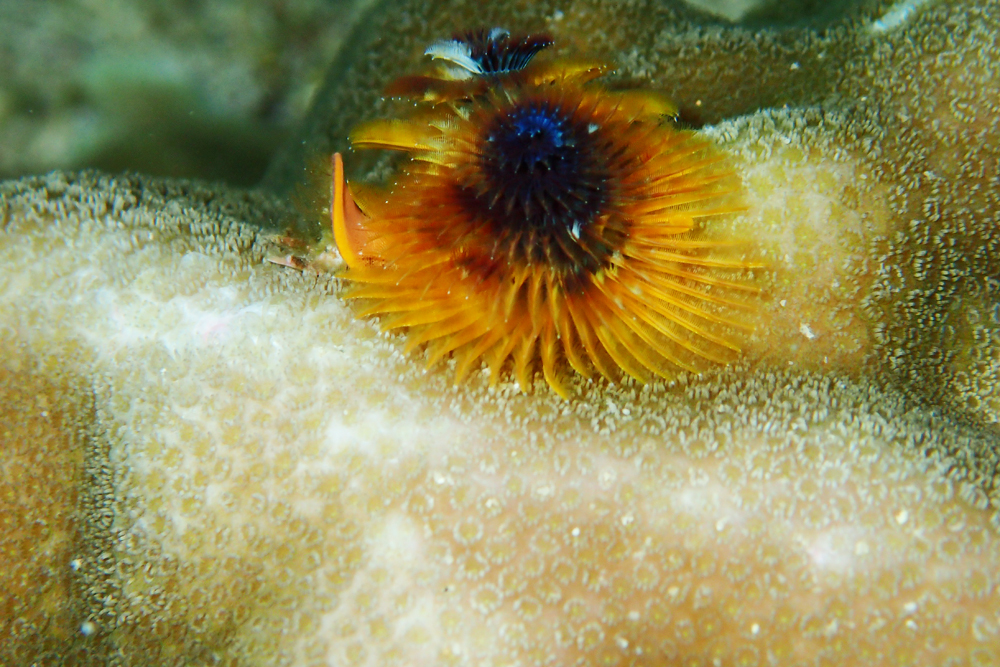 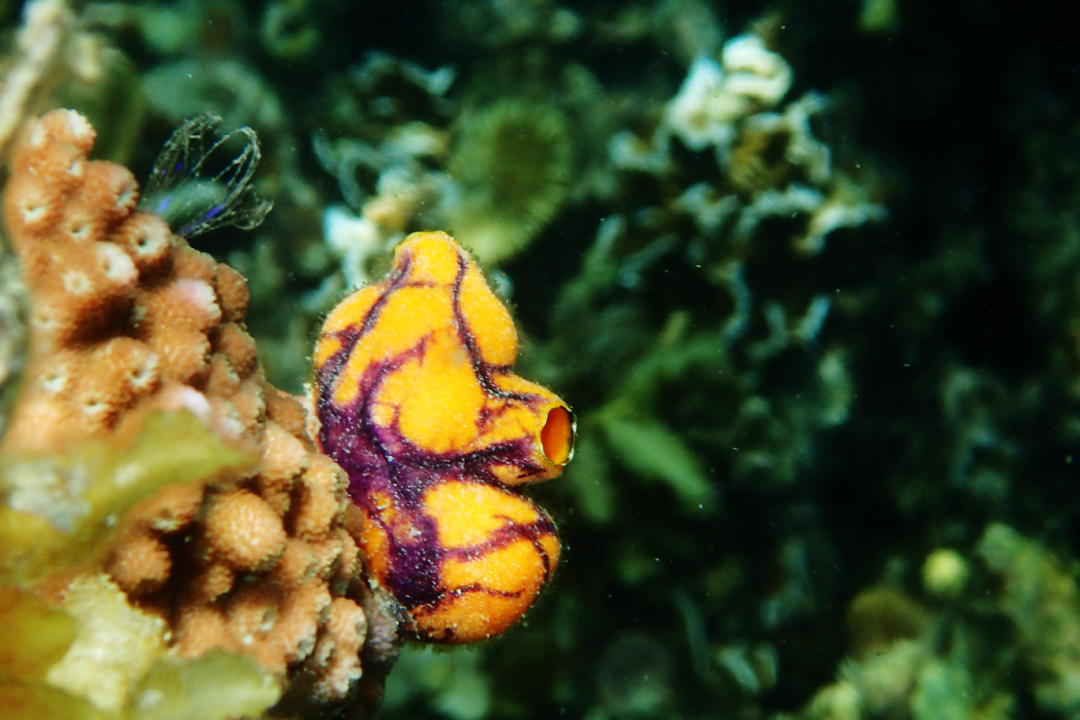 An hour later, we decided to go back to Cadlao Resort. Though we should have gone to three more destinations, the Star beach, the Hidden beach, plus the other island that was promised as a compensation, there was simply no enough time to cover all the destinations that was included in the tour. Some of us in the group was simply too tired and didn’t have much energy left to continue. Tour B and C combo was definitely too much for a day and with all our misadventures throughout the day, there wasn’t enough time for us to visit them all. 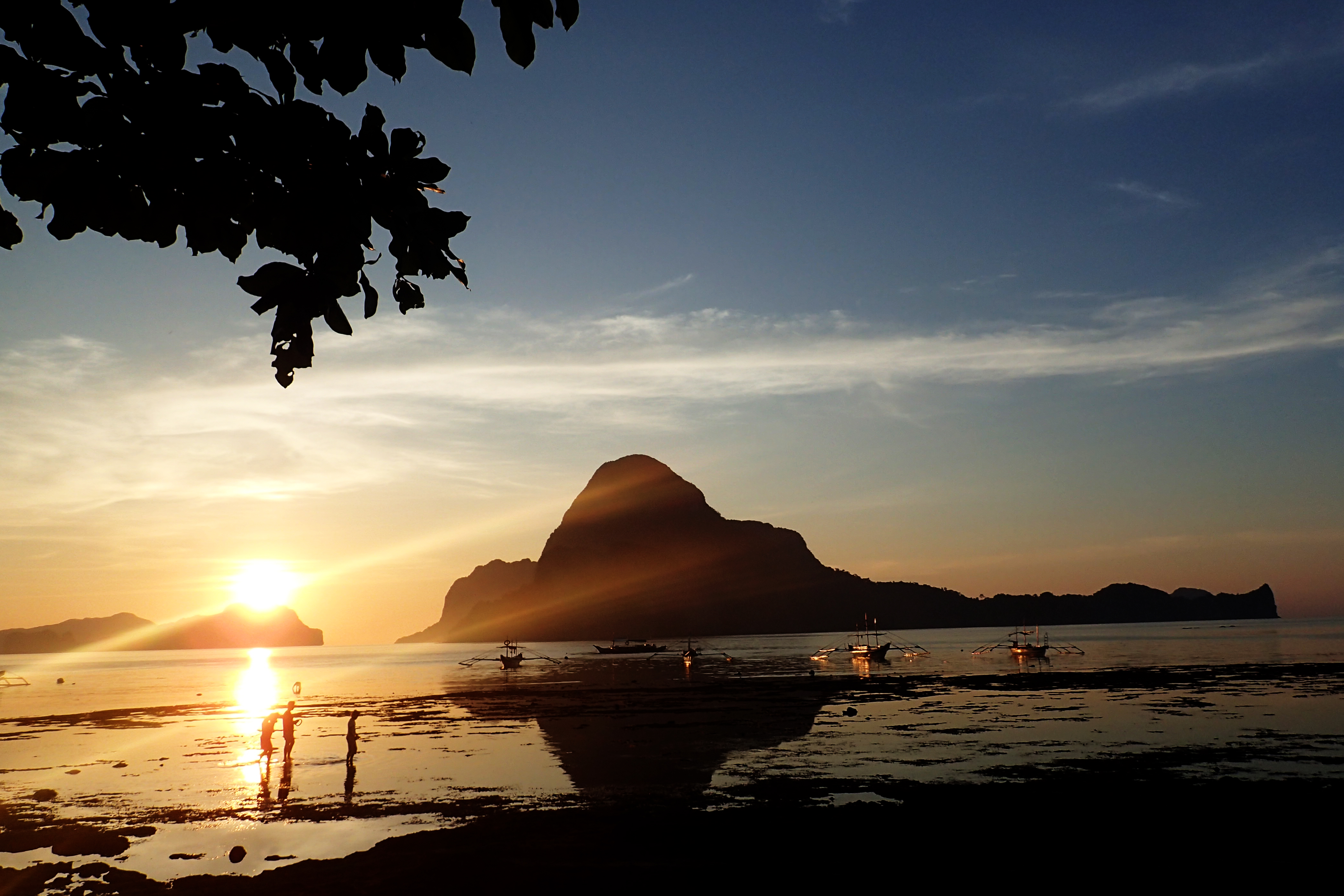 MY SECOND TRIP TO EL NIDO: A DAY OF PURE FUN AT THE TWIN BEACH OF NACPAN AND CALITANG

HOW TO GET TO LONG BEACH, SAN VICENTE, PALAWAN