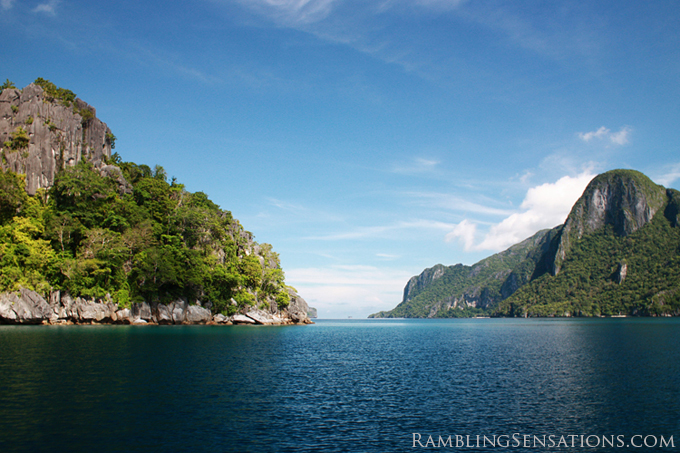 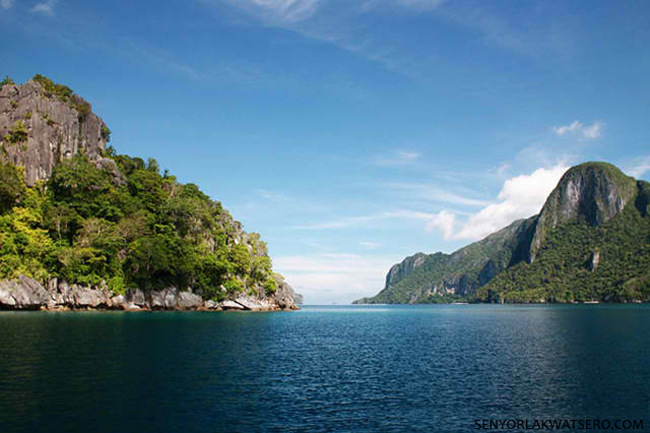 With over 45 beautiful islands surrounding this town, island hopping is the most popular and perhaps the most essential activity in El Nido. Tours are organized and standardized into tours A, B and C and they usually start at 9AM and end at 4PM. Price would range from P500-P700 (Php1200-Php1400 as of August 2014) depending on which of the three basic tours you choose to join. Lunch is already included in the package.

There are a lot of tour organizers along M. Quezon St. which is located just a few steps away from the beach. There are tour organizers that offer cheaper prices, but when shopping for a good island hopping tour package, is it also important to note that price variations normally depend on the quality of food served for lunch.

While we were checking in at Ogie Beach Pension, we were asked by one of the staff if we wanted to join their scheduled island hopping tours the next day. We said yes to their P600/per head Tour A package (Php1200 as of August 2014.) This package would take us to the Small and Big Lagoon, Shimizu (Simizu) island, Secret Lagoon and to the 7 Commandos island. 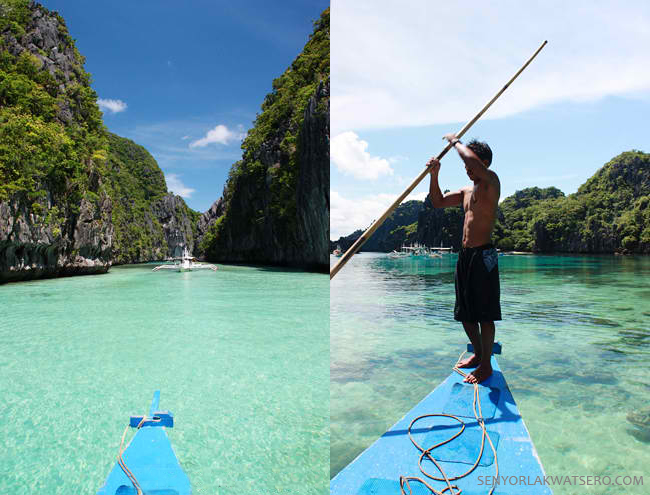 Our first stop was the Small lagoon. To get inside, we needed to swim and pass through a small opening. The only other way to enter is through a kayak. During high tide, one needs to snorkel to get inside. As our pumpboat came to a full stop, I wore my lifevest, wrapped my camera with plastic bags, and began to swim using just my right hand while my left hand was raised holding my camera. Inside, we found ourselves swimming/snorkeling in its emerald green seawater surrounded by lush limestone cliffs. We also found a small cave at the end. 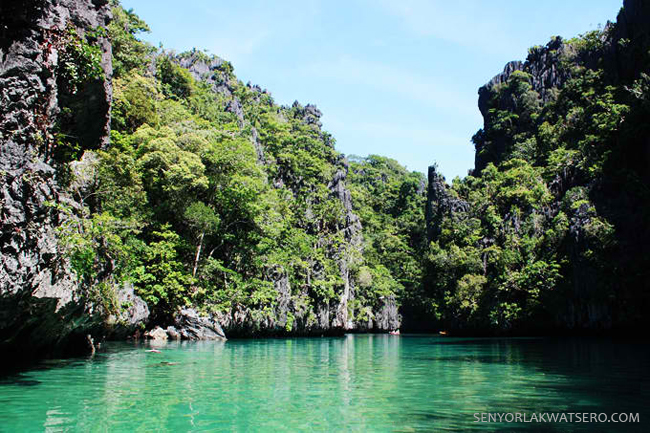 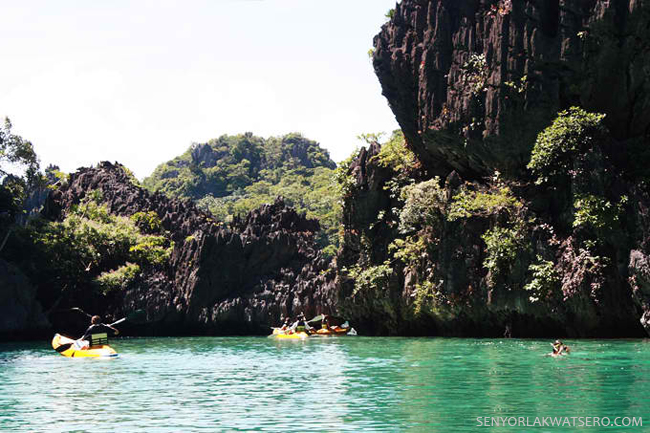 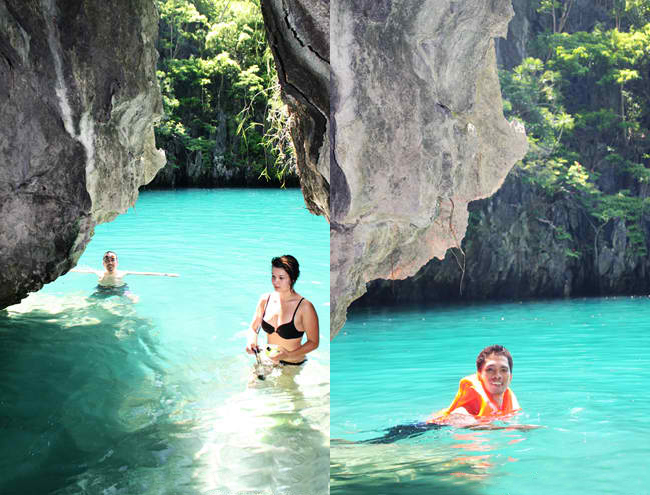 After spending less than an hour at Small lagoon, our pumpboat took us to the Big lagoon. The view in the Big lagoon was breathtaking. Although, we did not stop for swimming or snorkeling, we were amazed at how beautiful the scenery was. The lagoon is surrounded with towering cliffs and as we continued with the boat ride, the color of the water turned from emerald green to aquamarine seawater. It is said that this is the most picturesque part of El Nido, and that most of the pictures of El Nido that we see in travel magazines were taken here. It’s no wonder why “Amazing Race, a US Reality TV Show” shot one of their episodes here. 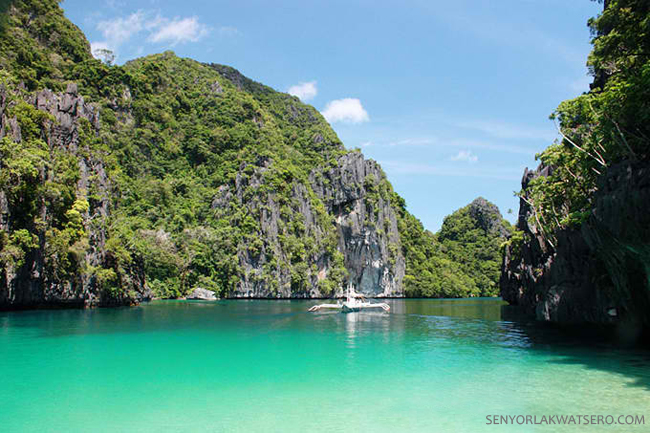 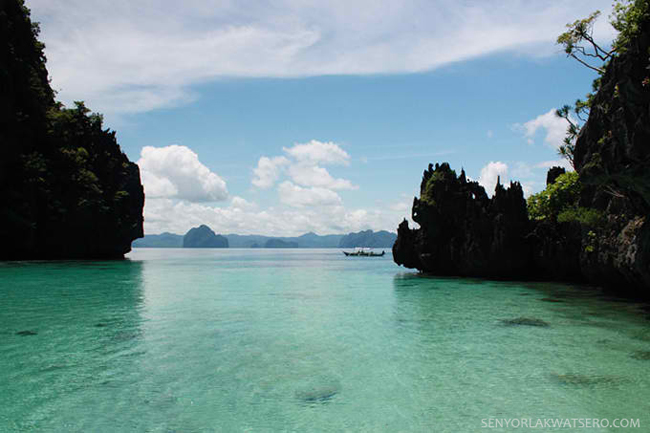 As we continued with the tour, we passed by Miniloc island, one of the private resorts in El Nido. 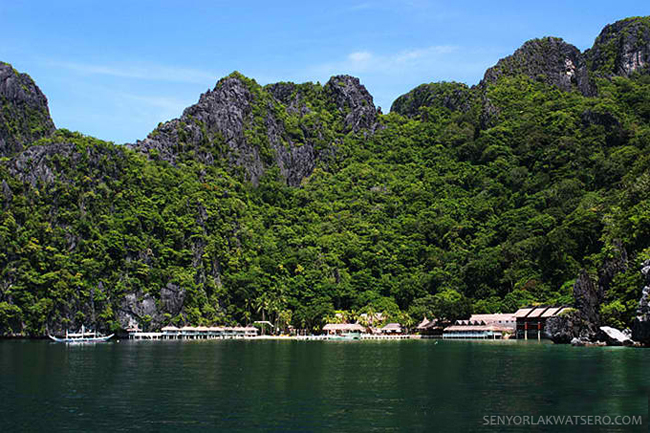 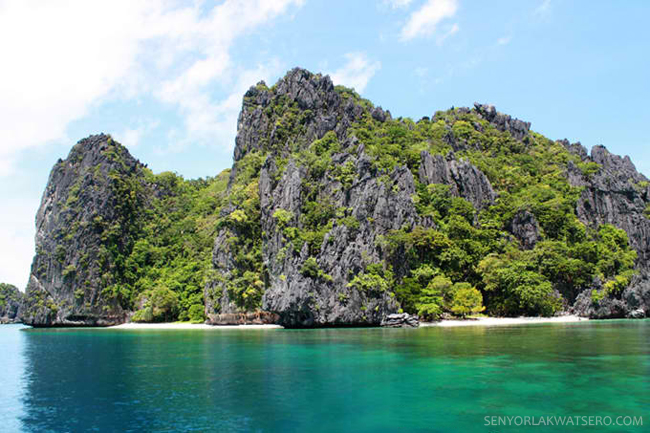 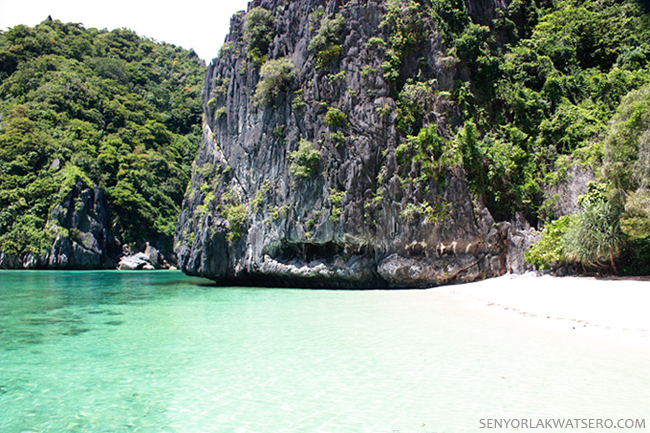 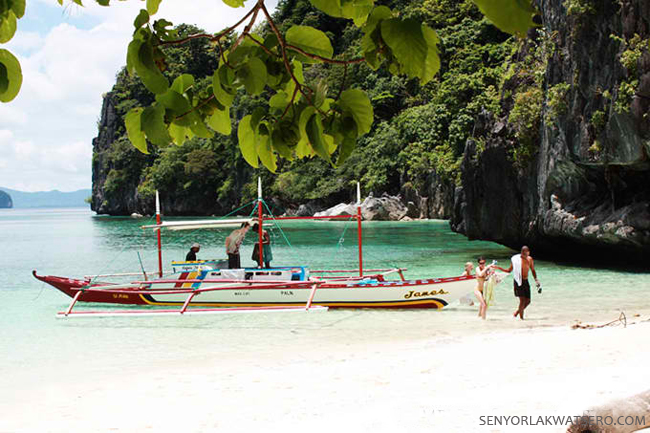 Ariel also mentioned that although the beach looked calm, the currents underwater maybe strong as a result of the impact of waves against the foot of the rock. We took that as a reminder to be extra careful. The beach is blessed with white sand and clear waters. The towering cliff a few meters from the beach serves as a magnificent backdrop. 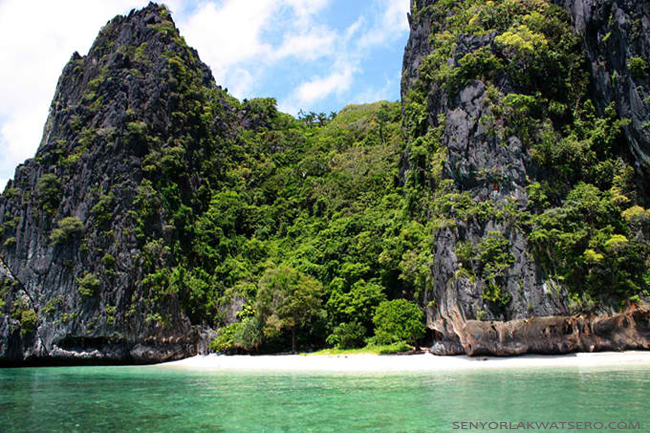 While our guide and boatman were cooking our food, we had fun snorkeling and feeding the fishes with bread we brought with us.

Lunch consisted of grilled pork and grooper fish, vegetable(cucumber, tomato and onion) salad, fruits, and rice. Lunch was lovely and there was more than enough for the 5 of us. 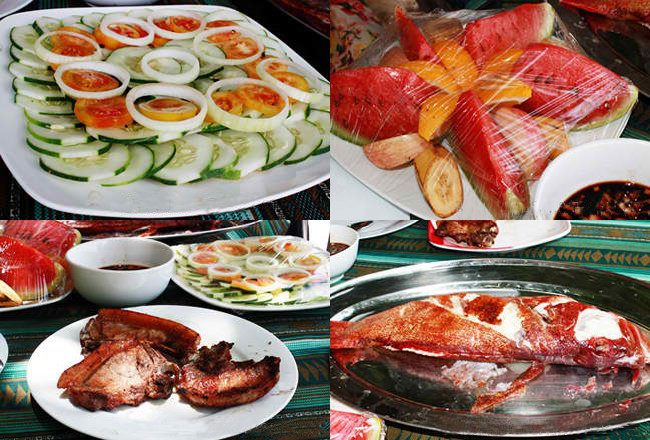 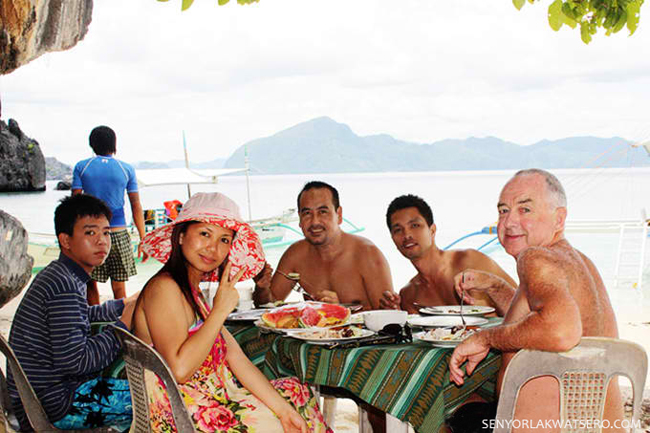 After Shimizu island, our guide took us to the Secret lagoon. It started to rain. Fortunately the rain only lasted for a few minutes.

To get inside the secret lagoon, we needed to crawl through a small opening. The lagoon is small but we were told that it’s quite deep at the center. 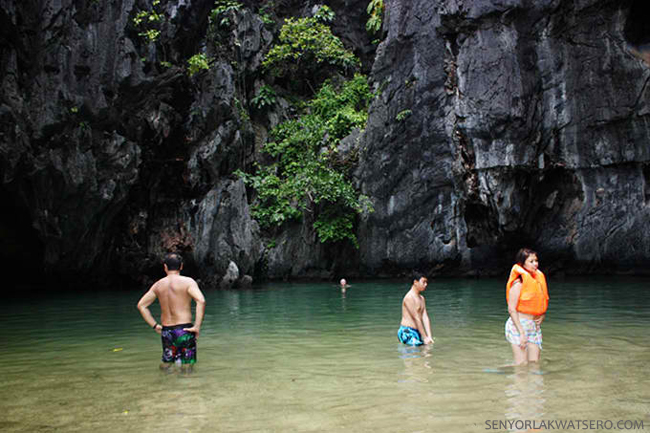 There is not much to see here. I was more impressed by the beach beside it. This beautiful white sandy beach is enclosed in a cove and bordered by gigantic rock walls. This was also where the other tourists had their lunch. 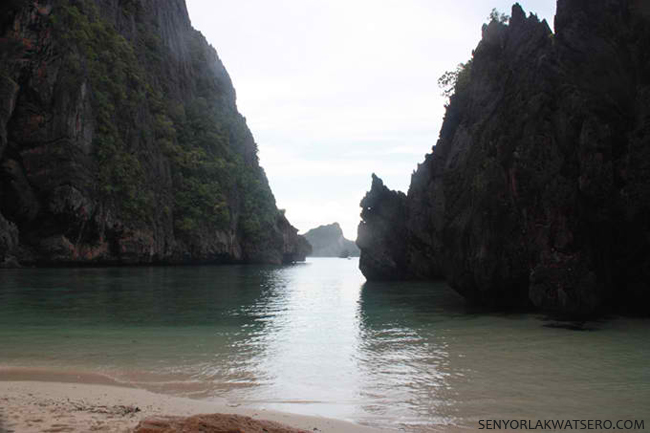 Our last stop was the 7 Commandos island. It was named after the 7 US commandos who died on the beach after infected by severe malaria in the 1980’s. This island has a long stretch of white sand beach. There is a small sari-sari store here that sells buko (coconut) juice, soft drinks and snacks. 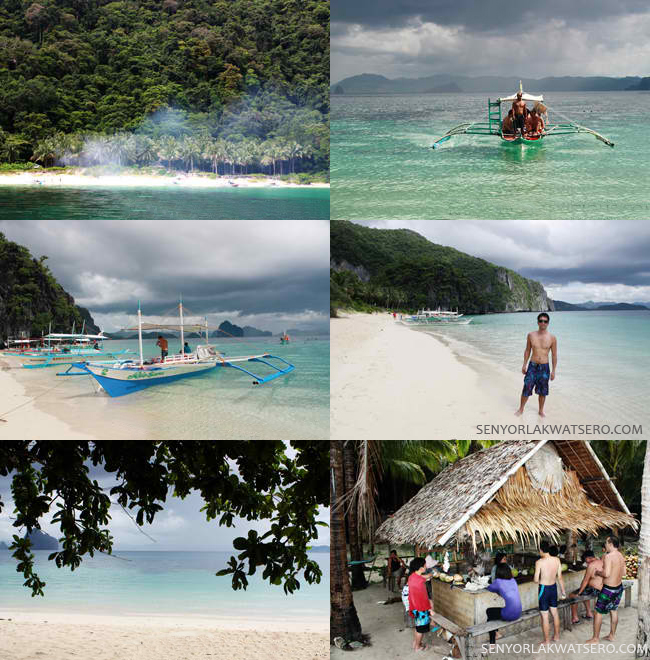 I was told that this is the perfect beach to take sunset pictures in El nido. I would have liked to stay until the sun set, but I sensed that the rest of the group were already tired and wanting to go back to their hotels. So when we were asked by our guide if we were ready to go back, I said yes, even if I wanted to stay for a couple of hours more. The water was so clear and inviting, it would have been fun to swim more while waiting for the sunset. 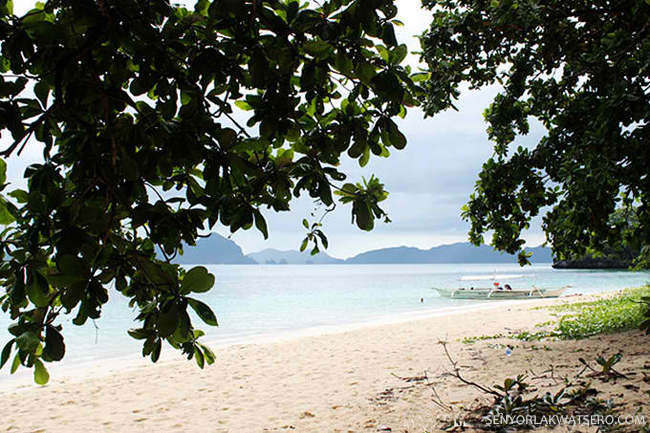 I guess I was lucky that day because while strolling at Bacuit bay an hour after we arrived from island hopping, I found myself taking pictures of this beautiful sunset – a perfect scene to end a beautiful day in El Nido. 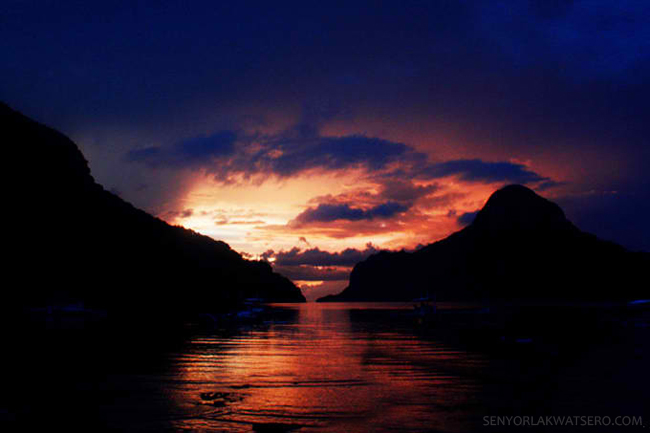 One thought on “Island Hopping Tour A: The Lagoons and Pristine Beaches of El Nido”

The Road To El Nido